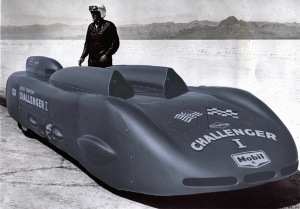 The presenting sponsor of the new show will be Gale Banks Engineering, a company that’s led by one of Thompson’s friends, contemporaries, and fellow hot-rodder Gale Banks.

“When we heard that there was an opportunity to help Tony Thacker and the Museum put this tribute to Mickey together,” Banks explained, “My only question was, ‘How can we get involved?’”

Banks and Thompson led remarkably parallel lives, both had fathers who were in law enforcement and both grew up in and around the San Gabriel Valley, a geographic area that produced more than its share of notable motorsports names, Thompson and Banks key among them.

“Mickey was ten years older and already pretty well-known when I opened my first little speed shop in 1958.” The two crossed paths often in those days but, somehow, they never became on or off-track rivals.

“What I was doing with engines always intrigued Mickey, and the progress that he was making with chassis design and tires always got my full attention,” Banks remembered.

The exhibit will feature many of the innovative machines that Mickey Thompson designed, built, and in many cases, drove into the record books, including “Challenger I” the incredible four Pontiac-engined bolide that he blasted through the 400 mile-per-hour barrier on the Bonneville salt flats some 50 years ago.

Among the pace-setting machines also set for display in Pomona is Thompson’s game-changing monoque-framed “flip-top” Funny Car, a Ford Mustang that looks like no “Mustang” before or since. Ever the innovator, Mickey Thompson, was constantly in motion, building his companies, racing his creations, and even starting what became a whole new form of motorsports entertainment, the Off-Road Championship Grand Prix.

“It’s a great honor for me personally to have the name Banks associated with both Mickey Thompson and a true racing icon Wally Parks, two men that I felt very privileged to call ‘friends,’” he concluded.

The Parks Museum at the LA County Fairplex in Pomona has been open for more than ten years, and features an interesting collection of historically-significant racing cars from just about every racing discipline on wheels.

As it should be with a “living” museum, the show at the Parks Museum is in almost constant flux. Racing machines rotate in and out of the facility, some coming in from other locations, with others going out on general loan to other organizations, or heading off to a special event where they will help to illustrate a specific story relating to the history of motorsports.

In the case of the Banks exhibit, there are a number of “working” racing machines that been in and out of the bright lights of the exhibit hall, chief among them the Banks Chevy S-10 Sidewinder Pickup. That machine was on the floor opening day and for a few months thereafter, but then the timing was deemed right for a record attempt and the dark red pickup was wheeled out and one of Banks other racers was wheeled into its place.

That little change of scene, from formal exhibit hall “queen” to serious drag strip runner resulted in a new quarter-mile record for diesel-powered pickup trucks (covering a full 1,320 feet in only 7.77 seconds at an astonishing 180 miles per hour!).

Both the new Mickey Thompson/400! and the continuing First 50 Years of Banks Engineering exhibits at the Parks will run through the end of September 2010. Family-friendly and (very) fan-friendly, the NHRA Museum offers an up-close and intriguing look at the machines and the people that made racing history and who continue to write the record books.