BodyWorks: The DOs and DON'Ts of Refinishing Pearl Tricoats -

tain color pearl mixed with a basecoat binder, which is clear or mostly transparent. The color of pearl used is determined by the paint manufacturer to be the correct color needed to match the factory color. 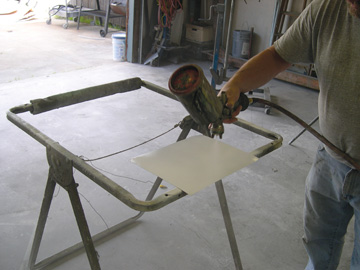 Unlike pearl mixed in clearcoats, pearls in tricoats dry like basecoats. This takes anywhere from 10 to 20 minutes.

This makes it a much more user-friendly product than pearl added to clears, which can take several hours to dry or cure.

After the pearl is applied and allowed to dry according to the manufacturer, you can then apply the clear.
After the job’s done, buff it and treat it as any other paint job. In the old days when pearl was added to clear, the pearl could be scuffed or dulled by buffing unless extra coats of clear with no pearl were applied to the top of the clear containing pearl.

Sounds simple enough in writing, so what’s the big problem you ask? Why is it hard to match pearls?

Well, the problem is that you don’t know how many coats of pearl the auto manufacturer applied at the factory. So what do you do? Do you just guess? You could — and you might get lucky — but what if you don’t? 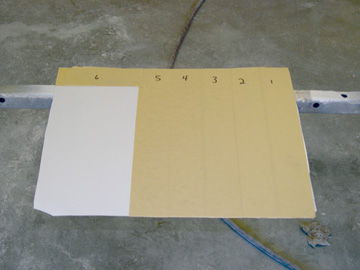 There are several ways to accomplish this, so I’ll tell you my two favorites.

One way is to obtain 3-inch-by-5-inch metal test spray panels from a paint supplier. These are commonly used to spray test samples of paint you’re trying to match.

In this procedure, you spray primer or sealer on six test panels. Then you spray the basecoat on them.

After you’ve sprayed the basecoat and allowed it to dry, you can apply the pearl coat. This is the most important step in the process. An easy way to do this is to affix the panels on a piece of plywood with tape.

After you’ve taped down all six panels, spray a coat of pearl on all six at one time. Then remove one panel and apply another coat of pearl to the remaining five.

Remove another, and apply another coat. Do this until the final panel has six coats of pearl.

Now you have six panels with one to six coats of pearl applied. After sufficient time has passed according to the paint manufacturer’s recommendation, apply the clear to all six of the panels.

After the clear is dry, take each of the panels and hold them against the finish on the car. When you find the panel that matches, you’ll know how many coats of pearl to apply for the proper color match.

Oh yeah … be sure to mark the back of the panel so you know how many coats were applied!

The second way to perform this procedure is my personal favorite. It’s basically the same except it’s performed on one metal panel approximately one square foot. You can get the bodyman to cut you a piece out of an old fender or hood, but be sure to put a strip of masking tape on the sharp edges to protect you from cutting your hands.

After you’ve sprayed the basecoat on the large panel, apply five strips of 2-inch masking tape side by side on the panel. This leaves a 2-inch strip exposed. 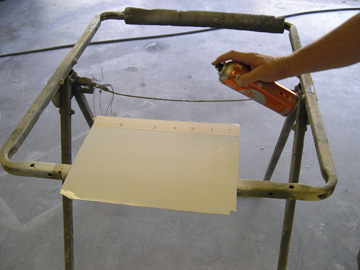 The first area that had no tape will have six coats of pearl. The second five coats, and so on — until you get to the last strip, which has only one coat.

After clearcoating and allowing the clear to dry, hold the panel next to the car to determine how many coats of pearl should be applied to match the original finish.

This procedure takes a little effort to complete, but believe me, it’s worth it. And don’t wait until you get ready to paint the car. Do it while the body work is being done, and you’ll be ahead of the game.

Mistakes Will Cost You
I was recently reminded of how important it is to determine the proper number of coats on a pearl finish. I was having lunch with a couple of friends who own a paint store. While we were eating, one of their customers was also having lunch at the same place.

It just so happened that he had brought a car over to their store to have them hand-match some pearl paint that they’d sold him that didn’t match.

After he returned what was left of the original paint, one of the paint store owners sprayed it out on a paper test panel. After four coats of pearl, the color matched the paint on the car.

He then explained to the shop owner what had gone wrong and advised him that he should put no more than four coats of pearl and it would match.

The shop owner, however, had expected to be given more paint because it didn’t match, and he didn’t have enough to re-paint the repaired area of the car.

When he was shown the color match on the card with four coats of pearl, he reluctantly paid for another pint of paint and left grumbling about his painter.

What’s funny is that my buddy paid for his customer’s lunch at the café but wouldn’t give him more paint. I guess it’s the principle of the thing.

Writer Buddy Maule performs sales and technical support for a large supplier of automotive refinish products including but not limited to paint products. Prior to this, he owned a company involved in the manufacture of paint products.