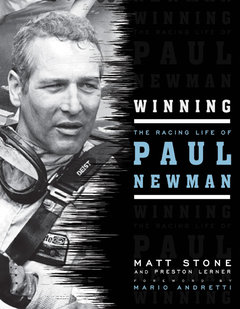 For all his fame as one of Hollywood’s great actors, a world-class humanitarian, and the proprietor of a natural food empire, the late Paul Newman had another intriguing facet that was less known and perhaps closer to his heart than all the rest of his well-chronicled life.

He was an avid, successful and well-respected car racer and team owner.

“Winning” tells that story — from Newman’s racing career, begun in earnest at an age when many race car drivers contemplate retirement; to the partnership he formed in 1983 with Chicago racing entrepreneur and team owner Carl Haas; to the impressive stable of automobiles he owned, from the Porsches and Ferraris to quirkier modified VWs and Volvos.

This is the tale of a life full of passion and skill, of someone who entered the 24 Hours of Daytona at the age of 70 and made his last professional race outing at 82; whose roster of drivers for Newman/Haas reads as a who’s who of open wheel racing; and whose interest in cars extended from the likely suspects to old trucks and new hybrids.

And then there’s the charming pal, the incorrigible prankster Robert Redford, who had a miserably wrecked Ferrari dropped at Newman’s front door. Newman returned the favor by having the car, crushed into a cube, delivered to Redford’s living room.

The anecdotes, the races, the cars — all are here, adding up to what for many would be a full life, but for Paul Newman was simply another side of a man of talent, conviction and enduring spirit.