DETROIT – The Chevrolet Volt has been named the 2011 North American Car of the Year.

The North American Car of the Year is selected by a jury of 49 automotive journalists from Canada and the United States, representing newspapers, magazines, websites, television and radio shows.

For 2011, the Volt garnered more juror votes than the Nissan Leaf or Hyundai Sonata, which were also finalists.

“It’s a great honor to be recognized as the North American Car of the Year,” said GM CEO Dan Akerson. “Since development began, we believed the Volt had the potential to transform the automotive industry. Today, the Volt is the first electric vehicle to win the prestigious North American Car of the Year award, and the first vehicle ever to receive the industry’s highest automotive, technology, and environmental recognitions.”

“Such recognition provides customers with credible, expert endorsement of new models,” said Akerson. “This is particularly important for vehicles like the Volt that feature significant new technologies. Being named the North American Car of the Year will help convince customers that the Volt is truly a breakthrough vehicle, delivering the benefits of electric driving without the range anxiety associated with pure electric vehicles.” 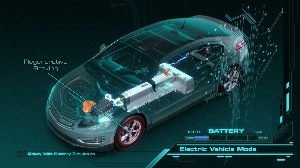 The Volt is an electric vehicle that can operate under a range of weather climates and driving conditions with little concern of being stranded by a depleted battery.

The Volt has a total driving range of up to 379 miles, based on EPA estimates. For the first 35 miles, the Volt can drive gas- and tailpipe-emissions-free using a full charge of electricity stored in its 16-kWh lithium-ion battery.

When the Volt’s battery runs low, a gas powered engine/generator seamlessly operates to extend the driving range another 344 miles on a full tank.

In December, the first Volts were delivered to retail customers in California, Texas, Washington D.C. and New York.  Due to strong public interest, Volt U.S. production is being raised to 45,000 Volts in 2012 from 30,000.