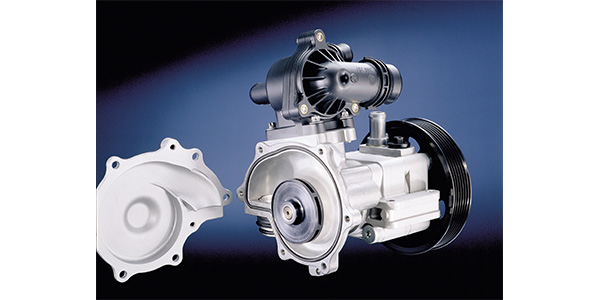 You might be seeing a trend on late-model water pumps, such that an undersized mechanical pump being augmented by an electric pump with an electronic thermostat.

You might be seeing a trend on late-model water pumps, such that an undersized mechanical pump being augmented by an electric pump with an electronic thermostat. These components, combined with the cooling fans, are working together to manage heat loads instead of reacting to them.

The majority of cooling systems on the roads react to what is happening inside the combustion chamber. After the engine is stressed, the heat causes the thermostat to open. Increases in temperatures will also cause the cooling fans to come on. The heat carried by the coolant is the trigger for operation of the fans and thermostat.

But, while the engine is waiting for the thermostat to open and the fans to come on, the heat could be changing efficiency and economy inside the combustion chamber.

Intelligent cooling systems can identify events as they happen. Instead of a thermostat opening, these smart systems will look at calculated load and throttle position to determine a course of action. These real-time countermeasures are an effort to keep the cylinder head and walls at the correct temperatures for the best possible combustion event.

The conventional water pump has one fatal flaw – the shaft speed tied to the speed of the engine. This means that an engine controls the speed, rather than the demands, of the cooling system. It is also a parasitic power draw on the engine.

During cold operation, the pump is still moving the same amount of coolant as if it were warm. It might be bypassing the radiator, but the rapid movement could extend warm-up times.

Since the engine turns the water pump, it will have to turn at speeds from idle to redline. Designing an impeller that works efficiently at this wide variety of speeds is next to impossible.

At some higher speeds, tiny “bubbles” of water pump cavitation can damage the pump. While you will never actually see these tiny bubbles, you can see the damage of cavitation that looks like metal eaten by termites.

By combining a conventional water pump and electric water pump, it is possible to create a more efficient system that has less parasitic draw and can cool the engine on demand.

By being able to actively control the temperature of the coolant, the engine management system can optimize engine performance so leaner combustion events can take place and cold start periods are minimized. It does this by minimizing sudden surges of cold coolant from the radiator side of the cooling system. This helps to keep a more consistent temperature for the engine. Most of all, this minimizes the sudden need to make the fuel mixture richer because there is a sudden drop in block temperature.

Diagnosing electric water pumps and electronic thermostats requires a scan to ensure the components are functioning and there are no codes. Sensors inside these components monitor operation of these systems, as well as look for specific outcomes when the components are activated.

The other diagnostic challenge will be the “limp home” modes these systems will use to prevent the engine from overheating and causing engine damage. This is why studying the service information will be critical.

Advertisement
In this article:cooling, Water Pumps