Directions: U.S. House Votes to Put the Brakes on E15 -

the 50% increase in the ethanol mandate issued over the past year,” said Sullivan.

“Putting E15 into our general fuel supply could adversely impact up to 60% of cars on the road today – leading to consumer confusion at the pump and possible engine failure in the cars they drive. These decisions can also negatively impact marine and other non-road engines such as boats and lawn mowers. My amendment put the brakes on E15 for the rest of the fiscal year, giving Congress time to address these questions and ensure consumer safety at the pump.”

The amendment bars the EPA from spending any money allocated this fiscal year to implement the terms of what was called its E15 waiver.

In late January, the EPA waived a limitation on selling gasoline that contains more than 10% ethanol for model year (MY) 2001 through 2006 passenger vehicles, including cars, SUVs, and light pickup trucks. The waiver applies to fuel that contains up to 15% ethanol. It is not to be confused with E85, a fuel designed for Flex-Fuel vehicles only.

In this landmark regulatory decision, the EPA had basically approved E15 for all vehicles built in the last decade – about 151 million cars, or 67% of the country’s vehicles, which together consume 75% of the country’s fuel.

EPA administrator Lisa P. Jackson made the decision after a review of the U.S. Department of Energy’s (DOE) thorough testing and other available data on E15’s effect on emissions from MY 2001 through 2006 cars and light trucks.

Following the House vote, the Renewable Fuels Association released its statement:
"Last night, political science trumped physical science. The fact remains ethanol is a thoroughly tested, safe, and effective motor fuel. Americans spend nearly $1 billion a day importing oil, often from hostile regions of the world. If the chaos in the Middle East teaches us anything, it should be that America must forcefully begin down the path of energy self-reliance. Increasing the use of domestic renewable fuels like ethanol is the first, and arguably, the easiest step we can take."

Supporters of the higher ethanol fuel blend also argued that E15 has been the most tested fuel blend in our nation’s history.

“EPA’s consideration of E15 was based on a more exhaustive study and collection of data than any of the 11 previously-approved petitions. No other fuel mix has been tested more,” said Tom Buis, CEO of Growth Energy, which filed the Green Jobs Waiver for E15 in March 2009.

Buis contends that both the DOE and the EPA have said that ethanol does not harm engine durability nor emissions equipment for vehicles 2001 and newer.

E15 Still ‘On Track’
While E15 won’t be available to consumers this year, the fuel formulation is being used on some of the most
expensive vehicle engines ever built. 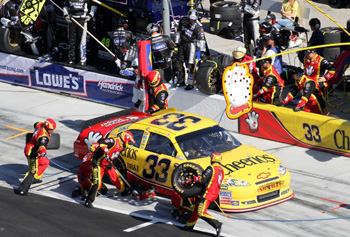 Starting with the Daytona 500 in February, Sunoco Green E15 is fueling every car and truck in the NASCAR Sprint Cup Series, NASCAR Nationwide Series and NASCAR Camping World Truck Series this year.

Some 70,000 gallons of American-made ethanol are scheduled to be used during the 2011 NASCAR racing season. The Sunoco Green E15 is blended at the Sunoco Inc. facility in Marcus Hook, PA and shipped to each track.

“We are happy our sport can play a part in creating jobs and fostering energy independence by using a renewable fuel grown and produced in America,” said France.

As the new official fuel of NASCAR, Sunoco Green E15 will replace Sunoco 260 GTX, the 98-octane, unleaded race fuel that set the standard for performance. NASCAR team engine builders said they have been testing the Sunoco Green E15 for several months, and reports have been very positive. In fact, many have reported achieving more horsepower with Sunoco Green E15.

"With Sunoco Green E15, we are leading by example, showing that this renewable fuel works in the most demanding racing environment in the world," said Dr. Mike Lynch, managing director for Green Innovation for NASCAR.
"NASCAR and Sunoco look forward to highlighting the efforts of the whole racing community to the transition to Sunoco Green E15.”

While Buis is enthusiastic about the E15 partnership with NASCAR, he said the consumers are obstructed by the recent House decision.

"The House has denied consumers choice in the type of fuel they use. Instead, they have chosen to continue giving oil companies a virtual monopoly over the fueling system. Our dependence on imported oil is neither safe nor sustainable,” Buis said.
“As the world’s largest oil companies tell us they can’t find new sources of oil, this House measure would seek to relegate future generations to a preventable future of oil dependence."

Buis said the E15 waiver would allow Americans to have more fuel choices. In fact, last summer, Growth Energy introduced the Fueling Freedom plan, a proposal that would open the transportation fuels market by investing in ethanol infrastructure like blender pumps.

Using a blender pump, consumers can choose whether they want no ethanol, all the way up to 85% ethanol for Flex Fuel vehicles.

However, in a related action, the House also last month passed a separate amendment, offered by Rep. Jeff Flake
(R-AZ), that blocked funds for a tax subsidy that supported building these fuel pumps that blend ethanol and gasoline, as well as separate fuel storage facilities.

The E15 waiver measure now goes to the Senate, where ethanol enjoys more support. We will provide updates on this issue as they become available.