According to E85Prices.com, E85 ethanol is no longer a Midwest only fuel —  E85 has spread to both coasts. In fact, five years ago, California had no cities selling E85, and today E85 can be found in 16 California cities including Los Angeles and San Diego. Maybe more impressive is Las Vegas, NV, where E85 can be found at 17 stations. 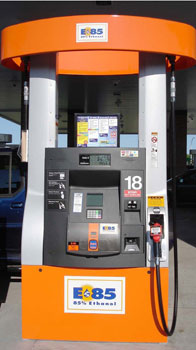 On the East Coast consumers in the State of New York can find E85 in 20 cities and in the South, even the Oil State of Texas has 35 cities with E85.

E85Prices.com expects these trends to continue as the Obama administration supports the Renewable Fuels Standards act of 2005 that requires 36 billion gallons of ethanol by 2022, 16 billion from cellulosic materials.

There are already 10 million E85 flex fuel vehicles on the road. That number is set to rapidly expand as the US Auto Industry has pledged that by 2012 at least half of their production line will be E85 flex fuel vehicles. GM, Ford and Chrysler have 36 FFV models for 2009. At a conversion cost of just $100 per vehicle it is an inexpensive path to giving consumers an actual choice at the pump as well as lowering our dependence on foreign oil.

According to the EIA (Energy Information Administration) ethanol as E10 as well as E85 is displacing 6% of our gasoline needs. This ethanol displacement is a major contributor to the lowering of demand for oil and keeping all fuel prices low. The current national prices are $1.79 for E85 and $2.03 for gasoline.

As long as ethanol production and usage increases the demand for oil will decrease keeping gasoline as well as ethanol fuels competitively priced for the consumer.

E85Prices.com is the first and only site dedicated to covering the price of E85 ethanol, and has more than 3,000 members reporting prices around the United States.

Of course, E85 has had it’s share of critics, and some believe that more ethanol in our nation’s fuel supply actually increases gas prices, as well as corn and other food costs.