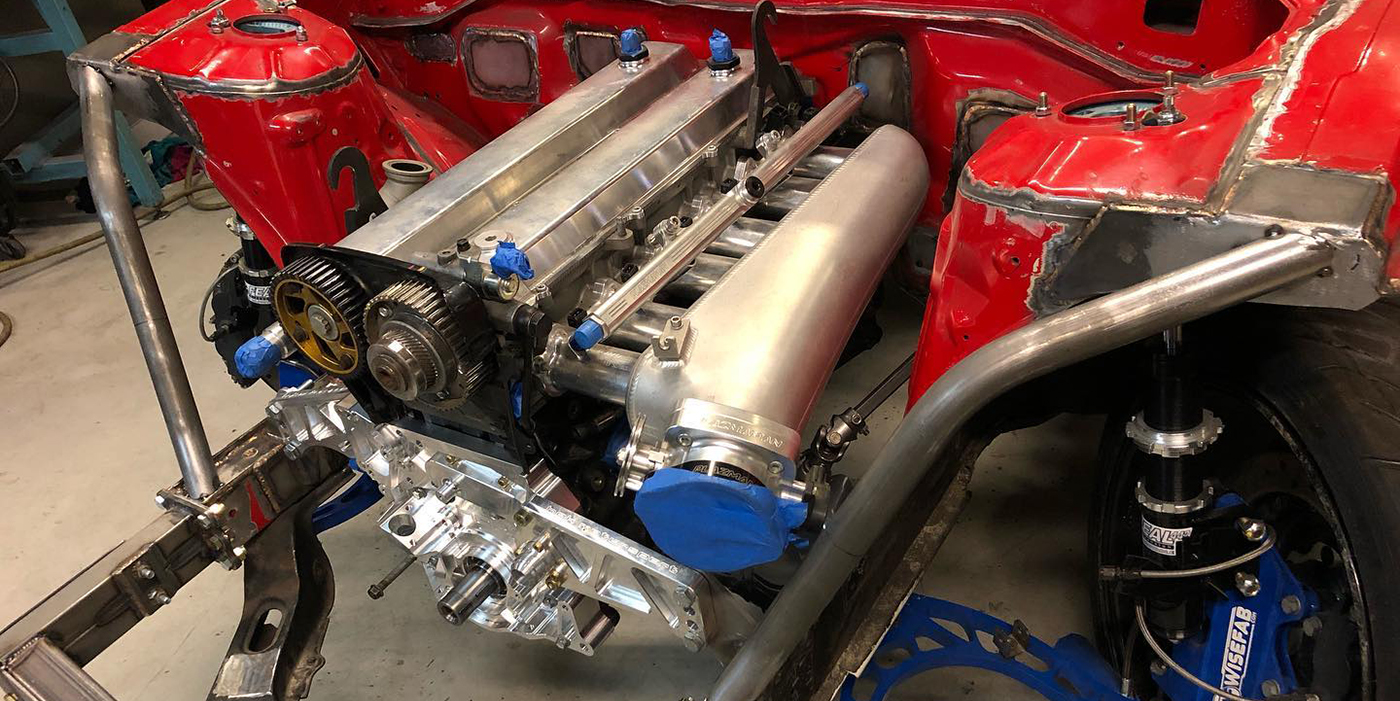 Brian Wilkerson was still finishing high school when he decided to join his older brother in starting a business selling car parts. Called MA-Motorsports LLC, Brian says it was similar to a small speed shop at the time.

Before long, Brian’s older brother lost interest and Brian took over the operation with the drive to get more hands on. “I dug in and hired on a friend to help me wrench on cars.”

Selling parts and doing some work under the hood wasn’t all Brian was interested in. He was also a huge fan of driving cars to their limits.

“As far as what got me into cars in the first place – I always liked taking things apart and putting them back together,” Wilkerson says. “My father also had cars, and was and is, into Porsches. That’s where it all started. I got into doing track days with the Porsche Club and going fast and always craving more.”

Brian got introduced to drifting in 2004 and things started to really take off from there. His driving and wrenching career blossomed substantially as he was traveling around and making a name for himself as a driver and for the business at MA-Motorsports in Glen Arm, MD.

“We’ve always built high-performance road cars and we’ve gotten known for building drift cars as well thanks to my own outings as a driver,” Wilkerson says. “I was a professional driver for Formula Drift very briefly and did a lot of amateur drifting in the mid-2000s. We started working with Chris Forsberg, who’s a professional drifter, in 2012. My business partner and I, at the time, really devoted ourselves to his program. We earned a record number of podiums and two championships over the course of six years working with him. That obviously got the word out about our business as well.”

MA-Motorsports grew its business by building Nissan SR20s, which the shop had a lot of success with.

“We were one of the first people to do a VVL cylinder head,” he says. “We were one of the first people to take one of the front-wheel-drive SR20VEs – basically like Nissan VTEC – and put one of those heads on a rear-wheel-drive block. That thing made some pretty good power. Just like the Honda VTEC heads, the rockers are all on a rail. Other, standard Nissan SR20s, they just sit under the cam and on the lifter. They often fly off at high RPM and we didn’t have that problem with the VVL heads. From there, we started working on all kinds of different cars and engines over the years, but mostly Japanese stuff.”

Today, Nissans and drift cars have remained the focal point at MA-Motorsports, but the six-employee, 9,000 sq.-ft. shop also does work on road race and street cars as well such as BMWs, Mustangs, Toyotas, Mazda Miatas and other vehicles. The shop also handles most of the vehicle work in-house, but does send out its machine work, body work and wiring.

“We are a full-service racecar fabrication shop, whether we do it all under one roof or we can help facilitate outsourcing services that we don’t offer here,” he says. “We do as much as we can in-house, mostly fabrication work. We do motorsport plumbing – really high-quality, crimped together, Teflon lines, or hard pipe plumbing on race cars. We do lots of fabrication and mechanical work. We don’t do body work. We send that out every chance we get. We don’t do any in-house wiring anymore. We do farm that out. Engine assembly we do here, but machine work gets done at our local machine shop, which is AHM Performance, and we’ve been doing business with them for 20 years. They do really good work and that’s why we keep sticking with them.”

One of the bigger projects MA-Motorsports has been working on recently is Mike Power’s Nissan Silvia S15. Mike is an up-and-coming driver for Formula Drift Pro2 and his Nissan is getting the full MA-Motorsports treatment, including a turbocharged 3.0L Toyota 2JZ engine.

“This is our current, big project in the shop as far as a full car build and everything being done in-house,” Wilkerson says. “We started this build last fall. We’re hoping to be testing this car by the end of July. We had sold [Mike] some parts in the past and he’s kind of always wanted a car built by us completely. He finally made the jump and brought us a chassis.”

The chassis, as mentioned earlier, is a Nissan Silvia S15. It’s a Japanese only model, which resembles what would have been a third generation 240SX here in the United States, if such a thing existed here.

“It was originally right-hand drive converted to left-hand drive,” Wilkerson says. “It’s a fully built car. There isn’t much original left on it. It’s a full-blown race car. The engine in the car is a 3.0L Toyota 2JZ with a factory crank. It has forged CP pistons and forged Carrillo rods. We sent the head out for porting. It’s got GSC cams in it. It’s using a billet Dailey dry sump, which is somewhat unique. It’s also using a motor plate, which not many people mount these engines with motor plates, but it’s using an HGK Racing billet motor plate.

“Between the dry sump and the motor plate, we should be able to locate the engine a little further down and a little further back, which will help offset the weight of the inline six. It’s also using a Plazmaman sheet metal intake manifold, a Garrett GTX 3584 RS turbo and a little bit of nitrous from Nitrous Express for under-the-curve boost. It’s a 75 shot dry set up that’s run off the ECU. The short block was assembled by Titan Motorsports.”

Most of the plumbing was replaced and most of the factory sheet metal was swapped for fiberglass or carbon body panels. The Nissan also has a rear-mounted radiator as is kind of par for the course for a professional drift car.

“You need a really strong valvetrain and heat management are very important in drifting,” he says. “The cars don’t go straight, so they don’t get a lot of direct airflow, which is one of the reasons we put the radiators in the back of the car. We do that for both weight distribution and also to get airflow from all over the car by pulling it through the rear window.

“Drifting sees a lot of on/off throttle, more so than probably any other motorsport. You’re always up and down in the rpm range, so you really do want a pretty broad torque curve unlike drag racing or other forms of motorsport where you’re on throttle the whole time. Due to that, things like turbo lag are a really big deal in drifting, so we would size a moderately sized turbo on an engine and then use nitrous to help spool to keep the mid-range rpms from dropping.

“Another thing in drifting is you can see a lot of rev limiter. This particular engine is going to be around 7,800 rpm. Chasing another drift car, some of us will get our gearing spot on because we use a quick-change rear end and you can kind of keep yourself in the power band, but oftentimes you’ll be banging the limiter too, which is another reason for the really sturdy valvetrain.”

The gearbox on this Nissan Silvia S15 is an Andrews A431 4-speed dog box. The car uses a quick-change differential, which helps with gearing and keeps you in the power band. “There’s a lot of cool aspects to these cars,” Wilkerson says.

The Nissan Silvia S15 is nearly complete, and the next step is to get the car and it’s Toyota 2JZ engine on the chassis dyno. MA-Motorsports estimates the engine should make 800 wheel horsepower.

For customer Mike Power, 2020 would have been his Formula Drift Pro2 rookie season, but COVID-19 has postponed those plans. However, Mike’s Nissan Silvia S15, featuring a turbocharged 3.0L Toyota 2JZ engine, will be ready to go when racing resumes!