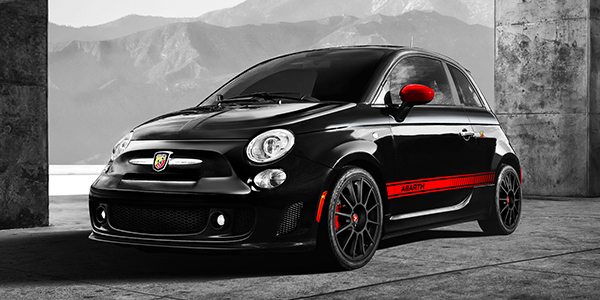 It can be difficult to diagnose why a bearing has failed. By the time the vehicle is brought to the shop, the initial damage has been concealed by a complete failure of the bearing.

It can be difficult to diagnose why a bearing has failed. By the time the vehicle is brought to the shop, the initial damage has been concealed by a complete failure of the bearing.

This 2014 Fiat Abarth was brought in with the customer being concerned about a noise coming from the left rear. He was convinced that it was a tire. The noise was cyclical and it increased with speed. During inspection, the bearing had no detectable play, the tires were evenly worn, and no ABS wheel speed sensor codes were present. On the lift, the left bearing was significantly noisier than the right bearing when turned by hand. But, no extra play could be detected. 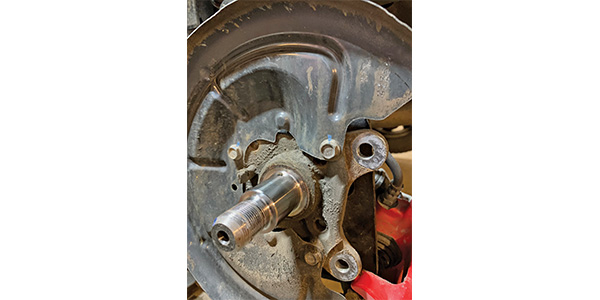 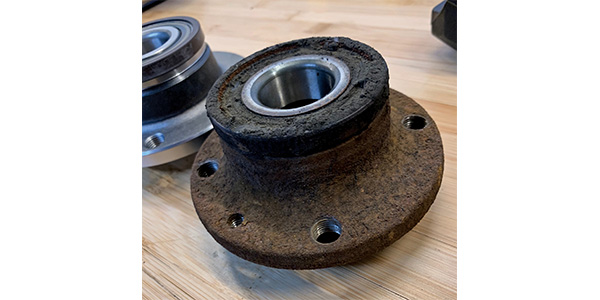 Wheel bearings never wear out; they fail. If a bearing is properly sized and the lubricant does not break down, the bearing should last a very long time. But, if the bearing is subjected to high loads and impacts, the rolling elements and lubricants can damage the races and create noise and play.
The seal may be the cause of the rear wheel bearing failure. The grease can be seen on the outside of the bearing’s seal and on the area around the axle and brake dust shield. This area should be dry and free from grease. But, what damaged the seal?

It is difficult to say why the seal failed to keep the grease inside the bearing. The damage could have occurred as a result of external factors, like heat from the brakes, corrosion on the stub axle or installation errors. But, internal factors like high loads and bearing surfaces can increase the heat and cause the grease to expand and force it out of the seal 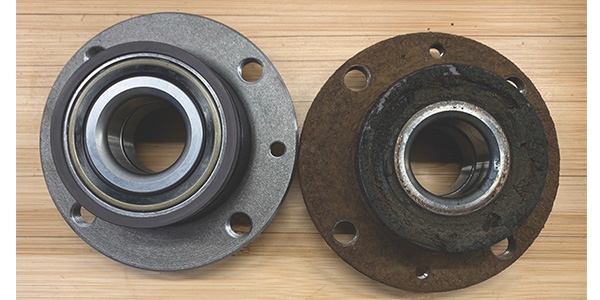 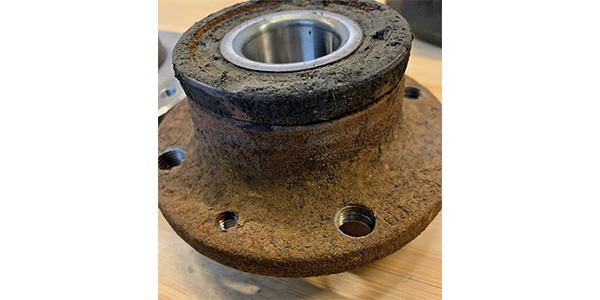 This Fiat has active wheel speed sensors. There is no metallic debris on the sensor’s head. Instead, the particles stick to the encoder ring, which is a series of magnets.

This photo shows the encoder ring for the wheel speed sensor. On this Fiat, it is mounted on the outside of the seal and not on the face. The ring has collected metallic particles from the brakes and road debris. The customer did not report any ABS or stability control malfunction indicator lights. But, if enough metallic debris sticks to the encoder ring, it can cause codes and possible false activation. 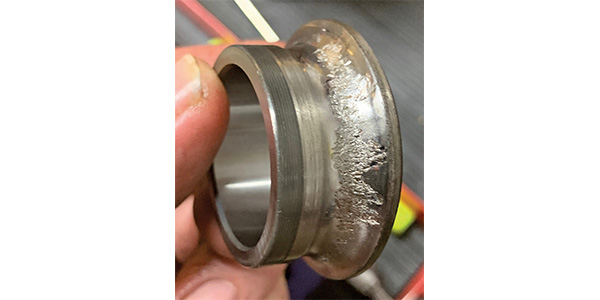 With the bearing on the bench, the inner race can be removed. This type of damage is called “spalling.” The area of the race has been exposed to higher-than-normal loads and high heat. This causes the heat-treated surface to fatigue in a pattern called spalling. What has occurred is a small defect in the race. This small defect causes heat as the rolling elements travel over the flaw. This can damage not only the metal, but also the grease.

Is there a way to prevent this from happening again? It is impossible to redesign the axle to accept a larger bearing to take higher loads, and it is also impossible for drivers to avoid hitting all of the potholes and curbs. The only way to make sure the new wheel bearing will survive is to use high-quality parts and follow the correct installation procedures.