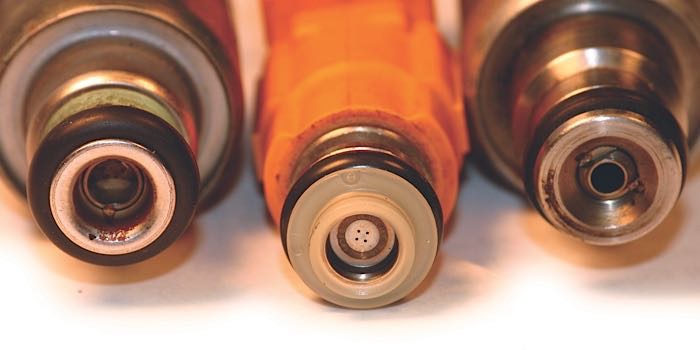 In the U.S., the quality of the fuel we put into our vehicles is very high. By the time it travels through the fill neck, it has been filtered twice at the station. Before it gets to the fuel rail, it has been filtered by a sock in the tank and a filter under the car. So why do fuel injectors still become clogged or have spray pattern problems? The answer involves a little bit of chemistry and a lot of heat.

Since the formation of these deposits is a normal consequence of engine operation, detergents are added to gasoline to help keep the injectors clean. But if a vehicle is used primarily for short-trip driving, the deposits may build up faster than the detergents can wash them away. On four-cylinder engines, the No. 2 and No. 3 injectors are in the hottest location and tend to clog up faster than the end injectors on cylinders No. 1 and No. 4. The same applies to the injectors in the middle cylinders in six- and eight-cylinder engines. The hotter the location, the more vulnerable the injector is to clogging from heat soak. Throttle body injectors are less vulnerable to heat soak because of their location high above the intake manifold plenum.

Heat soak can affect direct-injection injectors due to their placement in the head. Even with the higher pressures, the orifices can become clogged over time. Another effective test is to measure the pressure loss in the fuel rail when each injector is fired and pulses for a set period of time. Use an electronic injector pulse tester for this. As each injector is energized, a fuel pressure gauge is observed to monitor the drop in fuel pressure. The electrical connectors to the other injectors are removed, isolating the injector being tested. The difference between the maximum and minimum reading is the pressure drop.

Ideally, each injector should drop the same amount when opened. A variation of 1.5 to 2 psi or more is cause for concern. No pressure drop, or a very low-pressure drop, is a sign the orifice or tip is restricted. A higher than normal pressure drop indicates a rich condition that could be caused by a stuck plunger or worn pintle.

A lean misfire may trigger a misfire code and turn on the check engine light. The code often will be a P0300 random misfire code, or you may find one or more misfire codes for individual cylinders depending on which injectors are most affected.

In turbocharged engines, dirty injectors can have a dangerous leaning effect that may lead to engine-damaging detonation. When the engine is under boost and at a higher RPM, it needs all the fuel the injectors can deliver. If the injectors are dirty and can’t keep up with the engine’s demands, the fuel mixture will lean out, causing detonation to occur. The leaning out may cause higher than normal exhaust temperatures and turbo failure.