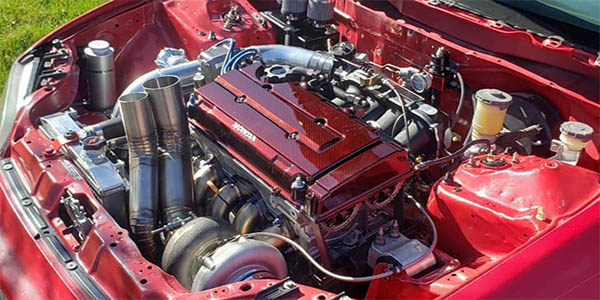 Most people don’t have the budget to buy a performance car and then dump another small fortune into modifying it for racing. A lot of people opt for buying entry-level, four-cylinder cars and then put money into making those vehicles race cars.

That’s Honda’s stronghold on the market and a few of its engines stand out when it comes to building performance vehicles – the B series engines and its K20 and K24 engines. Another notable engine newer to the market is the K20C1 engine found in Honda’s Civic Type R. We spoke with a few engine builders about these engines and why they have ruled the import crowd for so long.

Honda’s B series were a family of inline four-cylinder DOHC performance engines introduced by Honda in 1988. The B-series engines had the first application of Honda’s VTEC system (available in some models). They were made in 1.6L, 1.7 L, 1.8 L, and 2.0L variants. Later models have minor upgrades including modifications to the intake valves, ports and piston tops, along with individual cylinder oil injectors. They produce between 126 hp and 190 hp with some models capable of a redline over 8,500 rpm.

The Honda B16 has appeared in six different forms over the years. The Honda B series was replaced by the K series in Civic, Integra and CR-V applications.

“On the B series platform, there’s really not a whole lot of weak spots,” says Daniel Cahalan of 1320 DTR in Thornton, CO. “Usually the GSRs will hold 500 horsepower fairly regularly bone stock. But for the most part, if you’re going to rev it up anything over the OEM specs, a valvetrain upgrade is a must. Especially now that all those motors are 20-plus years old, all the spring tension is gone now. Instead of floating a valve, it’s best to get those replaced, no matter what.”

If customers do intend on pushing their engine beyond 500 horsepower, Cahalan recommends utilizing aftermarket sleeves or a Cylinder Support System (CSS).

They’re open deck blocks, so to strengthen those up and run the stock sleeves is fine – you can do the CSS and run over 1,000 horsepower,” he says. “They don’t guarantee that. They guarantee about 800 horsepower, which is pretty impressive from a stock sleeve.”

At JBR Engines in Tampa, FL, Jose says they opt for aftermarket sleeves in order to allow for high horsepower.

“To start, we sleeve blocks with ductile iron sleeves from either LA Sleeve or Darton,” Jose Bello says. “We also bore, hone, deck and o-ring the blocks for better seal, and CNC port the cylinder head.”

In addition to those upgrades, most Honda engine builders suggest replacing rods and pistons too. However, a stock crank can hold up, to a point.

“You’ll want to upgrade rods and pistons, but I’ve never had to upgrade a crank,” Cahalan says. “Those cranks are well over 1,000 horsepower.”

JBR Engines uses forged pistons, aluminum rods, upgraded cranks and performance valvetrain components to get their Honda B series engines drag race ready. In general, the B series engines are cheaper to build than the K series, even though they’re becoming harder to find.

“In stock form, B series engines can range from 500 horsepower to 1,300 horsepower if it’s a fully built motor. Above that is beyond normal. Most guys are anywhere from 900-1,300 horsepower pretty regularly with a turbo.”

First introduced in 2001, the Honda K-series engine is a four-cylinder, four-stroke engine that replaced the B series. The K-series engines are equipped with DOHC valvetrains and use roller rockers to reduce friction. The engines use a coil-on-plug, distributor-less ignition system with a coil for each spark plug. This system forgoes the use of a conventional distributor-based ignition timing system in favor of a computer-controlled system that allows the ECU to control ignition timing based on various sensor inputs. The cylinders have cast iron sleeves similar to the B series engines.

Two versions of the Honda VTEC system can be found on K-series engines, and both versions can come with variable timing control (VTC) on the intake cam. The VTEC system on engines like the K20A3 only operate on the intake cam – at low rpm only one intake valve is fully opened, the other opening just slightly to create a swirl effect in the combustion chamber for improved fuel atomization. At high rpm, both intake valves open fully to improve engine breathing. In engines such as the K20A2 found in the Acura RSX Type-S, the VTEC system operates on both the intake and exhaust valves, allowing both to benefit from multiple cam profiles.

“The Honda B and K-series engines are the two main platforms for performance,” Cahalan says. “As time goes on, it’s definitely starting to push more towards the K series. That’s just because the B series obviously aren’t in production anymore and they’re starting to become a little more scarce and harder to get ahold of.”

According to 1320 DTR, the K series engines are pretty solid overall. The upgrades needed for high horsepower with this platform are similar to the B series – rods and pistons.

“Their sleeves are a little thicker, so they’re a little stronger sleeve-wise,” he says. “The valvetrain also needs to be upgraded because some of the stuff is being pushed to 10,000-11,000 rpms. They were never designed to hold that stock, so upgrading the valvetrain is usually one of the first things you want to do.

“Streetwise, a lot of street guys usually shoot for 500 horsepower, which is super easy. Built up, they’re similar to the B series and guys are making anywhere from 900-1,400 hp. It seems like the street number that everybody wants to shoot for is that magical 500 hp.”

While both the B and K-series engines are great in a turbo application, the K series is the go-to if you’re considering an all-motor application. Either way, the K series has effectively taken over where the B series left off.

“The technology is there for the B series still and it’s been around for so much longer, but the K series is definitely charging hard right now,” Cahalan says. “It’s definitely going to replace all B series motors just like the B series replaced all the single cam stuff. The B series is going out the door eventually.”

One of those newer K series engines is the K20C1 seen in the new Civic Type R. According to Luke Wilson of 4 Piston Cylinder Heads in Danville, IN, there’s real potential behind this powerplant and they’ve been putting resources into its further development.

“We bought two of the Civic Type R cars to do work on the engines,” Wilson says. “Not many people have seen that engine taken apart, let alone built into something substantial.”

While the familiar “K” remains in this new engine’s name, these engines are not merely an evolution, but rather a completely new design.

“They’re pretty big engines from the factory – we’re bending rods at 400 horsepower, which is unlike Hondas in the past,” he says. “It’s neat and it’s new and no one has seen the stuff. This engine is a totally different approach. It’s a direct injection, turbo engine. It’s the Honda that we’re going to be working with for the next 20 years. That’s the reality.”

The K20C1 is a direct injected, turbocharged, 2.0L engine that produces 306 hp and 295 lb.-ft. of torque from the factory. This engine is not only being utilized in on-road Honda Civics, but also purpose-built racecars, including F4 and F3 feeder series for the climb to Indy Car, British Touring car, IMSA, and many other forms of endurance racing.

“What we are doing is making the engines stronger, and setting them up for higher output,” Wilson says. “The stock turbo can produce 400 lb.-ft. of torque at low rpm and over 400 hp.”

Two of the differences between the Civic Type R engine and Honda engines of the past are direct injection and a tumble port design in the cylinder head. This is where Wilson and 4 Piston Cylinder Heads specialize.

“Honda’s of the past 20 years have flown 300 cfm,” he says. “This thing flows 150-160 cfm, but it’s a tumble port design, so it’s got a big sharp point right before the valve – like the EcoBoost – to create tumble so they can get this efficient fuel burn in the chamber. However, that really kills flow. One thing Honda did differently is they gave this a big ass race port where the EcoBoost and some of these other engines are tiny, little ports going into a little sheer before the valve to tumble the air.

“For the cylinder head, we remove some of the tumble port design for fuel economy and to increase airflow by 140 cfm without drastically increasing the port volume. This brings the power in a couple hundred rpm sooner and allows for around 20 hp in gains on the stock turbo, but at lower boost pressure.

“We also relieve some of the back pressure with our exhaust port, which becomes important when upgrading to larger turbos that will exceed 600 hp. Exhaust Gas Temperature (EGT) can be pretty high in these the way they are being used in endurance racing, and that is something that we have to help teams to control to get the engines to last. We replace the valves with Ferrea Competition Plus Super Alloy valves to handle the extra exhaust heat, and use a higher pressure Pac spring and titanium retainer for rpm use over the factory head…which runs out of steam before 7,000 rpm.”

According to Wilson, the market interested in these engines is going to be really, really excited about 400 horsepower, but his team isn’t stopping there!

“We took the stock car and put a MoTeC ECU on it and we turned it up,” he says. “It was easy to add 120 horsepower without touching any part of the car, other than putting a computer in it and about 30 percent ethanol in it. It’ll also deliver well over 400 ft.-lbs. of torque. It’s pretty wild for a little engine, but they’re different.”

The K20C1 engine also has an offset crank in relation to the bore so that the piston is straight up and down when it’s on a power stroke.

“We replace a rather fragile OEM connecting rod with our Saenz I-beam rod that is rated at over 800 hp,” Wilson says. “It is also more than 100 grams lighter than the OEM rod. The pistons are replaced by JE forged pistons, which have a thicker top, thicker pin boss area and a tool steel wrist pin. We offer replacing the OEM sleeve with a ductile iron sleeve for larger bore size and use an o-ring for additional cylinder sealing. We’re designing the engine to be able to handle about 800 horsepower.”

No matter what series Honda engine you have your hands on, competent engine builders will be able to deliver big horsepower out of that small engine!