Ford Motor Co. and Toyota Motor Corp. – the world’s two leading manufacturers of hybrid vehicles – announced in August they will equally collaborate on the development of an advanced new hybrid system for light truck and SUV customers. 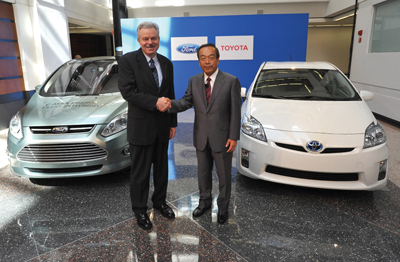 The two automakers signed a memorandum of understanding (MOU) on the product development collaboration, with the formal agreement expected by next year.

Both companies have been working independently on their own future-generation rear-wheel drive hybrid systems. The two now have committed to collaborate as equal partners on a hybrid system for light trucks and SUVs. This new hybrid powertrain will bring the full hybrid experience of greater fuel efficiency to a new group of truck and SUV customers without compromising the capability they require in their vehicles.

While both companies touted their hybrid accomplishments, Ford and Toyota believe that their collaboration will allow them to bring these hybrid technologies to customers sooner and more affordably than either company could have done alone.

Ford said it achieved a breakthrough with the Ford Fusion Hybrid, and is looking repeat their
success for a new group of truck and SUV buyers.

Toyota said it launched the first-generation Prius in 1997, the world’s first mass-produced gasoline-electric hybrid, and since then, the automaker has sold about 3.3 million hybrid vehicles.

Under the MOU agreement, the two companies will bring the best of their independently developed hybrid powertrain technology and knowledge to a new co-developed hybrid system, which will be used in rear-wheel-drive light trucks arriving later this decade.

The rear-wheel-drive hybrid system will be based on an all-new architecture to deliver the capability truck and SUV customers demand while providing greater fuel economy.

While the rear-wheel-drive hybrid system will share significant common technology and components, Ford and Toyota will individually integrate the system into their own vehicles. Each company also will determine the calibration and performance dynamics characteristics of their respective light pickups and SUVs.