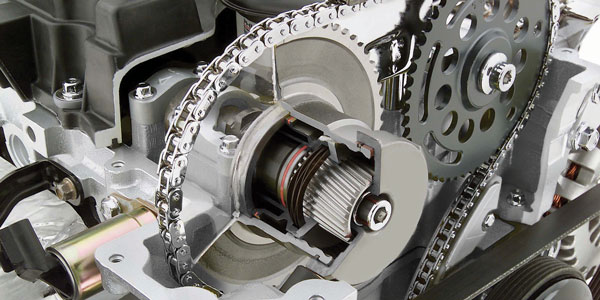 One of the ways automakers squeeze more horsepower and torque from an engine is adding variable valve timing (VVT) to the valvetrain.

One of the ways automakers squeeze more horsepower and torque from an engine is adding variable valve timing (VVT) to the valvetrain. A conventional camshaft has fixed valve lift, duration and timing, so the grind is always a compromise between fuel economy, performance and emissions. But with cam phasing VVT, duration, valve overlap and timing can be changed on the go to optimize engine performance at different RPMs, loads and operating conditions.

Cam phasing systems essentially rotate the camshaft fore or aft to advance or retard timing. This differs from other VVT systems such as Honda’s VTEC and Nissan’s VVL that are “cam changing” systems. In a cam changing VVT system, the position of the rocker arms changes when oil pressure is applied so the rockers will follow a different set of lobes on the cam for increased lift, duration and power.

Some applications also have the ability to continuously vary valve lift on the go, such as BMW’s Valvetronic, Nissan’s CVTC and VVEL and Toyota’s Valvematic. For this article, we’re limiting our discussion to applications that use some type of cam phasing to change valve timing.

Valve timing can be advanced at low RPMs for better throttle response and torque. Valve duration can be increased at higher engine speeds to improve breathing and power. Valve timing can also be retarded when the engine is under load to reduce NOx emissions (and eliminate the need for an EGR valve).

Most of the VVT systems you are likely to encounter are those with hydraulically actuated cam phasers, although a few (such as Lexus) use an electric actuator to advance or retard cam timing. The cam phaser changes camshaft and valve timing by rotating the relative position of the camshaft slightly fore or aft compared to its normal base timing setting. The phaser is part of the cam drive system and is mounted on the cam drive gear or sprocket.

There are several basic designs:

• Helical gear phasers. These are used on many of the older applications and are essentially “on” or “off” actuators. When oil pressure is applied to the gear mechanism inside the phaser, it forces the helical gear to move. This typically retards cam timing 20 to 30 degrees. A spring then returns the cam back to its normal position when oil pressure is relieved.

• Vane rotor phasers. They function pretty much the same as a lobed rotor phaser by offering incremental timing advance or retard as oil pressure is applied to the chambers on either side of the vanes. The phaser usually has five vanes that protrude outward from the rotor, with each vane being located within its own oil cavity.

Most VVT systems are not engaged when the engine is idling and remain in the locked or base timing setting. With hydraulically actuated cam phasers, the VVT system is also usually not active until the engine reaches normal operating temperature. As engine speed and/or load change, the PCM looks at its various sensor inputs and commands the oil flow control valve solenoids to open. They are located near the phasers on the timing cover or valve covers.

As simple as it all sounds, any number of things may set a VVT-related fault code:

• Electrical problems with the cam position (CMP) sensor. The PCM has to receive an accurate cam position signal to monitor the operation of the VVT system. If the sensor has failed or is not reading accurately, it can set a camshaft position error fault code.

Cam position sensors may be magnetic or of the Hall effect variety. You can check the resistance of a magnetic sensor by back-probing with an ohmmeter (usually 500 to 900 ohms). A magnetic sensor should also produce an AC output of at least 20 mV at idle, which you can see on a scope or a scan tool that can graph voltage signals.

Hall effect sensors produce a digital signal that you can check on a scope or a scan tool that can display sensor data. The output should be an on-off square waveform. If the vehicle also provides a cam position PID and your scan tool can read it, check the value to see if it makes sense and changes with RPM and/or load.

• Electrical problems with the voltage supply, ground connection or wiring harness to the oil flow control solenoid(s). If a solenoid fails to open and close when commanded to do so, it will prevent oil pressure from reaching the cam phaser. This will also set a camshaft position error fault code.

• Low oil pressure due to a low oil level in the crankcase, worn oil pump, worn main bearings or worn cam bearings. Hydraulically actuated cam phasers require good oil pressure to change their position. If they don’t get it, cam timing won’t change. Check the oil level in the crankcase, and, if it is low, add oil and check for oil leaks. If adding oil doesn’t remedy the situation, the phasers may not be receiving adequate oil pressure due to the other conditions just mentioned.

Connect an oil pressure gauge to the oil sending unit port and see if oil pressure is within specs. If it isn’t, the engine has internal problems that will need to be corrected. Sometimes, replacing the stock oil pump with a high-volume oil pump will correct a VVT cam phaser issue if the problem is insufficient oil flow to the cam and upper valvetrain.

• Using the wrong viscosity motor oil. Most late-model engines specify low-viscosity oils such as 5W-20 or 0W-20. Using a heavier, multi-viscosity oil such as 10W-30 may slow down the response of the cam phaser and set a fault code.

• Not changing the oil often enough may allow sludge to build up inside the phasers. This may make the phasers slow to respond to timing change commands or to even stick in a fixed position.

• Using the wrong oil viscosity in the engine may also make the cam phasers slow to respond, causing a camshaft position fault code to be set.

Think of a lobed- or vane-style cam phaser as a backward-operating gerotor-style oil pump. A gerotor oil pump produces oil pressure as the pump rotates. By comparison, a cam phaser rotates when oil pressure is applied to the rotor. Because of this, the clearances between the housing and rotor have to be fairly tight; otherwise, a loss of internal pressure will adversely affect the operation of the unit.

With lobed rotor and vane-style cam phasers, wear in the phaser housing, vanes or lobes reduces the unit’s ability to hold pressure and function normally. The dowel pin that holds the rotor in its neutral position may also become worn or shear off. The hole that the pin fits into may also become elongated or worn, preventing it from holding base timing. This can make the phaser noisy at idle, as well as cause erratic valve timing.

Cam phasers are expensive units to replace, costing anywhere from $100 to nearly $300 each depending on the application. Various aftermarket suppliers have replacement cam phasers in their product lines, which now include many popular import applications, such as Audi, BMW, Honda, Lexus, Mazda, Mercedes, Mitsubishi, Nissan, Porsche, Toyota, Volkswagen and Volvo.

Although some techs have tried rebuilding worn or damaged cam phasers, the OEMs treat them as a sealed unit, so no internal replacement parts or repair kits are available. Consequently, if you discover a bad cam phaser on a customer’s vehicle, you have to replace it.

On high-mileage engines, replacing the timing chain(s) and guides/tensioners is also recommended if you are replacing a bad cam phaser.

Note: If the upper valvetrain on the engine has a buildup of sludge, the engine should be flushed and the oil changed before the vehicle is returned to the customer. Use the recommended oil viscosity because using oil that is too thick may prevent the cam phasers from reacting quickly enough when commanded to change timing. This could cause a CEL and a VVT-related code to be set. Also, stress the importance of regular oil changes to your customers. Clean oil is essential for smooth operation of the VVT system on any engine.

Several import vehicles have had problems with their variable valve timing systems. These include:

• BMW had to recall about 156,000 cars including 2010-’12 model year 1 Series, 3 Series, 5 Series, X3, X5 , X6 and Z4 vehicles for a possible issue with the camshaft gear bolts that attach the variable valve timing VANOS cam phaser housing to the intake and exhaust cams. The bolts may work loose or break, causing the Check Engine light to come on, a sudden loss of power, engine noise, stalling and/or engine damage. If the original bolts are loose or broken, BMW recommends replacing the VANOS cam phaser unit and installing new bolts. The recall campaign number is 14V-176, issued October 2014 for N51, N52K and N52T engines. New bolts should be tightened to 9 Nm, then angle torqued 60 degrees.

• Mazda’s 2007-’10 CX-7 2.3L turbo, 2007-’10 Mazdaspeed3 and 2006-’07 Mazdaspeed6 have had some problems with loud ticking noises coming from the engine’s VVT system upon initial startup. The noise is caused by the cam phaser lock pin not being able to fully engage. Mazda TSB 01-012/12 issued April 3, 2012 says the loud ticking noise can also be due to a stretched timing chain. They recommend inspecting the timing chain and cam phaser to determine which is causing the noise since either one could be the cause. If the engine is noisy only on initial startup then quiets down, the cause is the cam phaser. If the engine continues to make noise from the timing cover area after it has warmed up, the cause is likely a stretched timing chain.

Video: VIDEO: When Should You Change The Cabin Air Filter?

Career: Winners Announced For May ‘Guess The Tool’ Contest