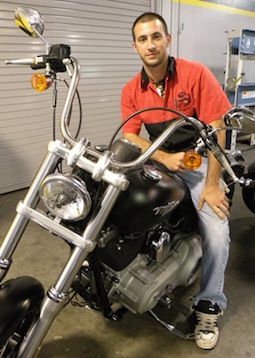 Ormond Beach, FL — James Turgeon, a graduate from the Motorcycle Technology (Domestic and European Specialties) program at WyoTech – Daytona, was selected as the winner of the school’s 2011 Dream Award.

The award recognizes a graduate who has completed a post-secondary education while overcoming extraordinary challenges.

Having worked in the automotive industry for years, it was no surprise when Turgeon enrolled at WyoTech – Daytona to pursue his dream of a career in motorcycle mechanics.  Before entering the program at WyoTech, Turgeon worked as a diesel mechanic for Ford but was laid off in the economic downturn.

After being unemployed for a year and no job prospects on the horizon, he decided to take a risk and leave his hometown to learn about what he loves most, motorcycles.

While at WyoTech not only was Turgeon an Eagle Tech, which means he was in the top five of his class and maintained perfect attendance, but he also was on the Honor Roll, and was a member of the National Technical Honors Society.

“Turgeon is the perfect candidate for the Dream Award. He excelled in the classroom and he also tutored and mentored his classmates as well as a special needs student,” said Jorge Gutierrez, president of WyoTech’s Daytona campus.

“We congratulate him and wish him continued success in the future.”

A month before graduating he accepted his dream job as a technician at Superchips, an aftermarket manufacturer in central Florida.

He is assisting in the design and testing of chips for Harley-Davidson motorcycles. Turgeon aspires to return to school in the near future to earn a Mechanical Engineering degree. As a Dream Award winner, he will receive a $2,500 scholarship to pursue advanced programs in his field of study.