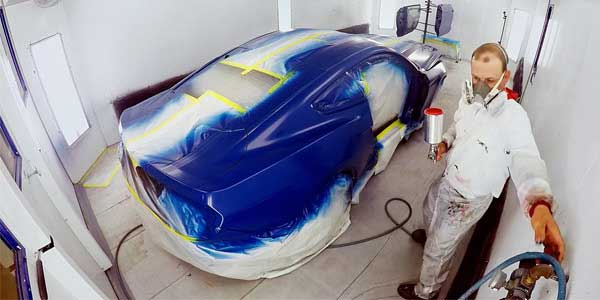 The 1,000 horsepower custom-built Ford Mustang from Petty’s Garage will be awarded at AAPEX 2017 as part of the MAHLE “Drive with the Original” promotion.

The MAHLE “Mustang Build” YouTube video series continues with a fourth installment highlighting the car’s custom paint scheme, as well as several enhancements to the interior of the vehicle. The 1,000 horsepower custom-built Ford Mustang from Petty’s Garage will be awarded at AAPEX 2017 as part of the MAHLE “Drive with the Original” promotion.

The video is available at the MAHLE Aftermarket YouTube Channel.

In this next documentary video, the Petty’s Garage team gives the MAHLE Ford Mustang a complete paint job featuring a custom-formulated blue color representative of MAHLE’s corporate color. The car was fully disassembled and the special blue paint was applied to several unique areas and parts of the vehicle, including the door jambs, the engine bay and the brake calipers. The interior of the car was upgraded with Ford Recaro seats wrapped in special leather with MAHLE blue stitching and custom embroidery on the seat-backs.

The final installment in the MAHLE “Mustang Build” video series will premiere toward the end of this month just ahead of the conclusion of the “Drive With the Original” promotion on Oct. 1. The video will feature highlights of the MAHLE Mustang on the dyno when it reaches 1,000 horsepower, as well as a special appearance by “The King” himself, Richard Petty.

The grand-prize MAHLE Ford Mustang will be awarded on Oct. 31 at AAPEX 2017 in Las Vegas. Four finalists will be randomly selected from all entries to receive an all-expenses-paid trip to Las Vegas to participate in the special grand prize ceremony. Petty will be present when the finalists each select a key fob ­– one of which will unlock the doors of the customized, twin-turbo 1,000 HP Grand Prize MAHLE Ford Mustang from Petty’s Garage.

Complete information about the “Drive with the Original” promotion, including official rules, terms and conditions, can be found at drivewiththeoriginal.com. Information to participate in the promotion also is available on specially marked MAHLE Original gasket boxes.

For more information about MAHLE Aftermarket and its brands, visit mahle-aftermarket.com or contact a local sales representative.