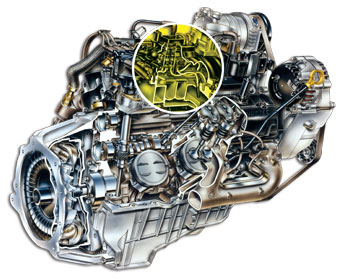 Though the CPI system supplies fuel to each of the engine’s intake ports like other multi-port fuel injection systems, it has only one centrally located fuel injector, called the MAXI injector. Some bean counter at GM probably came up with the idea as a way to reduce costs. Fuel injectors are expensive, so using one injector instead of six seemed like a good idea at the time.

Here’s how it works:
The MAXI injector is mounted in the center of the intake manifold on the 4.3L engine, and is hidden inside the split plenum manifold.Instead of spraying fuel directly into the manifold like a throttle-body injector, the MAXI injector routes fuel into six nylon fuel lines that have poppet-style spray nozzles on the end. When the pressure inside the lines reaches the opening pressure of the poppet valves (43 psi), fuel sprays out of the nozzles into the engine’s intake ports.

In the first generation CPI system, all the nozzles spray simultaneously when the MAXI injector opens (three times per crankshaft revolution). In the second generation CSFI system, the injectors are controlled individually and fire only once every other revolution of the crankshaft. This allows the system to provide sequential fuel injection for better emissions, performance and fuel economy. 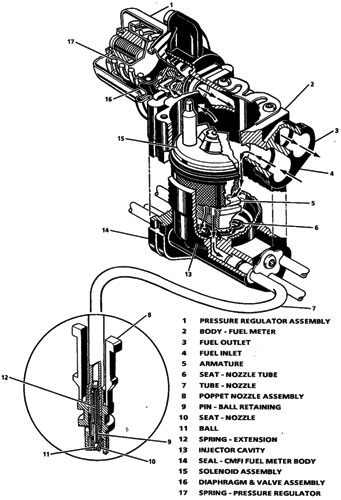 The CPI system is a speed-density system, so there is no airflow sensor. The powertrain control module (PCM) estimates air flow using inputs from the MAP sensor, throttle position sensor, temperature sensor and engine speed. Fuel delivery is controlled by pulse width modulation. The PCM varies the on-time or dwell of the MAXI injector to control the air/fuel mixture. The injector driver circuit uses the peak-and-hold method, providing 4 amps to open the injector and about 1 amp to keep it open.

Some Assembly Required
The important point to note about the CPI system is that if anything in the CPI system fails (the MAXI injector shorts out, goes open or leaks, the fuel pressure regulator leaks, any of the lines that connect the MAXI injector to the nozzles leak or break, or any of the individual nozzles leak or become plugged up), the whole system must be replaced as a complete assembly.

Warning: If the engine compartment smells like gasoline, remove the manifold tuning valve located on top of the intake manifold and look inside with a flashlight. If the inside of the manifold is shiny or you can see fuel stains or leaks, the CPI is leaking and needs to be replaced without delay.

To replace the CPI assembly, the top of the intake manifold plenum has to come off. There are 10 Torx fasteners that hold it in place. Once that is out of the way, the six individual spray nozzles can be pulled out of the bottom half of the manifold by squeezing the plastic prongs together and pulling (sort of like pulling apart an electrical connector).

Caution: When installing the CPI system, make sure the poppet nozzles are securely locked in position in the lower half of the intake manifold. If one comes loose, it can spray fuel where fuel doesn’t belong and create a potential fire hazard.

Second-Generation CSFI
On the second-generation Central Sequential Fuel Injection (CSFI) system (1996 and up), the MAXI injector in the central housing has been replaced with six individual injectors, each of which feeds fuel to its own poppet spray nozzle. The system also uses a mass airflow sensor to monitor airflow.

Fuel pressure in the CSFI system is a bit higher than the CPI system (60 to 66 psi with key on engine off), and the regulator maintains the operating pressure at 55 to 57 psi. The poppet valves in the spray nozzles also open at a slightly lower pressure (about 40 psi). The injectors fire just before each intake valve opens.

In recent years, an aftermarket replacement system for these applications has been developed that converts the CSFI system into a conventional multi-point fuel injection system. The aftermarket system looks similar, but the troublesome poppet valve spray nozzles on the ends of the fuel distribution lines have been replaced with conventional electronic mini-injectors. 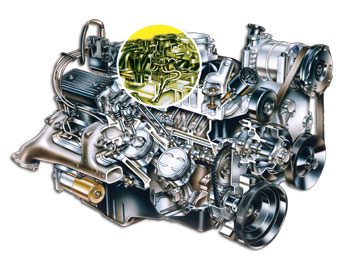 Leaky System
Common problems on the first generation CPI system include fuel leaks at the pressure regulator (which can leak fuel onto the passenger side of the intake manifold and create a potential fire hazard), fuel leaks in the fuel supply and return lines (which tend to leak fuel onto the driver’s side of the intake manifold), leaks or electrical faults in the MAXI injector, leaks in the fuel lines between the MAXI injector and the spray nozzles, and gummed up poppet valves.

If one poppet nozzle leaks, it will cause a drop in pressure to the other poppet nozzles, too. The cylinder with the leaking nozzle will run rich and may have a wet fouled spark plug. The others will likely run lean and may misfire.

Common problems on the second generation CSFI system include leaky O-ring seals, leaky fuel pressure regulator, leaks in the fuel pulsator or damper inside the fuel tank (causes a loss of fuel pressure), and leaky or gummed-up spray nozzles.

General Motors has issued several technical service bulletins that deal with these issues, including:
• TSB 99-06-01-022 that covers procedures for cleaning CPI poppet valve spray nozzles; • TSB 00-06-04-003B for cleaning CSFI poppet valve spray nozzles;
• TSB 56-63-06;
• TSB 66-63-09 that cover diagnosing hard-starting/no-start problems with the CPI system; and,
• Special Policy 99034A that extends the factory warranty on California-only CPI systems (RPO L35 VIN Code W) to 10 years or 100,000 miles.
(The latter blames CPI problems on the use of California’s reformulated gasoline, and covers both repairs and cleaning.)
• GM also issued a recall (99066F) on 1996 to 2003 CSFI systems, and extended the warranty to 10 years or 200,000 miles (whichever comes first) to cover problems with the poppet spray nozzles. The recall covers free injector cleaning and/or replacement as needed to correct driveability or emissions problems. 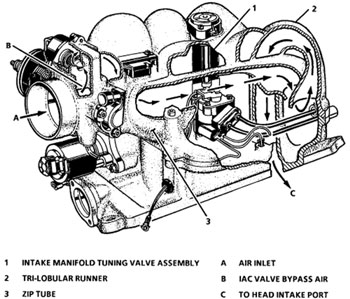 Fuel Pressure Problems
The CPI and CSFI systems are both very sensitive to any loss of fuel pressure. If the fuel pump is weak, is not getting enough voltage to run at normal speed, or the fuel supply line is restricted because of a clogged fuel filter, a drop of only a few psi can be enough to create a hard-start or no-start condition.

The first step in diagnosing a hard start or no start on a GMC or Chevy truck with one of these systems, therefore, would be to check fuel pressure. If fuel pressure is less than the KOEO specification, you need to test the fuel pump and its voltage supply circuit.

Dead head pressure from the fuel pump should be 70 to 80 psi or higher, and the pump
should be capable of delivering a quart of fuel in 30 seconds. If the pump is not delivering the required pressure or volume, check the pump’s voltage and ground connections.

You should see battery voltage at the pump when the key is on, with no more than a 1.5 voltage drop for the total circuit (ideally less than 0.5 volts). No voltage at the pump could be due to a blown fuse, an open in the pump circuit wiring or a bad fuel pump relay. If the relay isn’t closing, check the oil pressure switch. Power to the relay is routed through the oil pressure switch to kill the pump if the engine is not running (a safety measure to cut off the fuel in an accident).

Sometimes the pump wires inside the tank can also overload and short out. The wires are a small gauge and were not designed to handle high amp loads (as can occur when a worn pump starts to pull more than its normal current). That’s why some aftermarket replacement fuel pumps now include a new tank wiring harness for these trouble-prone applications.

If an injector or poppet nozzle on a CSFI system is bad and you have to replace it, make sure the poppet nozzle is securely locked in position in the lower half of the intake manifold.

Intake Tuning
A couple of other things to mention about an older CPI system is that it uses an Intake Manifold Tuning Valve (IMTV) to open up the intake manifold plenum when engine rpm is above 3,000 rpm and the throttle position is above 36%. The boost in breathing helps the engine develop more horsepower. The tuning valve was discontinued on the second generation CSFI system (another cost-cutting measure, no doubt).

There is no specific diagnostic trouble code for the IMTV circuit on pre-1996 trucks, and a scan tool only shows the control valve on/off status. But if the system is not working, the engine will not develop its normal power above 3,000 rpm.

Another feature that appeared on the early 4.3L Vortec engines was a “linear” exhaust gas recirculation valve. The valve does not use vacuum to open the EGR valve, but instead uses a solenoid controlled by the PCM. The PCM varies the duty cycle of the solenoid to vary EGR flow as needed. A problem here may cause spark knock (detonation) if the EGR valve fails to open or becomes clogged with carbon, or misfiring or rough idle if the EGR valve fails to close.

Did You Know
In ways, the CSFI system functions sort of like an old-fashioned diesel injection system except that there is no mechanical fuel pump, fuel injection is controlled electronically, and the operating pressures are much lower. Fuel pressure in the CPI system with the key on and engine off (KOEO) should be about 58 to 62 psi. Some specs say 54 to 60 psi is OK, but some fuel injection experts insist that to start and run properly, most CPI systems really need at least 58 psi. Pressure is generated by a tank-mounted electric fuel pump. A fuel pressure regulator on top of the MAXI injector maintains operating pressure at about 55 to 57 psi when the engine is running.

Did You Know
On the CSFI systems, a dirty or defective mass airflow sensor can also cause problems (typically lean codes, hesitation, misfiring or rough idle). The airflow sensor can be checked with a scan tool, and should read about 5 to 7 grams/second airflow at idle on a warm engine. If the sensor is reading low, it can be cleaned by spraying the sensor element with electronics cleaner (do not use any other type of cleaner or solvent as this can damage the sensor). If it is still misbehaving after cleaning, replacement is your only option.