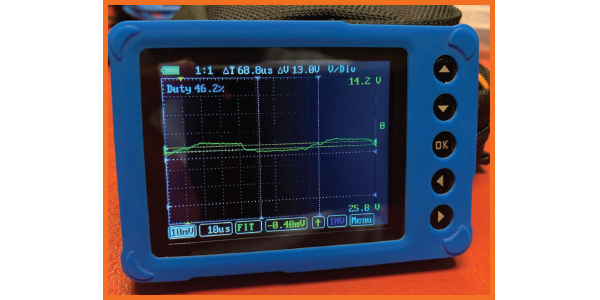 Even for a lot of great technicians, an oscilloscope, lab scope or just “scope” can an intimidating piece of equipment.

Even for a lot of great technicians, an oscilloscope, lab scope or just “scope” can an intimidating piece of equipment. They know it can help to solve some diagnostic dilemmas and change them from a “parts swapper” to a real diagnostician – but sometimes it feels that every time it’s pulled from the toolbox, it is an unproductive exercise and they might be better off just ordering a part and taking a gamble.

All technicians know more complex cars with more expensive modules and sensors are coming to shops, so parts swapping is not usually an option. And bumbling around with a tool that you do not understand while working on flat rate can leave you working for free. That’s why getting past “scope phobia” can help you make a better living and unlock your potential.

I am going to set my ego aside and tell you about my journey of becoming a technician who feels comfortable with using a scope.

Early in my journey, I read magazine articles and took a lot of courses in which trainers evangelized on the power of their scope. It felt like they were using magic when they were able to spot a burnt valve or worn spark plug by just looking at a small section of a waveform. When I tried, I had issues getting the waveform to show up on the screen, or it would look nothing like their waveform. It was frustrating.

The revelation for me was not to focus on the scope, but the circuit. If you don’t understand ignition, fuel injection or sensor circuits, you can’t effectively use a scope for diagnostics. For me, it was getting a better understanding of ignition primary and secondary windings or how pulse-width modulated voltage controls the speed of a motor. Understanding how sensors turn movement, temperature and current flow into signals that a computer can understand made setup and interpretation easier.

As I began to understand the circuits and components better, it started to click. Waveforms were more natural to capture, and I could set up scales and triggers faster.

DC and even AC power on a vehicle can actuate an electric motor, power a sensor and communicate information. Every signal has a voltage range and method of operation that controls what the voltages will look like over a specific period.

The most frustrating thing for most inexperienced scope users is losing the waveform on the screen after adjusting a scale or triggers. Don’t panic – the waveform is still there, it may just take a little patience to get it back. It is never a mistake, just another learning experience

So, you have waveform – now what can you do with it? If you know the circuit, you can make a call just by looking at the screen.

Very few OEMs will include a waveform as part of the service information but comparing waveforms from a suspect component to a known good one is a critical strategy when performing diagnostics. This can be done by comparing ignition coils or another wheel speed sensor. But, if it is the only component of its kind on a vehicle, it can be difficult on your own. A scope is only as good as its library of known-good waveforms.  There are many websites where you can share waveforms with other technicians. Also, some PC based scopes include a library of waveforms for comparison. With useful information, you can interpret if a little squiggle is normal or signs of a problem.

A scope is limited to measuring voltage and time, but probes and other add-ons can show current flow, pressure and even the presence of radio signals.

The most crucial probe is an amp clamp or current probe. A current clamp is placed over a wire to measure the flow of power through a wire. Current measures the load or the amount of work a circuit is performing. Yes, you can use an amp clamp with a multimeter, but a scope can add an extra dimension of time. The most basic test you can perform with an amp clamp is relative compression. Measuring and graphing the number of amps used by the starter to rotate the engine will allow you to see the compression of the individual cylinders. If you have a two-channel scope, you could use the second channel as a trigger to indicate which cylinder is near the top of the compression stroke. This type of compression check can be performed without removing the spark plugs.

Other add-ons can measure pressure on a scope. With a pressure transducer, you can connect and measure fuel, in-cylinder and crankcase pressures. The advantage of using a scope is the ability to look at the readings over a time period and not just the movement of a needle on a gauge. With in-cylinder pressure testing, you can see the opening and closing of the valves and if they are sealing. For fuel pressure, it is easy to spot glitches or sudden loss of fuel pressure.

Like all tools, a scope has its limits. For some jobs like secondary ignition waveforms, it is a killer tool for finding misfires at idle and possible in-cylinder conditions, but you might be better off looking at the misfire counter on a scan tool to diagnosis a complaint that occurs under partial or full throttle.

Most scopes designed for automotive use are classified as digital storage oscilloscopes. These types of scopes can save frames of a waveform for analysis. The amount of data collected is determined by the sample rate, available memory and the number of channels being monitored.

Currently, I have four scopes in my arsenal. Two of my scopes are PC/scan tool units that connect with a USB cable. These scopes are fast and can capture a lot of information. Also, the software has pre-programmed probes for pressure transducers and current clamps. These can also allow me to build custom probes for DIY pressure transducers. One scope’s software has presets for different tests. The presets adjust the voltage and time scales along with the trigger levels.

My other two scopes are stand-alone DSO scopes. My first scope was a hand me down from my father. This “scope meter” has a small monochromatic LCD screen. This 25-year-old two-channel unit can capture a waveform very quickly when put into automatic mode. But, the scope is limited to the resolution of the primitive LCD screen and limited memory.

The other scope is my least expensive scope. This single-channel pocket scope was less than $150, but it is the fastest scope in my toolbox. When I say fastest, I am referring to how fast it is at capturing a waveform. I consider this my triage scope that can be used to capture primary and secondary ignition waveforms or a pulse-width modulated signal to a fuel pump. But, I would probably never use it for a relative compression test due to the limited bandwidth and sample rate.

Can you make money with a scope? A scope will never make money on its own, but it is a tool that can help you make a definitive diagnosis faster with less disassembly. It is just one tool in a diagnostic tool package that might include a scan tool, old fashioned visual inspection and constant training.

Unlike a wrench or screwdriver, a scope becomes more productive the more you use it. If you use it only as a tool of last resort then you will struggle every time.

Advertisement
In this article:AVI, scan tool

Making A Living With A Scope