Manufacturing Industry Needs Young Skilled Workers
Who would imagine that metalworking, robotics and welding would replace swimming and sports as major activities for a number of youngsters who attend summer camps? Yet, such programs are starting to flourish, introducing young people to the joys of making things and underscoring the opportunities in manufacturing.

The young students who attend these camps learn, for example, to create a three-dimensional design on a computer, transfer the design to a computer numeric control (CNC) machine, take the finished product home after being built, and tour local companies to learn about careers in manufacturing.

This burgeoning camp movement is an important stepping stone to help avert a growing crisis in America – too few young people are developing the kind of hands-on, high-tech skills required by industries, workshops and engineering practices. Concurrently, today‟s employers face a shortage of skilled workers that gets more urgent each year.

One organization seeking to spark youth interest in the trades — Nuts, Bolts & Thingamajigs (NBT), The Foundation of the Fabricators & Manufacturers Association, Intl. (FMA) — provides grants to nonprofit organizations and educational institutions that offer overnight or day camps to introduce young people to careers in manufacturing and engineering.

This year NBT awarded 19 grants ranging from $2,500 to $5,000 to organizations offering summer manufacturing camp experiences for kids ages 12 to 16.

A New Camp Experience
“Summer manufacturing camps, like those supported by NBT, provide a positive, hands-on experience so young people will consider manufacturing as a career option,” said Gerald Shankel, president and CEO of the FMA.

“They target youth at the critical level of secondary education, exposing them to math, science and engineering principles, and give them opportunities to see the technology being used in industry and the high level of skills that will be required from the workforce.”

Actor, director and producer John Ratzenberger, a NBT founder, has made surprise appearances at the camps to champion the students’ efforts.

“If we‟re to continue to be the greatest manufacturing nation in the world, it‟s vital that we inspire the next generation of engineers, builders and manufacturers,” said Ratzenberger.

“And it all starts with a ‘tinkerer’  – a child that loves to take things apart and put them back together; who wants to know how things work. These camps introduce kids to vocational and technical training while giving them hands-on-experience that builds their confidence, skills set and foundation for a successful future.” 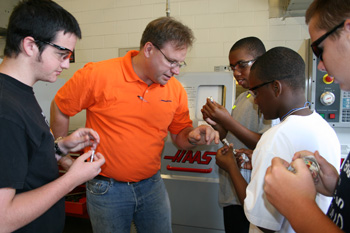 The week-long camps begin with an exploration of science and engineering principles. Students are introduced to CAD software and use it to design a project. They build their projects utilizing available technologies such as welding, braking, CNC lathe, waterjet and sometimes advanced laser technology – and take their projects home with them as lasting reminders of their new skills. The final days of the camp are reserved for visiting local manufacturing companies to see what types of career opportunities are available.

Camps Across the Country
NBT offers grants for manufacturing summer camps at numerous locations across the country – each aimed at changing the image of manufacturing for youth. Through partnerships with nonprofit organizations, such as the Boys & Girls Clubs of America, NBT provides guidelines on the basic structure of how a camp should be conducted. The organizations then use their community resources to develop the camps based on local manufacturing needs.

“We‟re making an investment in the workforce of tomorrow,” said Terrence Egan, NBT director. “We need to increase the pool of available, highly skilled workers to achieve a manufacturing renaissance and improve our economy.”

Tinkering Testimonials
The summer manufacturing camps often leave an indelible mark on the young students who attend them. Mary Mobijohn, a parent of a summer manufacturing camp attendee at Girls Get S.M.A.R.T. (Summer Manufacturing and Robotics Training) at Ulster Boces Career & Technical Education Center, Port Ewen, N.Y., told the organization, “I just wanted to thank you for another great year that my daughter had at your camp." 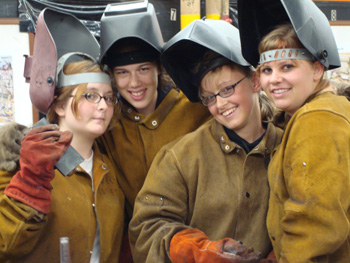 "She loved working with all the tools and machines to create different projects. I‟m a single mom and this camp is not only good for my daughter’s mechanical/engineering abilities, but it’s also helpful toward my finances, since it’s free.”

Rebecca Johnson, a faculty member of Griffin Technical College‟s “Are You Techin’?” Manufacturing Camp in Griffin, Ga., reported how one student – who initially said he probably wouldn‟t go to college and wasn‟t sure what he wanted to do for a living – experienced an eye-opening moment. “When he won first prize for soldering electronic components on his radio-controlled race car, his attitude changed and his self-confidence grew,” said Johnson.

“The first day of camp a student’s mom approached me so thankful for this opportunity for her son,” said Fabian. “She told me how much her son loved the camp and how he came home telling his family all about each day. She talked about how he shared new words he’d learned and processes he‟d been taught. She also mentioned that his older brother has now shown interest in attending our college in a technical field, based on his younger brother’s enthusiasm.”

Evelyn Torres, a career pathways coordinator for the Girls Get S.M.A.R.T. Camp in Port Ewen, N.Y., said, “Girls need to be aware that there are other types of occupations for them. The most rewarding part is they come in as shy young ladies and walk away with confidence. By the end of the week, they are not afraid of using heavy machinery and know they are as capable as any young man. Give them the chance, the tools and instructions, and they are capable of doing this work.”

Students often report positive impressions of their camp experience. Kayla Wenos, a seventh grader at Nativity Catholic school in Rhinelander, Wis., signed up for a camp because her uncle is a welder and she wanted to know more about what he does.

“The camp was busy and packed with fun, and the best part was the hands-on welding,” said Wenos to her local community newspaper. “It would be cool as a job.”

Paul Rickman, also from Nativity, said in the same news story, “I wanted to learn how to weld. Maybe this could be a job in the future. There were lots of trips and we learned a lot.”

Angela Bumgarner, who attended the M.E. 2 (Manufacturing Exploration and Experience) Camp at Indian Capital Technology Center in Phoenix, talked about her experience learning mecatronics, a high-tech combination of electronics, computer engineering and mechanics.

“I never thought making a robot would be so much fun until now,” said Bumgarner to her local paper.

Attending a summer manufacturing camp can have a positive effect on a child who likes working with their hands and is interested in technology and math. Parents and educators should recognize the availability of such programs and consider introducing their children and students to these fun learning experiences while at the same time battling negative stereotypes about manufacturing.

Egan believes one key to attracting kids to the high-growth jobs in the trade arena is talking to them about how they can learn to operate the most advanced technology in the world. “Let’s get kids off the gaming consoles and show them they can cut steel with laser lights, specialize in plasma cutting, weld with lasers, and operate robotics,” he said.

More information on NBT is available by visiting www.NutsAndBoltsFoundation.org.