In 2016, Quaker State brought back their successful “Best in Class Challenge,” where high school automotive students across the country compete to restore and customize a pre-owned Ford Mustang. Out of the five schools competing, Columbus, Georgia-based Jordan Vocational High School took top honors with their 1996 Mustang.

As the winner, the team of 10 students – known as Team Red Jackets – travelled to West Palm Beach to auction off the car at Barrett-Jackson and take home the earnings to benefit their auto program. The car sold for $50,000, but would end up earning the school $135,000.

“We sold it for $50,000, and then the gentleman that bought it actually donated it back to us, and had us sell it again at Connecticut Mohegan Sun Barrett-Jackson show,” says Robert Harris, director of Jordan Vocational High School’s auto program and Team Red Jackets coach.  “And there, that gentleman also bought it for $65,000 and he gave it back and had us sell it again…. We had to go to Arizona to do it and we got $20,000 in Arizona.

“It’s pretty amazing. I think [the students] are all excited about it too. They didn’t want to let the car go. At some point that was going to happen,” Harris adds.

Up for the Challenge

Before the craziness of the Barrett-Jackson auctions, the students were just trying to win the 2016 Quaker State “Best in Class Challenge.” After rigorous online voting took place for 57 schools in large metropolitan areas, Jordan Vocational was voted into the final five.

“Of course we were given the oldest vehicle of all the schools,” Harris says. “We had the ‘96 model and everybody else had a 2001 and up. So we were kind of fighting from behind in the start. I guess that gave us motivation.”

The students had six weeks to complete the rebuild and took the car completely apart. The interior, exterior, engine, transmission —everything had to come out and be rebuilt.

“We basically repainted the whole car as we were doing a full restoration,” Harris notes. “We sealed everything, polished and painted everything — interior, exterior. I think the kids learned so much that they probably had a little overload going on.”

The car was finished in five and a half weeks after a lot of days, nights and weekends of hard work. During the judging phase, details from presentation in cabin detailing to exterior were looked at by big-time industry names, including Tommy Pike, owner of Tommy Pike Customs; Mike Spagnola, vice president of OEM & Product Development for programs for SEMA; and The Fast and the Furious actor Sung Kang.

In November 2016, Jordan Vocational learned they had won the Quaker State “Best in Class Challenge,” but that was just the beginning.

“It felt wonderful because I know how much work we put in and I know the students know how much work that they put in on that car to try to make sure that they were doing their best,” says Harris. “For it to come to pass that we actually won the competition, it actually, to me, gave them some relevancy to why they were working so hard and made them understand hard work pays off not just now, but forever in their lives.”

The early and continued recognition helped the students realize just how much winning the challenge helped their future.

“We were the guys in the green shirts and people wanted to know who we are and what we did,” says Dante Lummus, a Jordan Vocational senior. “And then even completing overall the first time, that was enough for me and that really was one of my biggest accomplishments in my own life.”

As the only female on the team, 2017 Jordan Vocational graduate Breanna Price was often put on the spot wherever the team went, but the experience proved to be a testament to her success.

“Honestly I felt pretty good,” Price says. “Being the only girl, I get the look and I think I’m pretty famous for this…people would be like I know you, I’ve seen you on TV, I saw you on Barrett-Jackson, in the newspaper…. It opened up a lot of job opportunities.”

From Teammates to Family

Over the course of two years, Coach Harris and team worked together and travelled together as the winners of the challenge. Bringing together students of all different backgrounds and walks of life, one coach, one freshman, one sophomore, five juniors and three seniors became a family.

“It just became a brotherhood and they learned to love each other and work with each other,” Harris says. “They all learned to collaborate and work together to get to a common goal, which was to get this car done.”

“What these three trips have taught most of all is there is more to life than just a car,” adds Joseph Craigen, a Jordan Vocational senior. “We were given a car and the objective was to put a car together. But, in all actuality, this project brought us closer than just bearings and brakes. You know as Coach Harris stated earlier, we came together as what he called a ‘brotherhood’ and a lot of us on this team didn’t really know each other at the beginning or we didn’t know each other that much.

“And by the end of it we knew the ins and outs of each other pretty well. I can describe anybody on this team just as well as you’d probably be able to describe the back of your hand. And you know what this trip has also taught is how to take in the little things in life because not everybody is able to enjoy a trip to Scottsdale or a trip to Mohegan Sun all the way up in Connecticut.”

The trips to Barrett-Jackson were some students’ first times traveling to these locations and even on a plane – making the extra work and fundraising to get to the new auctions that much sweeter.

“This challenge has shaped and formed these guys in so many ways,” says Harris. “And they don’t realize how many other people this competition has touched and moved them in ways that are just unbelievable.” 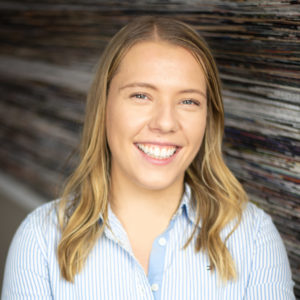 Carley Millhone was named the editor of Tomorrow’s Tech in 2017 and joined Babcox Media in 2015 as associate editor of Tire Review. Prior to joining Tire Review, Carley interned with the Chautauquan Daily in southwestern New York. She has a bachelor’s degree in magazine journalism and a minor in writing from Kent State University.