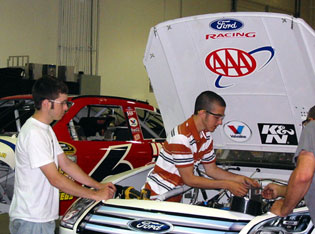 During the week of July 27, the winning students will ”job shadow” the race team leading up to and during the Pennsylvania 500 at Pocono Raceway. DeWALT will also donate three sets of tools to the winning students and their instructor to help jump start their careers as the nation’s best young automotive technicians.

“At Roush Fenway Racing, we truly embrace the importance of the Student Auto Skills competition and what it brings to the auto industry. The thousands of dedicated young people who put their hearts and souls into winning the nation’s premier competition for aspiring automotive technicians truly are the future of the automotive industry,” said Roush Fenway Racing Team Owner Jack Roush.

“They have the character and drive it takes to be a winner in life and on the racetrack, and for this reason, we are proud to join DeWALT, Ford and AAA in encouraging more students to consider career choices in motorsports, automotive repairs and roadside problem-solving.”

The dream learning experience, courtesy of DeWALT and Roush Fenway Racing, is one of the grand prizes for the two-person team that wins the Ford/AAA Student Auto Skills National Finals. The No. 17 DeWALT team will open up their garage to the students in an effort to showcase the career opportunities available on professional motorsports teams.

This learning experience will begin Tuesday, July 28 at Roush Fenway Racing’s facility in Concord, NC. For two days at the race shop, the students will get to shadow Blickensderfer and his crew members as the No. 17 DeWALT Ford Fusion cars are prepared for the August 2 Sprint Cup Series race in Long Pond, PA. The students and their instructor will then travel with the team to Pocono Raceway, where they will serve as honorary pit crew members during the NASCAR race weekend.

AAA and Ford—along with other affiliated companies—sponsor the nation’s largest competition for high school automotive technology students, giving thousands of teens the keys to start their careers in the automotive service industry. More than 9,700 high school juniors and seniors competed in this year’s competition with state finals currently underway to determine which 50 teams will move on to the National Finals in Dearborn, MI, June 14-16.

In state competitions held throughout April and May, the two-student teams are timed and tested on their abilities to correctly identify and fix intentionally installed “bugs” on identical Ford Focus vehicles.

Ford/AAA Student Auto Skills enables many of its participants to embark on promising careers in the automotive repair industry with a record-high $10.7 million in scholarships offered this year at both the state and national level. Demand for well-trained technicians remains on the rise with 60 percent of the independent mechanics reporting sales up last year over the previous year and 76 percent saying they expect more work, according to an Automotive Service Association survey.

Both the national and the state-wide competitions are organized with the support of Ford personnel, local automotive instructors and the AAA Approved Auto Repair program, a free public service AAA performs to identify quality repair facilities throughout the country.