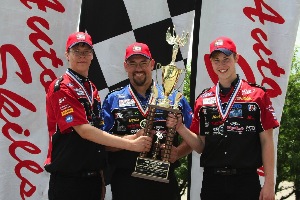 In a face-off between the nation’s top high school automotive technology students, the two-person team from Valley City, N.D., emerged as the "best of the best" at the 61st annual Ford/AAA Student Auto Skills National Finals held Tuesday on the front lawn at Ford World Headquarters.

Jonathan Anderson, 18, and McKenzie Nordland, 17, from Sheyenne Valley Area Career & Technology Center bested the elite field of teams representing each state, as they recorded the day’s top score under the tutelage of instructor James McFagden.

Following a shotgun start, all teams raced to repair their assigned vehicle. Each two-student team used their collective top-level knowledge and workmanship to diagnose and properly repair "bugs"-purposefully placed mechanical and electrical problems within the vehicle.

Teams that effectively repaired all of the planted "bugs" could shut the hood, start the engine and steer their vehicle through the finish line-where a judging team awaited to scrutinize their work.

Teams were tasked with diagnosing and repairing twelve "bugs" (which ranged from blown horn fuse, wiper switch malfunction and burnt out brake bulbs). North Dakota was the lone school to earn a "perfect car" score by flawlessly repairing all dozen "bugs" without any demerits for poor workmanship.

To earn the National Title, the time it took to repair the vehicle was combined with the results of a 100-question written exam the students took the previous day. North Dakota hoisted the championship trophy after shutting the hood of their "perfect car" at 61 minutes and 30 seconds.

This year’s competition awarded a record-high $11.5 million in scholarships to the participants, which was comprised of more than 10,500 juniors and seniors. In March, following an online exam, the highest-scorers advanced to their states’ hands-on competition, with the top teams from each state competing in the National Finals. 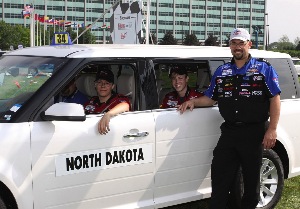 In addition to the scholarships, in July, the winning students will job shadow the No. 16 Roush Fenway Racing Con-way Freight race team leading up to the NASCAR race at O’Reilly Raceway Park in Indianapolis. While there, the students will get at-track tutoring by Larry McReynolds, one of the sport’s most recognized crew chiefs and this year’s national spokesperson for the Ford/AAA Auto Skills competition.

Texas finished as the runner-up, followed by schools from Connecticut, South Carolina and Oregon that rounded out the top 5. (See below for a complete listing of the top-10 finishing order).

"Technology advances in today’s automobiles demands that our country is stocked with the next generation of auto professionals that are as technically savvy as they are mechanically inclined. We saw 100 of the very best and brightest automotive technicians on display today," said John Nielsen, AAA National Director of Auto Repair and Buying Services.

"From coast to coast, each state has some immensely talented students that showed their skill and expertise in a time-crunched, competitive environment that brought out their very best."

At the National Finals, the top-10 teams received additional full and partial scholarships from some of the leading automotive technology institutions in the country, including Lincoln College of Technology, Universal Technical Institute, University of Northwestern Ohio, Ohio Technical College and WyoTech.

"As Ford vehicles of today continue to increase in technology and advanced features, auto technicians must be well-educated and highly-skilled to meet these increasing advancements," said Frederiek Toney, Vice President of Ford’s Customer Service Division.

"Ford is committed to training and retaining the best technicians in the industry and we are very proud of our continued involvement in this valuable competition, which is investing in our highly-skilled technicians of tomorrow."

The Ford/AAA Auto Skills competition began in 1949 when Harry Truman was in office. This year, AAA marks its 26th year with the competition, serving as a co-sponsor since 1984. Ford Motor Company celebrates its 16th year involved in the competition.

Note: We’ll have additional coverage in the August issue of Tomorrow’s Technician magazine.