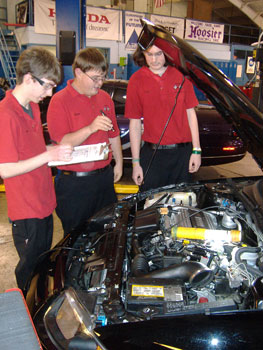 In a written statement issued yesterday, the Association for Career and Technical Education (ACTE) and the National Association of State Directors of Career Technical Education Consortium (NASDCTEc) said they appreciate the level funding proposal, but a stronger investment is needed to meet the growing needs of the students, the economy and the workforce.

In order to build a pipeline of skilled workers and address critical education challenges such as reducing the dropout rate, funding for the Perkins Act needs to be at least $1.4 billion for FY 2010 to support secondary and postsecondary career and technical education (CTE) programs.

Recently, ACTE, NASDCTEc and the American Association for Community Colleges sent a joint letter to President Obama requesting an increase in Perkins funding. The letter included broad support from 45 additional organizations including businesses such as Apple Inc., Syngenta, John Deere and First Technologies.

The letter also included signatures of eight Career and Technical Student Organizations; and other organizations such as the Manufacturing Skill Standards Council, which focuses on the core skills and knowledge needed by the nation’s production workers.

Perkins hasn’t received an increase in funding since 2002, and funding has actually decreased by $42 million since that time. Enrollment in CTE has increased by 6 million since 1999, with approximately 15.6 million students taking CTE courses during the 2006-07 school year.

If the Perkins Act received more funding, schools could utilize the money to enhance their programs of study, strengthen the integration of academics and CTE and create a stronger accountability system, say the groups. Students at schools with highly integrated rigorous academic and CTE programs have significantly higher achievement in reading, mathematics and science than do students at schools with less integrated programs, the Southern Regional Educational Board reports.

"It is refreshing that this Administration recognizes the need for an investment in career technical education, however I am disappointed that the President’s budget proposes flat funding for Perkins," said Kimberly Green, executive director of the National Association of State Directors of Career and Technical Education Consortium.

"Level funding this program is like putting a temporary patch on a hole in a dam that is ready to burst. Demand for these programs is up. The pace of technological change is increasing. Equipment needs are growing. To be able to support our country properly, CTE needs a significant new infusion of funding."

ACTE Executive Director Janet Bray commented, "Career and Technical Education plays a critical role in improving and growing the U.S. economy through secondary, postsecondary and workforce level training leading to high-skill, high-demand and high-need jobs. It plays a significant role in training adults to re-enter the workforce. As new industries develop and businesses evolve with technology, CTE programs are developing new curriculum and programs to adapt to the changing needs of today’s world."

According to the Office of Vocational and Adult Education, nearly 70% of all job openings in 2009-10 will require work-related training. With an estimate of approximately 2 million energy efficiency and renewable energy jobs being created over the next two years, CTE will play a critical role in workforce training for this emerging field and many other industries.

"Workforce development, including myriad green collar programs at community colleges, is the fastest growing area of higher education services in many states," said Steve Hoiberg, marketing manager, higher education at Siemens. "We see a direct benefit from CTE programs related to this issue."