OTC Awards $202,000 in Scholarships to Finalists of Hot Rodders of Tomorrow Engine Challenge - 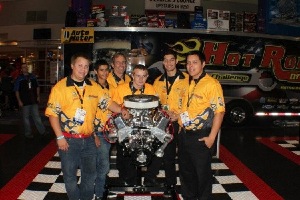 The finalists can redeem the scholarships at OTC, where students learn a wide array of technician skills in automotive, collision repair, high-performance and racing, welding and diesel, or at OTC’s branch campus the PowerSport Institute, where students train to service the motorcycles and other powersport vehicles of all major manufacturers. This is the second year OTC has awarded the scholarships to the event’s finalists.

“This year’s competition was fantastic, with the runner-up team’s average time only two minutes off the winner’s time,” said Tom King, director of enrollment management, OTC. “All the participants exhibited high levels of skill, interest and dedication, and those are the attributes that fuel the efforts of the Hot Rodders of Tomorrow and our college.” 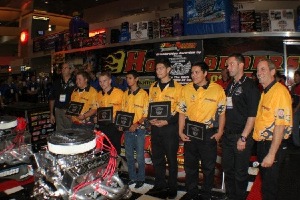 First place went to Team Autometer from Loara High School in Anaheim, CA, where the team averaged 31:00 to successfully disassemble and reassemble a 350 Chevy engine using only hand tools, while judges and major industry figures like Vic Edelbrock, Rich Evans and others watched. Each team member won a $10,000 OTC scholarship.

Team PRW from Fremd High School in Palatine, IL, took fifth place and $5,000 scholarships for each of its members; and Team Painless from Lakeshore High School in Stevensville, MI, was the sixth-place finalist, earning each member a $4,000 OTC scholarship.

For more on the contest, photos and articles, visit http://www.hotroddersoftomorrow.com/