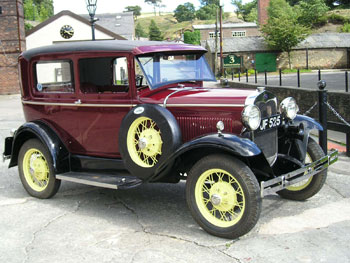 Launched in America during December 1927, on the back of one of the biggest advertising campaigns the world had ever seen, the Ford Model A was an outstanding automotive success, with more than five million built by the time production ceased.

Even today, it is regarded as one of the most popular collector cars in the world, some half a million thought to have been restored, customized and preserved in the States, although comparatively rare in this country.

The newly-restored Model A owned by John Falder, MD of Manchester paint manufacturer HMG Paints, holds a special place in the history of the company and the city itself. Dating back to September 1930, it is amongst the last Model As to have been built at Ford’s Trafford Park, Manchester plant, before production was transferred to Dagenham, and it first took to the road during the very same year that HMG was founded by Harold Marcel Guest and John’s grandfather, Herbert Falder. It also featured a unique contemporary ‘hatchback’ design, with a rear opening door to facilitate its use as a commercial traveller’s car.

“With our 80th anniversary coming up in less than two years, we thought we would restore it to its former glory and showcase our traditional-style automotive paints,” says John Falder. “We first acquired the Model A over 30 years ago and used it for family outings, often for commuting to work over the years, and it earned a special place in our hearts. Even its seemingly personalised numberplate, JF 525, was originally fitted to the car, while its vintage and Manchester origins fitted in perfectly with our company history.”

The second of three generations of panel beaters and restorers, Norman worked with his sons Craig and Simon on the Model A over a number of years, a job that he describes as one of the most challenging ever.

But first, a brief automotive history lesson. The Model A was introduced as the successor to the previous Model T and differed entirely in styling and engineering from its predecessor, with a choice of 50 body styles and 40 paintwork colours, but not initially black.

It was the first Ford to use a conventional set of control pedals, with three-speed sliding gear transmission, and featured hydraulic shock absorbers and welded steel-spoke wheels. With sales booming, Henry Ford decided to establish his first factory outside of North America and acquired a disused tram works south of Manchester, at Trafford Park, and by 1913 the plant boasted Europe’s first moving assembly line.

By 1925, Trafford Park had built Britain’s 300,000th Ford and it continued to produce the Model A and other vehicles, until the Dagenham, East London plant opened in October 1931.

Registered on 27th September 1930, John Falder’s Model A, a 2-door Tudor Sedan, was thus one of the last Manchester-built models, featuring a different 2 litre engine to the US 201 cubic inch (3.3 litre) unit. It took to the road around the time that Herbert Falder and eponymous co-founder, the soon-to-depart Harold Marcel Guest, were setting up H Marcel Guest, first producing cellulose capping solutions and soon cellulose automotive paints.

The Falder family bought JF 525 in 1978 – in a very poor state, but with a complete history – and ran the car for around twenty years, adding a further 20,000 miles, before pensioning off the venerable Ford. Later, HMG’s semi-retired maintenance manager, Tommy Wright, worked scrupulously on refurbishing the vehicle’s chassis at the Collyhurst Road factory, but sadly passed away before completing the job, so this professional restoration is also regarded as ‘Tommy’s legacy’.

At first sight, the Model A appeared to be in sound condition, but when Norman Isles burned away layer upon layer of paint, there was precious little steel remaining. The original body panels were pressed on large machines, but Norman and his sons had to replicate every surface and swathe line by hand.

It also meant working in an unfamiliar material, since most of the classic Rolls, Bentleys, Astons, Ferraris, even a replica James Dean Porsche 550 Spyder, they have restored, involved aluminium bodywork. Having stripped the vehicle down to the ladder-type rolled steel chassis, they set about the time-consuming task of rebuilding each panel by hand.

The frame for the roof and windscreen was made from comb-jointed timber, again fully repaired and reglued, while the composite roof was rebuilt to original specification from wood, wire netting, hessian and vinyl.

Replacement parts were sourced from America and this country, while rebuilding references were sought from other British Model A owners, although those closest to hand were mainly Coupe, Truck or Fordor Saloon models. Meantime, the steel spoke wheels were rebuilt and refinished by HMG in-house, in their original bright yellow finish.

Naturally enough, the bodywork has been protected with HMG’s advanced corrosion-resistant primer/undercoat and refinished in its traditional cellulose topcoat, in maroon and black with a gold swathe line, to reflect the company’s corporate identity and its distinctive paint cans.

Although the cost of restoration work is likely to exceed the vehicle’s actual worth, it is a fully-working embodiment of HMG’s company heritage and showcases how high performance paint protects, preserves and beautifies classic vehicles, so in that respect it is priceless.