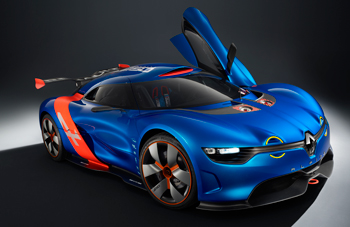 The Alpine Berlinette turns 50 this year and, to mark the event, Renault has created a concept car named Renault Alpine A110-50, dedicated to performance and driving enjoyment.

So what’s in a name? In some cases, the heritage of a name is like a national treasure – and that’s certainly true for Alpine. Its DNA blends Renault’s sporting passion and technical expertise.

• The Renault Alpine A110-50 concept car translates the most characteristic design features of the original A110 in a modern and spectacular way. 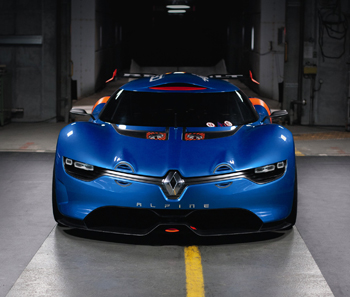 • The carbon-fiber bodywork features a new shade of blue which refreshes and reinterprets the famous original ‘Alpine Blue.’

• Produced with the renowned expertise of Renault Sport Technologies, the Renault Alpine A110-50 concept is imbued with the world of motorsport.

It benefits from the experience gained from the racing Mégane Trophy by using the same technical platform.

The A110-50 concept boasts many technical characteristics.

It uses the Renault V4Y block as the foundation for the 3.5L 24-valve 400hp V6 engine mounted in a mid-rear position. The crankcase (semi-wet), moving parts (pistons, connecting rods, crankshaft), valve train (camshafts and valve springs) and exhaust system are specific compared to the version featured on productions models. 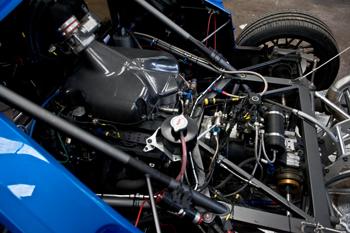 Furthermore, the Renault Alpine A110-50 uses the carbon air intake employed for Mégane Trophy V6. The inlet manifold is fed by a new roof-mounted air intake.

This development broadens the engine’s power band, with additional horsepower at all engine speeds. The engine mapping has been optimized for these modifications.

The Renault Alpine concept is fitted with a semi-automatic six-speed sequential gearbox, as well as a twin-plate clutch that can be controlled using either the clutch pedal or a paddle on the steering wheel.

The 21-inch wheels, with a single central nut, are specific to this car and fitted with road-homologated Michelin tires.

The Sachs dampers can be adjusted in compression and extension, and are mounted directly onto the lower wishbones. There are numerous different set-up options: castor, camber and alignment, ride height and anti-roll. 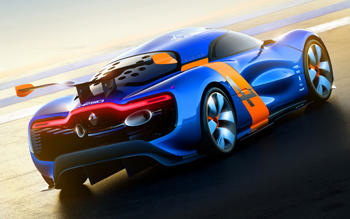 However, in order to improve driver feedback, driving aids like ABS, traction control, etc., are not used.

The braking capability of the Renault Alpine matches its performance. At the front, large 356mm-diameter steel discs are slowed by six-piston calipers. At the rear, the discs are 330mm in diameter, while the calipers are four-piston models.

“Developing this concept car was a great adventure. It was a catalyst for creativity. We wanted to make a Berlinette that was of our time, and which boldly embodies Renault’s passion for motorsport. We were guided by our hearts and emotions.” Axel Breun, Concept and Show Car Director.