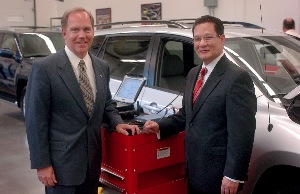 “We’ve been partners here since 1988,” Bergen noted. “And to attest to the effectiveness of this training curriculum at Shoreline, over that time we’ve hired and placed 170 T-TEN (Toyota Technical Education Network) graduates in 26 Washington Toyota and Lexus dealers.”

Toyota (including the company’s Portland regional offices) and the Puget Sound Automotive Dealer Association each contributed $1 million toward construction of the 26,000 sq. ft. addition on the Shoreline campus, just north of Seattle. 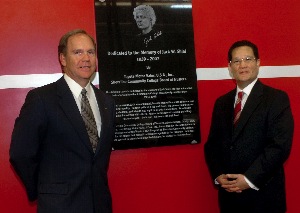 In addition to Toyota, manufacturer-specific training at Shoreline is provided by Honda, General Motors and Chrysler. Other industry training programs are conducted by Hyundai, Volvo, Subaru, Nissan, Hunter Engineering and Snap-on Industrial.

Bergen, who is also an associate dean at the University of Toyota, took time at the dedication to acknowledge installation of a plaque honoring the late Jack Shiel, first T-TEN and automotive instructor at the college. Shiel served at Shoreline from 1983 to 2006.

“He changed a lot of people’s lives here,” noted Bergen. “Jack was not content to simply train good technicians – he wanted to train the best.”