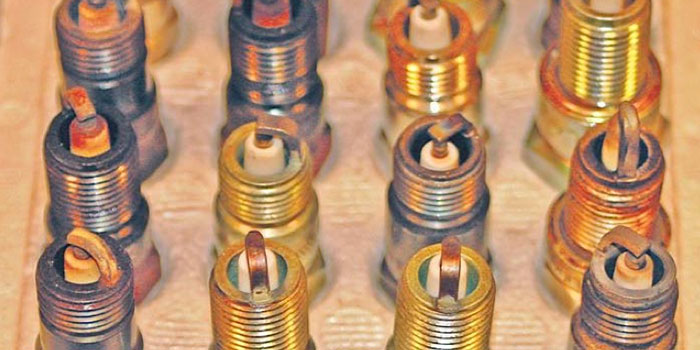 If you are replacing spark plugs to solve a misfire problem, you might want to take a look at the original plugs to make sure you are replacing them for the right reasons. Most original equipment spark plugs have a life of more than 100,000 miles thanks to electrodes that contain precious metals like platinum and iridium. If the plugs fail sooner than the recommended interval, solve the problem before installing new plugs.

The main culprit in these problems is vacuum generated in the cylinders sucking engine oil past the rings and into the combustion chamber. On vehicles with cylinder deactivation, the deactivated cylinder has a negative pressure and would draw oil droplets in the crankcase past the ring and eventually into the converter. This has happened on some GM and Honda engines. On some vehicles with variable valve timing (typically on the exhaust and intake cams), the valve timing could produce higher than normal vacuum pressures that could suck oil past the rings. This was the case for some recent Toyota, Honda and GM models. The customer would report increased oil consumption that exceeded a quart every 1,000 miles.

The oil consumption problem must be solved first before the spark plugs are replaced, and in some cases, the converter will need to be replaced. The most common fix is new engine management software that needs to be reflashed onto the ECM/PCM, which is designed to reduce negative cylinder pressures. Some manufacturers have also released special splash shields and oil valves to alleviate the issue. These problems may occur on vehicles with as little as 20,000 miles. Internal coolant leaks can foul a spark plug and cause a misfire. The problem could be a leaking intake manifold or a head gasket, and the fouled plug might be localized to one or two adjacent cylinders. The burned coolant leaves deposits on the electrodes and insulator, creating hot spots that could cause pre-ignition and a misfire code being set.

When the plug is pulled, it might have a chalky appearance on the ground strap and center electrode. Modern coolants do not cause this type of buildup quickly due to the reduction of phosphate, zinc and other additives that can contaminate the catalytic converters. Unfortunately, it also means that drivers will run a vehicle with a coolant leak for several thousand miles while the plug becomes slowly fouled. In the past, the converter would become clogged and stop the engine before significant damaged was caused.

The one thing the modern combustion chamber hates is chaotic turbulent air caused by carbon deposits in the chamber or on the intake valves. Turbulence can cause an uneven distribution of the fuel droplets before ignition and cause a misfire. This is especially true for direct injection vehicles with the lean air/fuel ratios.

Leaner mixtures and higher combustion pressures can make the problem worse over time. A direct fuel injection motor produces more energy from a given amount of fuel and air than a port fuel injection engine. Today’s engines operate on the razor’s edge between optimal efficiency and a misfire. There is not much room for error, such as with hot spots in the combustion chamber or a worn spark plug.

When a hot spot or sub-optimal flame front is created due to turbulent air, the amount of unburned fuel in the combustion chamber increases. When the valve opens during the intake stroke, it might come in contact with these byproducts, and unlike the exhaust valve, the gases passing by are not hot enough to burn them off.

No matter where or how the carbon deposits develop, the chaotic air will prevent the spark plug from igniting the best possible flame front in the cylinder. The spark plug might become fouled or become damaged due to detonation.