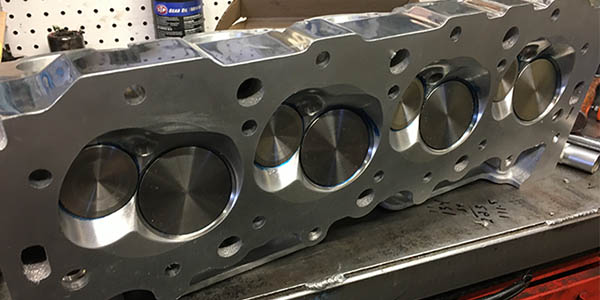 In simple terms, the cylinder head is just a casting that tops off the engine block, holds the valves and forms the combustion chambers. Working in combination with the camshaft(s), induction and exhaust systems, the head determines how the engine breathes, the engine’s power curve and personality. The “right” cylinder head will deliver peak power in the preferred rpm range, providing good throttle response and producing the kind of torque and horsepower numbers your customers demand.

Using the wrong head can ruin your reputation.

Some people pick a set of cylinder heads based on previous experience, reputation or simply brand recognition. Some look for highest airflow claims while others take the price path. The best selection process, of course, is rarely so simple. 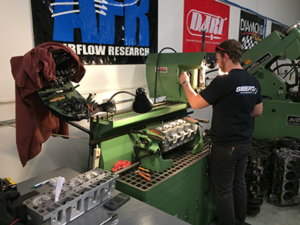 Shawn Guinty of Siebert Performance works on some heads.

Price, performance and availability are all important considerations in the head selection process. But what’s most important is choosing a set of cylinder heads that is right for the engine and the application. Street performance engines in particular, require you to choose carefully.

Because each application has its own unique requirements, heads need to have the right flow characteristics. Variables such as engine displacement, compression ratio, camshaft lift and duration specifications, rpm range (where the engine should make the most horsepower and torque), and target horsepower (within realistic guidelines) must be considered, along with vehicle weight, transmission (manual or automatic), torque converter stall speed (if automatic), gearing (transmission and differential) and, most importantly, the application itself.

Exactly what constitutes street performance? The lines between street and race have become so blurred that it depends on whom you talk to whether an engine or component is race or street. Probably the most important thing an engine builder can do is interview his customer to determine his concept of street performance. If the customer wants to emulate his TV street racing heroes, then a full-on race head is probably the best choice. If, on the other hand, it is a daily driver with a stock undecarriage and rear end but a thirst for a little more life, a more moderate approach is probably called for. The wrong cylinder head will be just as appropriate as any other poorly chosen component.

Street engines tend to be most active between idle and part throttle so they must have good low and mid-range torque and throttle response to be drivable – especially in heavier cars with automatic transmissions. For this type of application, a set of heads with stock to moderately larger intake runner volumes to keep air velocity high may be most appropriate. Since peak valve lift is unlikely to exceed more than about half an inch with a typical street cam, a set of heads that claims huge airflow numbers at extreme valve lifts will probably not be ideal. Too much head can be counter productive in this type of application.

Every cylinder head manufacturer offers a variety of different cylinder heads to meet all of the different needs and will be the best resource you can find to select the proper piece. Remember, bigger isn’t always better – just because a head makes a lot of power on one engine doesn’t mean it’s right for EVERY engine.

Generally speaking, smaller intake port volumes will produce more low-end torque and throttle response while larger intake port volumes allow more flow at higher RPMs for peak horsepower numbers. But airflow isn’t dictated by just one factor. Runner height (raised ports typically flow better), port contour (especially the profile of the short side radius where the runner flows into the bowl area above the valve), the cross-sectional area of the intake runner and its relationship to the size of the valve opening, the angle of the valve stem (shallower usually flows better), valve seat and valve face angles and even the shape of the combustion chamber can also influence airflow, for better or worse.

It’s the ability to properly combine all these factors into the proper configuration that will provide the best performance – head manufacturers and head porters guard those secrets carefully, and recognize that inexperience and enthusiasm combined with a hand-held grinding tool can do much more harm than good.

An important point to remember here is to always check valve-to-piston clearance with the head installed on the block to make sure there are no interference problems at peak valve lift. Milled heads, larger diameter valves, reduced deck height, a higher lift cam and/or rocker arm ratio can all add up to create interference problems if you fail to take everything into account.

Aluminum heads are lighter than cast iron, saving maybe 25 to 30 lbs. per head depending on the application. In a 2,500 lb. racecar it may be a big deal – in a 3,500 to 4,500 lb. street car, that savings may not be noticeable. Even so, lighter is usually considered better for performance.

Aluminum heads are typically easier to machine than cast iron because the metal is softer, and the heads are easier to repair because aluminum can be TIG welded to fix cracks and other damage. Cracks in cast iron can be drilled and pinned, or even furnace welded, but that’s not easy and requires a high level of skill and experience to prevent repeat cracking.

Aluminum conducts heat faster than cast iron. This helps cool the engine and allows a higher compression ratio with less risk of pre-ignition or detonation – but it also sucks heat out of the combustion chamber and actually reduces combustion efficiency somewhat. At high rpm, there’s less time per combustion event for heat to escape through the cylinder head so the loss in thermal efficiency is not as great. 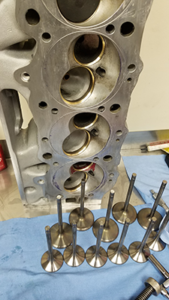 Applying a metallic-ceramic thermal coating to the combustion chambers can improve heat retention and thermal efficiency. Some who use these types of thermal barrier coatings say they have gained 30 to 40 horsepower on the dyno over uncoated heads on the same engine.

On a street engine, cast iron heads help an engine reach operating temperature more quickly after a cold start (good for emissions and cold drivability), while retaining more heat for improved fuel economy and thermal efficiency. Most cast iron heads are also less expensive than aluminum heads because the metal is less expensive.

Other items to consider when choosing a set of heads includes valve sizes (intake and exhaust), the quality of the valve seat material, the type of valve guides, and the diameter and location of the spring pads.

Do you want assembled heads ready to install, fully machined and unassembled heads you can assemble yourself, semi-finished heads so you can do the final valve work and assembly, or raw castings that you can CNC machine yourself in-house?

In the end, street performance is not just about huge flow numbers and port volumes. It is the proper sizing and velocity that determines how well a cylinder head drives on the street. Thankfully, there are more choices than ever for selecting cylinder heads – the challenge may be narrowing down your options.