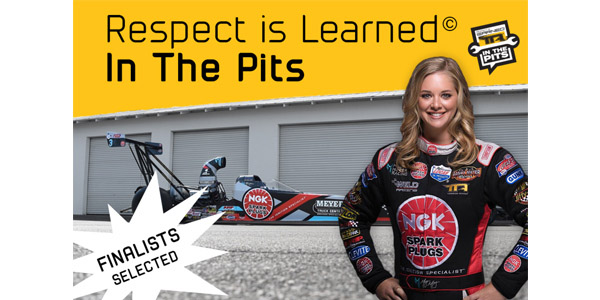 Technician.Academy has announced the four finalists for this year’s Respect is Learned In The Pits contest. One of the four will be selected to win a weekend with Randy Meyer Racing at the Chevrolet Performance U.S. Nationals on Sept. 1­3 in Indianapolis. The chosen student will work hands-on in the pits with the RMR drag team handling Megan Meyer’s Top Alcohol dragster at the Lucas Oil Raceway.

To apply for the Respect is Learned In The Pits contest, applicants provided Technician.Academy and Randy Meyer Racing a brief explanation of why they should be considered to work in the pits with the Top Alcohol Dragster team. From the many applications received, four finalists were selected based on their eligibility and passion for the automotive industry/motorsports.
In order to select one winner, the four finalists will provide Technician.Academy with a short two- or three-minute video that highlights their interests in motorsports, any possible interactions with the sport, and/or why they deserve to win. The Technician.Academy team and a panel of automotive professionals will decide the winner.

The Respect is Learned In The Pits winner will be announced on July 27.