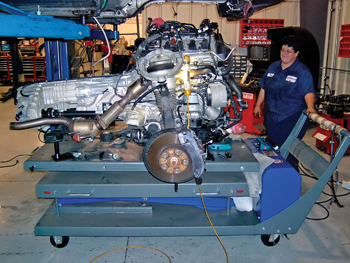 Little did Kipp Wierenga know that a fascination with her father’s tools at 5 years of age would influence her decision to become an automotive repair technician.

But it did just that and 31 years later, she’s still interested in them — enough to earn the distinction of being the first woman in North America to become a Volkswagen Certified Master Technician.

It was while living in Indianapolis in the early ’90s that the Vorderman Volkswagen employee saw a commercial for Lincoln Technical Institute’s automotive technician training program — and her journey toward becoming a Master Technician began.

“The commercial indicated that this was a career that was obtainable in a short time period and paid well with great job security,” Wierenga said. “I then started thinking back to when I was a child, probably about five years old, and looking in my father’s toolbox just being amazed at all of the tools. I would play with them like most girls played with dolls.”

But repairing cars wasn’t her first choice of jobs; Wierenga preferred dirt bikes and motorcycles while she was growing up.
“I liked dirt bikes and when I asked for one when I was around 8, I was told I had to maintain it if I got one,” she said. “I think that Dad thought that would be a deterrent. It wasn’t: I had already taken my bicycle apart to paint it, and I put it back together without any help. So changing oil was sounded cool.

“I grew out of the dirt bike and fell in love with motorcycles,” she continued. “As far as my cars went, I really didn’t take care of them or even do much work on them myself. I was really interested in being a motorcycle technician. But here in Indiana, that didn’t seem like a wise career move.” 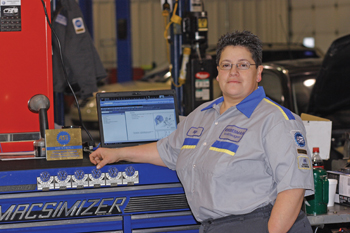 The Lincoln Tech commercial convinced Wierenga to investigate further. She went in for an interview and was convinced to enter the program. It was while earning her degree that Wierenga ran into her first challenge: No one would hire her.

“There were not a lot of people interested in having someone without any experience work for them,” she said. “I had no experience, and I had just started school. I’m not sure if being a woman was part of the reason or not, but I try to believe it was just the lack of experience.”

But Wierenga persevered and landed her first job as a technician at a quick lube oil change facility. While she was good at talking with customers, and they responded well to her, not everyone was pleased with the fact that a woman was working on their car.

Wierenga remembers one incident in particular, when a male customer drove in to have the oil changed on his vehicle. He informed the manager that he didn’t want a woman working on his car. Meanwhile, Wierenga had already went below to the pit to do the oil change, and while she knew there was a problem, she didn’t know what it was all about.

“I didn’t hear all of this because I was downstairs,” she says. “All that I knew was that there was some sort of problem because someone shut the customer’s hood and the vehicle drove off. Later that day another co-worker of mine informed me that the manager shut the gentleman’s hood and simply told him that if I wasn’t good enough to change his oil, then there was no one here that could because I was the best he had. 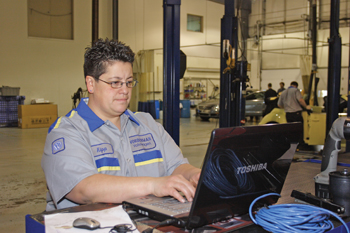 Even after the customer had agreed and said, ‘Okay, then let her,’ the manager still asked him to leave. I was shocked to have someone stand up to another person, let alone a customer, for me like that.”

Fortunately, Wierenga says that was an isolated incident. Even so, she points out that hard work and always striving to improve will help any technician earn respect and advance in his or her career.

In Wierenga’s opinion, the time is right for more women to think about careers in the automotive repair industry, as more complicated vehicles enter the market and require a different kind of technician.

“Ten to 15 years ago, shops were not really interested in slower-paced workers —and yes, I do think that some women are slower-paced workers,” she says. “Shops used to be able to have one or two guys diagnosis a vehicle, then someone else would replace the necessary parts while they diagnosed the next vehicle. Now with the level of technology and competition in the industry, there is a high demand for a more thorough and detail-oriented people. I’m biased but with experience. Let’s face it ladies, we fit that bill.”

Upon completing her degree at Lincoln Tech, Wierenga began her career as a service tech for Audi, but later switched to Volkswagen and began working toward earning her Volkswagen Master Technician certification. She passed the nine tests required to become ASE certified and then took all the necessary Volkswagen-specific classes.

The entire process took 13 years from start to finish, mainly because of scheduling conflicts: Some classes just weren’t offered when she was available. Even so, she persevered and finally reached her goal last year. And she would give that advice to any female student interested in a career as an automotive repair technician.

“Don’t let anything stop you,” she concludes. “This career is challenging yet very satisfying. Remember that everyone — male or female — has to start at the bottom and work their way up. Little if nothing is handed to you.

"If you don’t get the first job, don’t assume that it’s because you’re a woman. Just keep trying. When you do get your first job realize that no matter what career you choose, most of the time people are not as welcoming as you wish they would be — but just give them time. If you’re a hard worker and eager to learn, they will come around.”