les/11_01_2007/15171107ES4jpg_00000001872.jpg” border=”0″ ” align=”right” alt=”diagram of an oil seal section on a rotary engine. “/>
Tackling Environmental Issues
Zero overlap between the intake and exhaust ports results in enhanced thermal efficiency for the RENESIS engine, allowing a much leaner air/fuel mixture for fuel efficiency when idling compared to the 13B-REW rotary engine in the RX-7. In addition, thanks to the efficiency inherent in the rotary engine, the RX-8 operates with a lean mixture even during high-speed, high-load operation.

Rotary engines also have structural qualities that cause them to generate less NOx (nitrogen oxide) than conventional engines. RENESIS’ side-exhaust layout retains unburned HC (hydrocarbons) for the next combustion cycle, further lowering emissions. In addition, a newly developed catalytic converter for the rotary engine is teamed with a double-skin exhaust manifold that maintains a high exhaust-gas temperature to improve catalyst activation on engine start, even in cold
conditions. 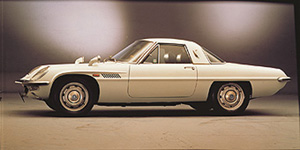 On May 30, 1967, Mazda commenced sales of the world’s first dual-rotor RE car, the Cosmo Sport (seen here). Following this, Mazda introduced other rotary engine vehicles to the market, including the Familia Rotary Coupe, Savanna, RX-7 and Eunos Cosmo. With a number of improvements in fuel economy and environmental performance over the years, sales of Mazda vehicles equipped with rotary engines are continuing.

Power Loss Problems
In August 2006, Mazda announced that it would recall its 2004, 2005 and some 2006 Mazda RX-8s due to a miscalculation with oil metering of its RENESIS engine.

Mazda reported that this had led to the engines in some RX-8s to experience problems with severe power loss and rough idle, most notably in warm climates and those exposed to high traffic
conditions.

Mazda’s recall allowed the models to be tested for the power-loss problem, and that all engines that failed a vacuum test were replaced at no charge, even if the car was out of warranty.

The replacement engines also corrected other issues ranging from flooding, hard starting and complete loss of compression. Mazda said that only about 1% of the RENESIS engines needed to be replaced.

However, on all the vehicles that did not require an engine replacement, Mazda said that the ECU was reflashed to provide for more oil injection at idle and under low rpm driving.

Under the recall, the catalytic converter and leading spark plugs were also checked and replaced as needed. Mazda then extended all recalled vehicles’ drivetrain warranty to five years/60,000 miles.

It should be noted here that full synthetic oils should not be used in Mazda rotary engines, which have unique and specific lubrication requirements. Always check the vehicle owner’s manual.

Did You Know?
Mazda began its development of the rotary engine in 1961. At the time, many of the world’s automakers were involved in rotary engine research and development, but by the latter half of the 1970s, Mazda was the only car company with a rotary engine R&D program.

Wankel 101
For technicians who are not familiar with the Wankel engine, the best way to explain a rotary engine design is that it is composed of a cocoon-shaped housing and a triangular-shaped rotor inside of it. The space between the rotor and the housing wall provides the chamber for internal combustion and the pressure of expanding gases serves to turn the rotor. In order to make the rotary engine work as an internal combustion engine, the four processes of intake, compression, combustion and exhaust had to be performed in succession in the working chamber.

Suppose that the triangular-shaped rotor were concentrically placed inside a true circular housing. In this case, the working chamber would not vary in volume as the rotor turned inside the housing. Even if the air/fuel mixture were ignited there, the expansion pressure of combustion gas would merely work toward the center of the rotor and would not result in rotation. That was why the inner periphery of the housing was contoured as a trochoid-shape and assembled with the rotor installed on an eccentric shaft.

The working chamber changes in volume twice per revolution, thus the four processes of the internal combustion engine could be achieved. With the Wankel rotary engine (named after engine pioneer Dr. Felix Wankel who developed the Wankel-type rotary engine in 1957), the rotor’s apices follow the oval contour of the inner periphery of the engine casing while remaining in contact with the gear on the output shaft, which is also in eccentric orbit around the center point of the engine casing. A phase gear mechanism dictates the orbit of the triangular rotor. The phase gear consists of an inner-toothed gear ring fixed on the inside of the rotor and an outer-toothed gear fixed on an eccentric shaft. If the rotor gear were to have 30 teeth inside it, the shaft gear would have 20 teeth on its perimeter so the gear ratio is 3:2. Due to this gear ratio, the rate of turning speed between the rotor and the shaft is defined as 1:3.

One of the three sides of a triangle is forced toward the center of the eccentric shaft as a result. This movement consists of two divided forces. One being the force toward the output shaft center and the other is the tangential force, which rotates the output shaft. 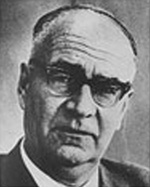 The rotary engine was invented by a German named Felix Wankel in 1957. However, nearly 40 years before its invention, the 17-year-old Wankel had a strange dream in the summer of 1919 which led to the idea of the rotary engine. In the dream, according to Mazda sources, Wankel went to a concert in his own handmade car. He even remembers boasting to his friends in the dream; "my car has a new type of engine: a half-turbine half-reciprocated engine. I invented it!" When he woke the next morning, he was convinced that the dream was a premonition of the birth of a new type of gasoline engine. At the time, he had no fundamental knowledge about internal combustion engines, but he believed that an engine could achieve four strokes – intake, compression, combustion and exhaust – while rotating. This intuition actually triggered the birth of the rotary engine, which converts rotary motion directly into driving force with an almost perfectly smooth operation; while at the same time, meeting  the most stringent technical standards. Wankel’s dream and intuition went on to drive his entire life. 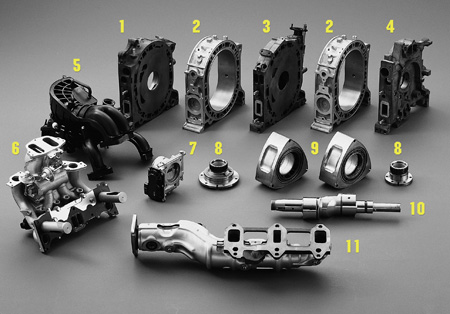 Each process is carried out in a different place in the trochoid chamber. This is significantly different from the reciprocating engine, where those four processes are carried out within each cylinder. 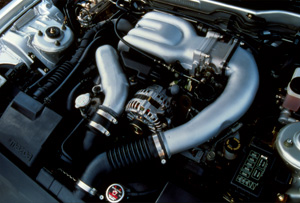 Another difference is the turning angle per process. The reciprocating engine turns 180° while the rotary engine turns 270°, one-and-a-half times that of the reciprocating engine. In other words, in the reciprocating engine, the crankshaft (output shaft) makes two turns (720°) during the four processes, while in the rotary engine, the eccentric shaft (output shaft) makes three turns (1,080°) while the rotor makes one turn. In this way, the rotary engine has a longer process time, causes less torque fluctuation and results in smooth operation. Furthermore, even in high-speed running, the rotor’s rpm is comparatively slower, thus, the more relaxed timing constraints of the intake and the exhaust processes facilitate the development of systems aimed at attaining higher performance.