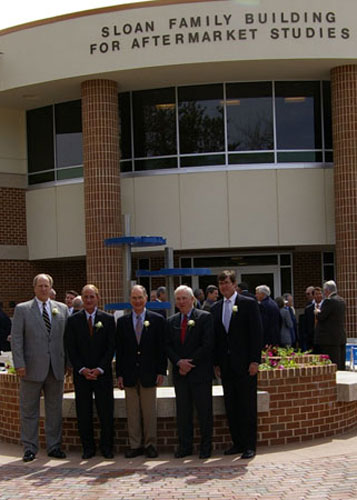 For the fifth year in a row, the editorial staff of aftermarketNews has selected what it determined to be the most significant events to impact the automotive aftermarket in the past year. Using data culled from reader traffic patterns, this year’s list is presented in order of popularity, as defined by number of reader hits.

Northwood Opens Sloan Building for Aftermarket Studies – Following the official dedication ceremony in May, the automotive aftermarket now has its very own educational home. Named in honor of O. Temple Sloan, Jr., founder of General Parts International, Inc. (GPI) and CARQUEST, his brother, C. Hamilton Sloan, an early partner in GPI, and their family members, the Sloan Building for Aftermarket Studies now hosts classes and programs for the University of the Aftermarket, including the newly established CARQUEST School of Business, a new university-level business educational experience

GM’s Potential Sale of ACDelco – Just before the news began to heat up that the Detroit 3 were nearly bankrupt, General Motors (GM) announced that it was exploring a potential sale of ACDelco, its global independent aftermarket parts business, a brand of GM Service & Parts Operations. GM said in a statement that the sale is expected to promote more rapid growth of ACDelco globally. GM’s sale of ACDelco’s assets could potentially bring $2-$4 billion in liquidity, funds we later learned it desperately needed.

The Struggle in Detroit – Just a month after GM announced that it was considering selling its parts and service business, the sky began to fall in Detroit. Automakers and suppliers pled with Congress to introduce a bill that would provide financial assistance to the struggling Detroit 3 but the bill failed.

With only enough cash to get through to the end of the year, business at GM and Chrysler was looking bleak, until the Bush administration stepped in. Mid-December, President Bush announced that the government would give Chrysler and GM $17.4 billion of the $700 billion in T.A.R.P. funds originally earmarked for the bailout on Wall Street.

Nearly 4,000 Car Dealerships Predicted to Close in ’08 – The primary reason the Detroit 3 were in such dire straights was the dramatic drop in new car sales this year. As of November, approximately 6.4 million cars were sold in the U.S. in 2008, down 8.3 percent from 2007.

Gas guzzlers like trucks and SUVs fared even worse, dropping 23 percent and 34 percent respectively. As a result, experts predicted that about 3,800 new car dealerships would close down in 2008. A Grant Thorton study released in October said that about 18 percent of the total number of U.S. car dealerships (about 20,770) would need to close to maintain sales per dealer at last year’s level of about 750 units.

The Many Recalls of Chinese Tire Valve Stems – In June, the National Highway Traffic Safety Administration (NHTSA) announced that a distributor of Chinese-made tire valve stems had agreed to recall 6 million valve stems, after it was found that that the stems could crack and tires could gradually lose pressure after they had been in use for more than six months.

The valves were distributed by Tech International and manufactured by Shanghai Baolong Industries Co. In a separate move, NHTSA opened a preliminary investigation into another 30 million Chinese-made "snap-in" tire valve stems in the wake of a Nov. 11 fatal crash. Those valve stems may have come out of the same Chinese factory that made the recalled valve stems distributed by Tech International. In October, more than 1 million Ford vehicles were being investigated after reports of tires leaking air due to bad valve stems manufactured by a Chinese company. Another investigation was launched in December.

Dill Air Controls Products announced the voluntary recall of some 1.8 million automobile tire stem valves sold in the U.S. between November 2006 and July 2007. The snap-in rubber valve stems under recall were manufactured by Topseal (Shanghai) Auto-Parts Co., and imported and distributed by Dill Air Controls Products under its Dill ACP brand name.

Major Bosch Acquisitions in ’08 –  Bosch made two notable acquisitions in 2008, expanding its business in two different areas, one of them, a new venture for the German company. In September, Bosch closed on its acquisition of the friction business of Morse Automotive Corp. Creating its entry into the brake pad and brake shoe manufacturing business, Bosch will integrate the former Morse friction unit into the newly established Bosch Brake Components LLC, which will become part of Bosch’s North American Automotive Aftermarket division.

Schaeffler to Buy Continental – While not official yet, ball bearing maker Schaeffler Group is well on its way to acquiring Continental Corp. With rumors of a takeover first announced in July, the acquisition has had many stops and starts, as concerns over questionable stock ownership initially slowed the deal. As of December 22, European Union antitrust regulators approved the takeover of the region’s second-largest car-parts maker, paving the way for the deal to be complete within 25 days, according to the company.

States Work to Pass Right to Repair Bills – While another Congressional session closed without any movement on the Motor Vehicle Owners’ Right to Repair act, the bill made significant progress this year at the state level. The bill was introduced in 2008 in Massachusetts, New York, New Jersey and Oklahoma.

The bill made the most progress at the state level in New Jersey, where in October the New Jersey Assembly passed the bill (A-803) by a vote of 49 in favor, 22 against and 8 abstaining. In late December, a coalition representing more than 1,500 independent automotive repair shops and related industries announced it will push for passage of the Massachusetts Motor Vehicle Owners’ Right to Repair Act.

O’Reilly Buys CSK – In a move that will expand its presence on the national platform, Missouri-based O’Reilly Auto Parts successfully completed its acquisition of auto parts retailer CSK Corp. in 2008 for $1 billion. The integration of CSK Auto is expected to be completed in 2011 and consists primarily of systems, infrastructure, inventory and culture integration.

O’Reilly will add four distribution centers in the western United States, which will provide converted CSK stores same-day or overnight delivery access to more than 116,000 SKUs. O’Reilly recently signed purchase contracts to acquire facilities located in the metropolitan areas of Los Angeles, Calif., and Seattle, Wash., for the first two of these distribution centers. The company said it is currently evaluating sites for the final distribution centers that will be located in Colorado and Utah.

Uni-Select Buys Beck/Arnley – In May, Uni-Select entered into an agreement to purchase Beck/Arnley Worldparts Corp. and its Canadian subsidiary Beck/Arnley Worldparts Canada ULC. With this unique acquisition of a manufacturer by a distribution group, Uni-Select plans for this to be the cornerstone of a strategic initiative to improve parts coverage and better service the growing import nameplate fleet in North America. It will be the start of a new Foreign Nameplate Division at Uni-Select Inc. Since the sale was finalized in June, the two companies began focusing on implementation plans.