Under the Hood: Cutting Back on Carbs? - 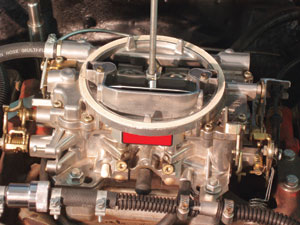 Although it’s hard to believe that nearly 20 years have passed since the last carburetor was installed on a mass-produced vehicle, carburetors are still the fuel system of choice for many off-road, street performance and track racing enthusiasts.

To help you understand how to optimize the performance of carburetors used in performance applications, we’ll cover the basic operating principles and adjustment procedures for several popular aftermarket and original equipment lines of carburetors including Edelbrock, Holley, Rochester and Motorcraft. Because of its simplicity and ease of repair, I’ll begin by using an Edelbrock model #1407, 750 cfm, non-emission four-barrel carburetor to illustrate the basic principles of carburetor operation and adjustment. See Photo 1.

Atmospheric air pressure in the float bowl then pushes fuel through the main metering jet into the negative air pressure in the venturi. Greater fuel metering accuracy and mixing capability is achieved by mounting a “booster” venturi inside the carburetor’s main venturi.

If the main venturi is too large for a particular engine application, the air pressure differential in the venturi will not be sufficient to draw fuel from the carburetor float bowl. The result will be a fuel metering “stumble” caused by inadequate air speed through the carburetor venturi.

At wide-open throttle (WOT), the pressure differential is nearly equalized, but due to the inherent restriction of the carburetor main venturi and booster venturi, the air pressure inside the intake manifold remains slightly less than atmospheric pressure.

The Float System
The carburetor float, float needle valve and needle valve seat assembly maintain the correct fuel level in the fuel bowl. A low float level will cause a mild lean condition while a high float level will cause a mild rich condition due to the relative pressure differentials that the venturi must develop to lift the fuel out of the float bowl.

The Choke System
A choke plate mounted over the primary throttle bores is used to enrich air/fuel ratios for cold starting by restricting air flow into the carburetor. The choke system usually includes a thermostatic coil or hand cable to activate the choke valve, a fast-idle cam on the throttle plate to increase idle speed during engine warm-up, and a
vacuum-activated choke pull-off to open the choke valve a predetermined amount after the engine starts. 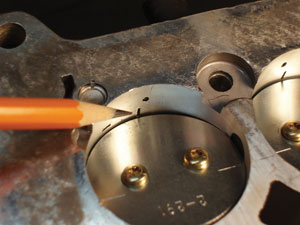 The Six Metering Systems
Air flow through a carburetor venturi changes drastically as the engine accelerates from an idle to a wide-open throttle or peak engine-speed condition. To achieve a nearly “stoichiometric” or chemically perfect 14.7:1 air/fuel ratio, the carburetor must coordinate fuel flow with air flow.

Because the six circuits may overlap each other as the engine accelerates, the actual air/fuel ratio may vary throughout the speed and load range of the engine. In most cases, a carburetor must run slightly richer than “stoich” to avoid lean spots in its fuel delivery curve as it transitions from circuit to circuit.

The Idle, Transition and Accelerator Pump Circuits
The idle circuit consists of two tapered idle mixture adjustment screws that thread into small round ports located under the carburetor’s primary throttle plates. The primary idle circuit draws air and fuel into an emulsion tube, which mixes gasoline drawn through the carburetor’s primary main metering jet with air drawn from an air bleed 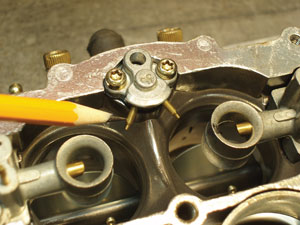 located in upper part of the primary carburetor body or booster venturi.

To achieve a relatively accurate fuel metering curve as the engine accelerates, the volume and duration of fuel 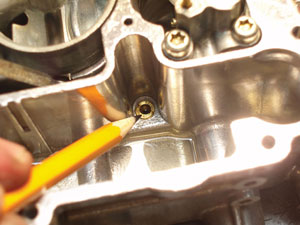 Main Metering and Air Bleed Systems
Creating close to a 14.7:1 stoichiometric or chemically correct air/fuel mixture ratio is a difficult assignment for a mechanically controlled carburetor. But carburetors come very close to creating “stoich” by employing a very sophisticated method of mixing air with fuel before the fuel enters the venturi air stream. 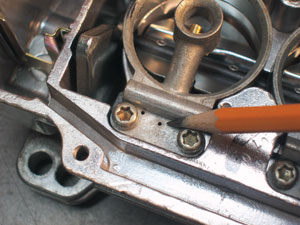 from being siphoned into the venturi air stream. See Photo 5.

Air bleeds perform the additional function of “curving” the air fuel mixture ratio so that the air fuel ratio remains relatively constant throughout the engine’s entire speed and load range. Without air bleeds to dilute the fuel stream with air, the carburetor would tend to run rich at peak engine speeds and loads.

To vary the air/fuel mixture ratio, many carburetors like the Edelbrock 1407 restrict fuel flow during closed-throttle, high manifold-vacuum conditions by inserting a stepped metering rod into the primary main jet. Typically the 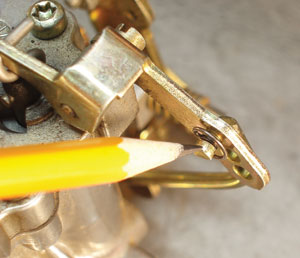 Effects of Manifold Design
Carburetors deliver fuel in the form of small droplets suspended in a moving column of air. After the fuel leaves the booster venturi, the droplets tend to reunite in the form of larger droplets. These fuel droplets also tend to fall to the floor of an intake manifold plenum and to flow around the outside circumference of a curved intake manifold port.

This process of fuel segregating from the air inside the intake manifold is generally known as “wet flow.” 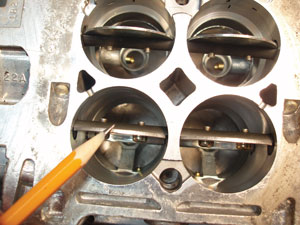 of the intake plenum. Although this added exhaust heat tends to evaporate liquid fuel by heating the plenum floor, it also reduces the volume of the air stream entering the engine’s cylinders. This segregation process is further aggravated by intake ports that are too large for the application and intake ports that have unnecessarily sharp curves in the port wall.

Consequently, it’s important to remember that manifold design controls not only the total air flow into the engine, but the cylinder-to-cylinder fuel distribution as well.

External Adjustments
Most specified thermostatic choke adjustments are accurate at sea level. As operating altitude increases, tension on the thermostatic choke spring must be reduced to accommodate reduced atmospheric pressure. Both the choke spring tension and fast idle speeds should be adjusted on a cold engine in order to produce the best cold-engine driveability.

The idle mixture adjustment consists of lightly seating the two spring-loaded screws located at the base of the carburetor. After seating, the idle mixture screws should initially be adjusted by backing them out two or three turns from their seated position. In general, a tachometer should be used to adjust idle mixtures. 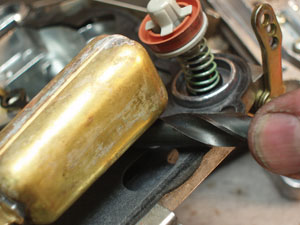 The idle speed screws should be adjusted equally until maximum idle speed is achieved. Keep in mind that, since performance carburetors can’t compensate for intake air temperature, a stoichiometric mixture in a hot shop environment will likely develop into a lean, rough idle condition in a cooler street environment.

Keep in mind that partially opened throttle plates can cause poor cylinder-to-cylinder fuel distribution. Secondary throttle plate vertical position is adjusted at the secondary linkage. Most secondary plates also incorporate a throttle stop to ensure that the plates don’t rotate to an over-centered position. See Photo 7.

Primary and secondary main jetting is very close on a new Edelbrock carburetor. In most cases, the only adjustment required is reducing the main jet size one or two steps to compensate for higher altitudes.