ower or more for everyday driving and towing. While pulling has been the traditional use for diesel-powered tractors and trucks, diesel-powered vehicles are now winning races and setting records in venues that have long been the exclusive realm of gasoline-powered engines.

Did You Know…
A group called the Diesel Hot Rod Association (www.dhraonline.com) has been promoting diesel drag racing at various tracks around the country. Many of the diesel-powered Pro Street trucks at these events are running in the 9-second range at speeds in excess of 140 mph in the quarter mile.
In fact, the fastest diesel pickup truck is currently a twin turbocharged 6.6L Duramax-powered Chevy S10 built by Gale Banks. The Banks Sidewinder S-10 holds the national quarter-mile record at 7.77 seconds with a top speed of 180 miles per hour set earlier this year.
For more on Gale Banks and his performance diesels, visit: www.bankspower.com. 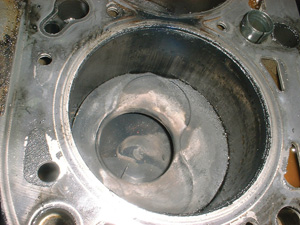 The Diesel Difference
The most obvious difference between a gasoline-powered engine and a diesel is that a diesel has no spark plugs or ignition system. The fuel is ignited by the heat of compression alone. When a diesel piston goes down on its intake stroke, it only draws air into the cylinder.

When the piston comes up on its compression stroke, the fuel is injected into a precombustion chamber or directly into the combustion chamber by a high pressure injector (1,500 psi to as much as 27,500 psi depending on the system). The injection pulse is actually a series of pulses timed to provide maximum power and lowest possible emissions. Residual heat in the cylinder from the last combustion cycle combined with heat generated by compression ignites the fuel.

Photo 1 and Photo 2:  When you tear down a diesel engine and find debris embedded in the tops of the pistons, or dents or dings in the piston crowns, it means the engine ingested some kind of contaminants. It may be the fault of the turbocharger, the intercooler, or a missing or damaged air filter or intake ductwork.

Diesel Piston Design
The combustion chamber in most diesel engines is actually in the top of the piston rather than the cylinder head. There is a bowl-shaped recess that swirls and compresses the air as the piston comes up. This design means the piston will be relatively long and heavy compared to a piston in a gasoline engine. On some light truck diesel engines, the pistons weigh 1,000-1,200 grams with a 300-400 gram wrist pin. But the extra weight doesn’t matter much because a stock diesel engine typically operates at relatively low rpm (under 4,000 rpm). 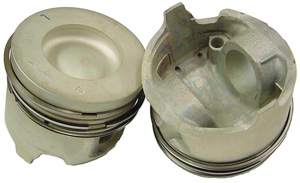 As long as engine speed remains below the design limit of the stock piston, most pistons will hold up fairly well to increased turbocharger boost pressures or even a brief shot of nitrous. But if the engine revs too high, the wrist pin eyelets can be literally pulled out of the piston.

Under Pressure
The pistons in a diesel engine must also withstand significantly higher compression pressures and operating temperatures than those in a gasoline engine. Because of this, the top piston ring runs hot. To reduce top ring pound out, most stock diesel pistons have a steel or iron insert for the top ring groove. This greatly improves the durability of the piston, and also allows the use of a keystone-shaped top ring to minimize ring sticking.

Because the pistons need a top ring groove insert for durability, the pistons must be cast rather than forged. Most use an alloy that contains 11-13% silicon so the pistons will have some ductility. To date, hypereutectic alloys with higher silicon levels have not been used for diesel pistons. 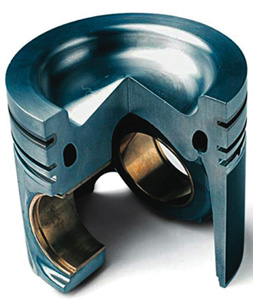 In heavy-duty high output engines, two-piece “articulated” pistons with steel crowns and aluminum skirts are often used for improved durability. The wrist pin holds the two pieces together, and allows the piston to handle higher loads than would be possible with a one-piece cast piston. Some engines also use a one-piece all-steel piston such as Mahle’s “Monotherm” piston or Federal Mogul’s “Monosteel” piston. The steel pistons are extremely durable and can handle the highest loads, but also tend to be heavy and expensive, costing up to three times as much as conventional cast aluminum pistons.

In recent years, diesel pistons with ceramic fiber reinforcement in the bowl rim have also been developed for high load applications. Such pistons were used in the Audi engine that won the Le Mans race. The cast-in fibers increase the load-bearing capacity at the bowl rim, and allow the pistons to withstand extremely high thermal loads without cracking.

Cooling, Coatings and Clearances
Another trick that’s done with many diesel pistons is to use oil jets to help cool the pistons. When an oil jet is directed at the underside of the piston, oil is deflected into the gallery so it circulates behind the rings to carry away heat. This technique lowers the temperature of the top ring up to 100° F or more to improve sealing, reduce blowby and emissions, and to extend the life of the piston and rings.

In performance and marine diesel engines, oil cooling is even more important. On a stock Duramax diesel that squirts 1.2 gallons of oil per minute at each piston, the flow can be doubled by using larger jets and a higher capacity external gear-driven oil pump.

Cooling is improved even more by casting an oil cooling gallery into the top portion of the piston behind the upper ring land to dissipate heat. On some pistons, the cooling duct is created in the back of the top ring insert by welding on a steel plate.

Many stock diesel pistons come with anti-scuff coatings on the side skirts. Aftermarket performance pistons are also available with or without these side coatings, as well as oil-shedding undercoatings to improve cooling, and heat-reflective top coatings to help the pistons run cooler.

According to most of the piston suppliers we interviewed for this article, the jury is still out as to the benefits of insulating top coatings on diesel pistons. All agreed that the anti-scuff side coatings are a good idea for break-in and to protect the pistons and cylinders in the event the engine’s oil supply is disrupted for any reason.

An insulating top coating on a diesel piston can slow heat transfer into the piston to reduce thermal expansion and stress on the piston and top ring. But whether the benefit this provides is worth the extra cost in a given application is open to debate.

If the stock cast pistons in a diesel engine are being replaced with stronger forged pistons, increased piston-to-cylinder clearance may be required. On a stock Duramax, for example, the factory recommends about 0.002” of clearance. With forged pistons, the clearance may have to be opened up to 0.006” or more. It all depends on the forging alloy and the design of the piston (how much taper is machined into the upper part of the piston).

Clearances can also depend on the cylinder’s location in the engine block. The rear cylinders on General Motors 6.5L turbocharged diesel engines from 1994 through 1998 typically run hotter than the rest of the engine’s cylinders because of the rear-mounted turbo and location of the exhaust manifolds. This can lead to cylinder cracking and even piston scuffing in the back cylinders. GM says engine builders should allow 0.0005” of additional piston-to-cylinder clearance on the two rear cylinders for this reason, and some say 0.001” of additional clearance provides an extra margin of safety.

Forged pistons may contain almost no silicon up to 11.5% depending on the alloy. The forging process increases the density of the metal and significantly improves its strength (up to 40% or more over conventional cast pistons). Forging also increases cracking resistance, and may allow a piston to survive a close encounter with a valve without shattering (thus saving the engine). Forged pistons generally run 18-20% cooler than cast pistons, too, which is a plus in high heat or performance applications.

But forged pistons are not the best choice for a street engine because they lack the upper ring insert and cooling gallery that’s necessary for long-term durability. Hard anodizing the upper ring land helps, as does using a steel rectangular-shaped top ring. But these forged diesel pistons are intended primarily for “short run” racing, not your average daily driver pickup truck that may also be used for towing.