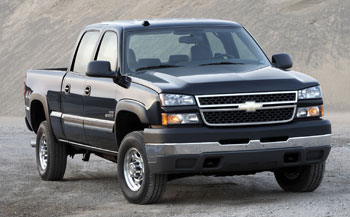 Turbo Improvements
Refinements in 2005 included an overall reduction in exhaust emissions and an increase in torque output, which was enabled by significant hardware changes in 2004. Those changes included a new variable-geometry turbocharger. Self-adjusting turbine vanes and sophisticated electronic controls automatically adjust boost pressure and exhaust backpressure. The vanes direct exhaust gas at the turbocharger’s turbine blades. These vanes can be opened or closed to vary the amount of boost pressure.

An electro-hydraulic device operated with engine oil, similar in concept to a camshaft phaser, adjusts the turbine vane angle. The variable-geometry turbo has its own sensors managed by the engine control module (ECM). A solenoid controls oil pressure against a piston that operates a small cam, which works on a unison ring that moves the turbine vanes simultaneously. As the cam turns, it varies the angle of the blades relative to the turbine wheel.

The crucial advantage: With the moveable blades, boost pressure can be controlled independent of engine speed.
The variable-geometry turbo presents a number of benefits over the conventional fixed-geometry type. Boost can be controlled more precisely, with a greater range of modulation, than with a fixed-blade turbine. The Duramax 6.6L’s turbo eliminates the need for a wastegate, which is often the first turbocharger component to fail as mileage accumulates.

Because the variable-geometry turbo can essentially change resistance and adjust the amount of exhaust backpressure, it also eliminates a separate exhaust pressure regulator, which was previously used to manage engine or compression braking. 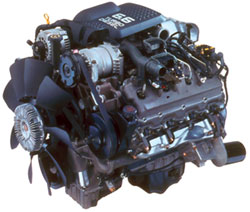 Maximum boost in the Duramax 6.6L remains 20 psi. Yet boost pressure can be varied more subtly over the engine’s rpm range. This presents itself to the customer as more immediate engine response, with virtually no turbo “lag.” Equally important, the ECM measures a number of parameters, from operating temperature to engine speed to fuel injection timing to load demands, when managing the turbine vanes and controlling boost, so the turbocharger operates more efficiently in all conditions.

2006 Improvements
Late in the 2006 model year, structural changes to the block and connecting rods increased the strength of the engine, which allowed calibration changes that increased output for the applications in the Chevrolet Silverado and GMC Sierra pickups.

For the 2006 model year, a new fuel pump increased fuel pressure from 23,000 psi (roughly 300 times greater pressure than the typical gasoline injection system) to 26,000 psi, and the fuel lines and rails have been strengthened for the higher pressure. Also in 2006, the compression ratio was lowered from 17.5:1 to 16.8:1 to improve the operating smoothness of the engine.

As continuing development aimed at lowering diesel emissions progressed, the exhaust gas recirculation (EGR) system was enlarged for the 2006 model year and installed in all Duramax 6.6Ls. The EGR system recycles some exhaust gas back into the intake stream to cool combustion and reduce oxides of nitrogen (NOx) emissions. The Duramax Diesel 6.6L V8 system features a unique cooling process that increases its effectiveness. Hardware required includes: plumbing that carries some exhaust gas from the turbocharger to the intake, an EGR control valve and a stainless steel cooling element. The EGR valve is managed by the E35 ECM.

The EGR cooling element bolts to the right side of the engine, on the inboard side of the cylinder head, with jackets fed by engine coolant. Returned exhaust gas passes through a spiraled passage in the element, and the temperature of the gas is lowered before it returns to the combustion chamber. 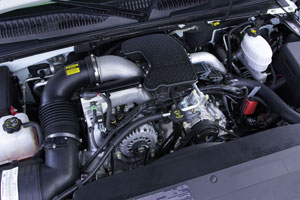 Later Engine Designs
For 2007, the latest version of the Duramax 6.6L is equipped with two-piece rocker covers that accommodate external connections for the fuel lines and new fuel injectors. These resemble conventional rocker covers, but they are split lengthwise along the plane of the top surface of the cylinder head. The lower, rectangular piece of the rocker cover rings the perimeter of the cylinder head and bolts to the head like a conventional cover. The upper portion of the rocker cover attaches to the lower piece.

The new two-piece rocker covers ease access to the fuel rails and injectors. Previously, the rocker covers and then the fuel lines had to be removed in order to reach the fuel injectors. The top piece of the new rocker cover is scalloped on its lower edge, around the point where the injectors fit into the cylinder heads. The injectors are now exposed on the engine, and can be removed with no other disassembly required. Such serviceability considerations are particularly significant in an engine like the Duramax 6.6L, with an anticipated useful life beyond 200,000 miles.

Fast-heating glow plugs reduce pre-start heating time without increasing draw on the battery. The engine’s glow plugs draw 6.6 watts of electricity, as before, but the element has been redesigned to more efficiently convert electricity to heat. Moreover, the glow-plug controller is specifically calibrated for the Duramax 6.6L’s new engine control module and allows pulse width modulation, which manages current more like a rheostat than an on-off switch.

Internal Affairs
The 90° turbodiesel V8 utilizes a compact, rigid cast-iron engine block that features induction-hardened cylinder bores — a technique borrowed from larger diesel engines and exclusive in the pickup class — and four-bolt, crossed-drilled bearing caps. A die-cast aluminum lower crankcase strengthens the engine block and serves as the lower engine cover, keeping weight down. The forged steel crankshaft is surface-hardened by nitriding, and aluminum pistons minimize reciprocating mass and improve efficiency. Each has a small hole cast in its skirt, allowing jets to spray cooling oil through a cast channel and up toward the bottom of the piston bowl, where most heat is generated.

Aluminum cylinder heads deliver strength greater than or equal to cast iron with considerably less weight. The Duramax also has four valves per cylinder — the standard for contemporary luxury-car diesels — and an integrated oil cooler. Several features make it easier to service, which is good news for technicians. Its compact size leaves more space around the engine when it’s installed in the vehicle. The timing gears are at the front of the engine for easy access, and in heavy-duty pickups, technicians can remove the fuel filter simply by leaning into the engine compartment. 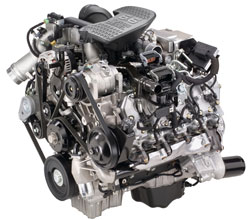 The Duramax 6.6L operates on the direct injection principle which, other things equal, allows more complete combustion than the older style indirect injection and decreases specific fuel consumption as much as 20%. Each high-pressure injector has its own solenoid to manage fuel spray. The latest injectors feature six spray points in each injector tip for better fuel vaporization. The solenoid-type injectors reduce the amount of fuel leakage between pulses. They allow more precise fuel control, with more consistent performance under hot-fuel conditions, and greatly reduce the potential for clogging due to fuel contamination.

The injectors are installed directly into the head and are coded so that the E35 ECM can precisely match the flow characteristics of each injector on a particular engine to compensate for small variations, ensuring exact fuel delivery.

GM Service Solution for the 6.6L
Technicians have reported that some 2001-’04 GM 6.6L diesel vehicle owners comment on engine coolant loss with no visible leaks. They also complain of extreme white smoking.

Damage to this portion of the fuel injector sleeve may indicate a loose injector caused by improper installation or a missing copper washer (see Figure 1).

A loose injector will allow the fuel injector and the injector sleeve to bounce inside of the cylinder head, resulting in coolant leaking into the cylinder. If damage is found, replace the damaged components.