Under the Hood: Plugging Away with Diesel Service -

e has cooled off sufficiently or is cold (typically below 9° C or 48° F), the engine computer turns on the glow plug relay and control module. The module then routes voltage to the glow plugs, causing them to rapidly heat up. On older VW diesel ­engines, just a relay was used to power on the glow plugs (no separate module). 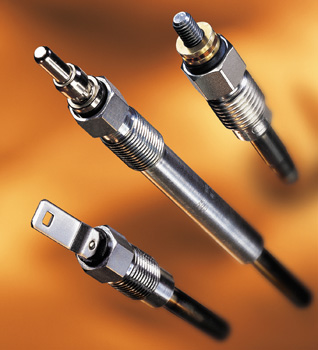 The glow plugs are located in the cylinder head and the tips extend all the way into the combustion chambers in the TDI engine. This allows the heat to be quickly absorbed by the incoming air charge. In the older VW diesel engines with prechamber heads (1.9L and 1.6L), the glow plugs ­extended only into the prechambers and are just below the fuel injector.

This setup takes more heat because much of the heat is absorbed by the prechamber itself. Eliminating the prechambers and extending the glow plugs into the combustion chamber significantly reduces the warm-up time, and also allows the glow plugs to continue to assist the ignition process after the engine starts and is warming up.

On the latest generation of VW TDI diesel ­engines, the glow plugs remain on for up to four minutes after the engine starts to smooth the idle, and reduce noise and hydrocarbon emissions. Exhaust emissions are highest following a cold start, so keeping the glow plugs on during a “post-glow” period allows the engine to meet lower emission standards.

In this respect, the glow plugs act almost like spark plugs to keep the fire lit until the engine’s temperature stabilizes and emissions taper off. If engine speed goes above 2,500 rpm during the warm-up period following a cold start, the computer will shut off the glow plugs. 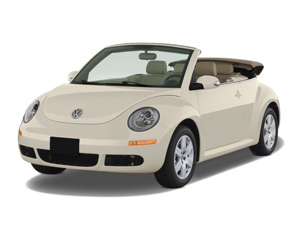 The latest VW glow plugs are made of more durable materials, and are ­designed for a longer service life. On the Bosch glow plugs, the tube that extends into the combustion chamber is made of Inconel 601 steel, which is highly corrosion resistant.

A pair of high-temperature Viton seals are used to seal the tube and internal heating coil to the gas-tight tube, and a ceramic powder is used inside the tube to provide good thermal conductivity. The glow plugs are designed to last upward of 100,000 miles, and most do — but some do not.

Did You Know…
When glow plugs fail, the heating element inside typically burns out and goes open. Testing the glow plug with an ohmmeter (with the wiring harness disconnected and power off) will show if the plug has any resistance.
Zero resistance would tell you the glow plug has burned out and needs to be replaced. A good glow plug should have a resistance between 0.5 to 1.0 ohms.


Problem Plugs
If the glow plug system is not working correctly, the most common symptom is typically hard cold starting, which may be accompanied by a rough cold and/or white smoke (unburned fuel vapor) in the exhaust. Just remember that these same symptoms can also be caused by other things such as incorrect injector timing, worn or clogged fuel injectors, or poor fuel quality during cold weather. 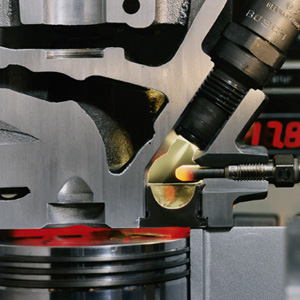 On the newer VWs, the onboard diagnostic system monitors the operation of the glow plug system, and may set one or more fault codes if a problem is detected.

On the older VW prechamber non-TDI diesel engines, a problem in the glow plug system will often set a P0380 fault code. Unfortunately, there are no additional codes on these applications to help you figure out where the problem is, or which glow plug may be at fault. On the newer diesels, the diagnostics is better.

Glow Plug ‘Tips’
In rare instances, a glow plug may short to ground when it fails. Because the glow plug circuit is a high-amperage circuit, a shorted glow plug will overload the circuit and may cause the fuse (or fusible link on older VWs) to blow.

Here’s a tech tip from the www.TDIclub.com website: If the check engine light comes on approximately 30 seconds after starting the engine (and there are no obvious driveability problems other than hard starting), the cause may be a bad glow plug or a fault in the glow plug circuit.

Also, check the main glow plug fuse (it’s visible under a small clear plastic cover in the engine compartment usually near the battery or firewall). If the fuse is okay, and the glow plugs pass a resistance check, the most likely problem would be a poor electrical connection between the harness and the glow plugs. Remove the glow plug connectors and clean the contacts, or replace the harness.

Another way to quick-check the glow plugs without having to use a voltmeter or ohmmeter is to use an infrared thermometer (Note: This works only on a cold engine). Cycle the ignition on and off a couple of times to heat up the glow plugs. Then aim the ­infrared thermometer at each glow plug so see if all the plugs are generating heat. If you find a cold plug that isn’t heating up, the glow plug or wiring connector is bad and needs to be replaced.

Popping In Plugs
The worst thing that can happen when a glow plug burns out is for the tip to break off inside the engine. The tight clearances in the combustion chamber don’t allow any room for chunks of metal to bounce around. This may damage the piston, valves or cylinder head.

Sometimes the tip of a glow plug will mushroom when it fails, making it nearly impossible to remove.  Replacement may require removing the cylinder head and drilling out the glow plug. Thread repairs may also be required depending on what’s needed to extract the old plug.

In most instances, the glow plugs can be changed just like a spark plug. Use a deep well socket to ­unscrew the old glow plugs and to install the new ones. Be careful not to overtighten the glow plugs or you may damage the glow plug or strip the threads in the cylinder head.

Thread the glow plug in by hand, turn it a couple of times to make sure the threads are aligned properly, then hand-tighten to the recommended torque (15 Nm or 11 ft.-lbs.). The threads on the glow plug can be lightly coated with anti-seize to make future replacement easier.

Also, compare the old and new glow plugs before you install the new ones to make sure they are the same length. If the replacement plugs are too short on a TDI engine, they won’t extend into the combustion chamber to provide adequate heat. And if they are too long, they may hit something.

Weird Stuff
If the glow plug indicator light on a TDI diesel flashes while driving, it doesn’t indicate a fault with the glow plug system. For some reason, VW decided to use the glow plug light as a “bulb out” indicator lamp if a brake light has burned out. A bad brake light switch can also cause the same thing to happen. Wouldn’t it have been less confusing to warn the driver with a “lamp out” light or icon? Go figure.

The vehicle owner may also complain of clicking noises coming from the vicinity of the glow plug relay located in the fuse panel near the base of the steering column. The noise is from the relay switching on and off as supplemental heat is used during engine warm up to reduce emissions. The high current drawn by the glow plugs may also cause the lights to dim slightly when the relay clicks on.

But don’t worry, VW says this is normal.