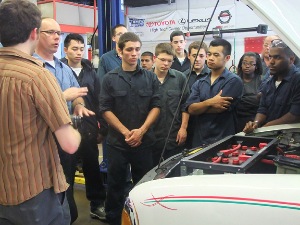 As part of their class project, seniors at the Scotch Plains campus converted a gasoline powered Chevrolet S-10 pickup truck into a fully electric-powered vehicle.

According to course instructor Gregg Force, the process took more than six months. The project began in October and ended in late March.

The electric-powered pickup has zero tailpipe emissions and can be charged by plugging into a standard household outlet. Force said that the students used an electric drive train and battery system provided by Electric Auto Shop, Inc., a company that specializes in curriculum materials that train students in electric-vehicle technology. 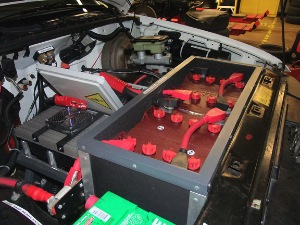 Force said Union County Vocational Technical is one of only a handful of high schools in the country that offers electric-vehicle technology as part of students’ hands-on curriculum. He said funding for the program came from a federal Perkins Grant.

To administer the power conversion, Force said the students first reworked the suspension and converted the truck’s standard bed into a tilt bed.

Next, gasoline-powered accessories – including the cooling system, exhaust system and fuel system – were removed.

Finally, the S-10 was fitted with an electric DC motor and an on-board charger. 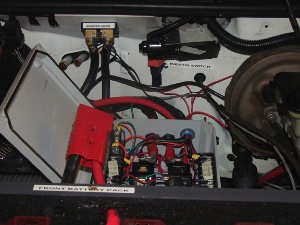 The vehicle easily runs all 12-volt vehicle accessories, including the lights, horn, wipers, radio, and heater. It uses a DC-to-DC converter that takes 144 volts from the big battery pack and reduces it 12, allowing for the charging of the 12-volt batteries.

While the truck’s vacuum-powered brake system is unaffected by the change, the air conditioning system was not part of the switchover.

The instructor said that the truck basically drives like a golf cart. Included in the design is a safety-inertia switch, which means if the vehicle is in an accident, the power gets cut off.

The vehicle — donated from General Motors (GM) around 1995 — cannot be driven on public roads because the VIN has been wiped.

However, Force said the school intends on using the truck on private property around campus, to demonstrate its viability to the community and with the goal of encouraging more widespread use of electric vehicles. 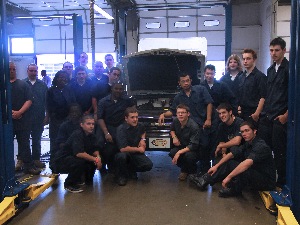 Force called the project “a good hands-on teaching tool" and said if given the opportunity, he would like a future Vo-Tech class to create another electric vehicle conversion.