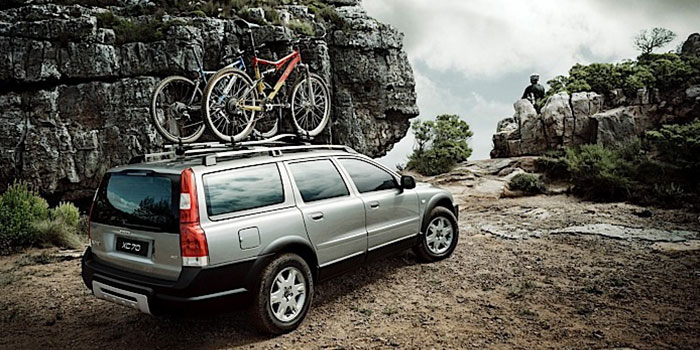 When I started driving way back in 1977, it seemed like you had to buy a truck to get a 4WD vehicle. Actually, the first 4WD car was built a long time ago in 1903 by the Spijker brothers. The first commonly produced 4WD car was built by Subaru around 1974, with the AMC ­Eagle and Audi Quattro joining the party around 1980. Volvo came out with its all-wheel drive (AWD) ­vehicle in 1997. It worked pretty well, but if you didn’t ­rotate your tires and ­decided to ­install just two new tires, the size ­difference between the new tires and old tires was enough to chew up the differential. It was recommended that if you had a tire ­problem and needed just one tire, that you ­replace them all.

Volvo used that ­viscous coupler setup until about 2002, and then started using a Haldex clutch system that was much more forgiving if the tires weren’t exactly matched. The newer Active On Demand (AOD) system, with the next generation Haldex clutch system, works ­really well, but it is not without its problems.

One of the first problems we started seeing in Volvo’s early cars was failure of the coupling sleeve between the transmission and the angle gear, which sends power to the rear wheel (see Photo 1). The customer would complain of poor traction, and if the car was put up on a rack, the driveshaft to the rear differential wouldn’t spin. The splines inside the coupling sleeve would wear, and then the sleeve would fail (see Photo 2) and power would not be transferred into the angle gear. If you were to pull the angle gear and replace the coupler, you were usually good to go.

Volvo made a kit with the sleeve, seals and ­instructions on how to reseal the angle gear unit. We didn’t see many problems with the ­viscous couplers, but when Volvo went to the Active On Demand units, several problems started to arise. Let’s take a look at the problems we’ve encountered and how to diagnose the different types of failures.

Digging in to the 2006 Volvo XC70 with Active On Demand

The car we are using is a 2006 Volvo XC70 with Active On Demand Coupling.

1. The first step is to connect a Vida or equivalent scan tool to see if you can communicate with the Differential Electronics Module (DEM). If you can, read the codes and ­follow the diagnostic flow chart. Xemodex has several good flow charts for Volvos, including some for diagnosing the different AWD systems. Log on to ­xemodex.com/us and click on technical resources, then on to ­diagnostic flow charts for help.

Note: There are a couple of problems that will set codes in the DEM, and we will discuss the one that brought our 2006 Volvo XC70 into our shop in just a minute.

2. If you can’t communicate with the DEM, go to the Rear Electronics Module (REM) located in the left rear of the vehicle (see Photo 3) and check for power at fuse #23 (see Photo 4 and Photo 5). We have seen several REMs with internal faults, and they don’t supply power to fuse #23 for the DEM.

3. If there is no power, the REM will need to be ­replaced or repaired. Note that if you install a new REM, it will need to be programmed. Keep in mind that there are several rebuilders who can repair these units, and a ­repaired unit will not need ­programming.

4. If you cannot communicate with the DEM, but do have power at fuse #23 of the REM, unplug the large connector at the DEM. With the key on, check for voltage across pins 1 and 2.

5. If there is power and ground, the DEM is faulty and needs to be repaired or replaced. Like the REM, a new DEM will need to be programmed, but a repaired one will not.

6. Our car had a code P188914 stored for oil pressure pump performance. We are ­communicating with the DEM, so we’ll check the smaller 2-pin plug that goes to the oil pump.

7. If there is no power coming out of the DEM and going to the pump, replace the pressure switch in the DEM and see if the pump works.

9. To get the pump out of the housing, the companion flange on the Active On Demand Coupling unit has to be removed. We always mark the driveshaft and flange before we take it apart (see ­Photos 6 and 7).

10. Once the flange on the Volvo Active On Demand unit is out of the way, ­remove the two bolts and then remove the pump. Now would also be a good time to change the Haldex oil filter and fluid. The filter is under the cover, right next to the pump.

11. Install the new pump. Then, install and torque the companion flange and reconnect the driveshaft.

12. Fill the Active On Demand unit with Volvo Haldex oil (see Photo 8). It takes a whopping 300 ml, and then you’re ready to test the AWD function. These systems aren’t very complicated once you understand how the power flows from the REM through the DEM and into the oil pump.

There are a lot of Volvos on the road, and the same-year vehicles all share the same AWD systems. Whether you’re confronted with a S60, a S80 or one of the XC70s or XC90s, you should be able to fix them all once you get comfortable. So, the next time a customer comes in and asks if you can fix their AWD system, the answer should be a confident “yes.”