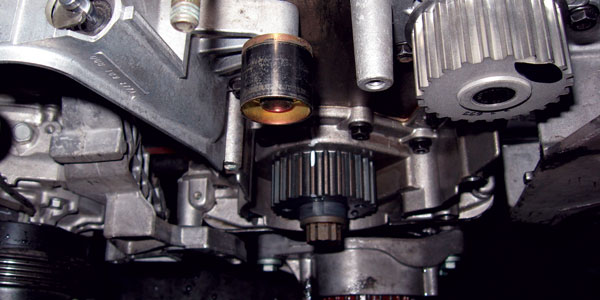 A quick look at the list of VW and Audi engine codes will make your head spin. Before starting any repair, you should know the ­engine code, production date and country of origin.

A quick look at the list of VW and Audi engine codes will make your head spin. Before starting any repair, you should know the ­engine code, production date and country of origin.

The focus of this article will be the VW four-cylinder 1.8L and 2.0L five-valve engines that power everything from New Beetles to midsize VW and Audi sedans. With a free-winding horsepower curve and smoothness that is uncommon in a four-cylinder, it is easy to forget that the car is powered by an engine that is only half the displacement of cars that are more performance oriented.

Starting with the New Beetle, the biggest changes came by way of dual-overhead camshafts and turbocharging, along with five valves per cylinder. Since 1998, this engine has ­become the performance upgrade or standard equipment for VW and Audi base-model cars.

As with many new designs, changes were made almost immediately to many components (see Photo 1). A number of components were revised without regard for model year or production location.

A quick look at the list of VW and Audi engine codes will make your head spin. Before starting any repair, you should know the ­engine code (see Photo 2), production date and country of origin. Though some of these engines in long-block form or cylinder head design are interchangeable, it is best to consult a machine shop specializing in these engines before attempting a code change.

In the U.S., these engines are turbocharged and ­intercooled. Maintenance mistakes and neglect are the most common reasons for failure of the engine, turbocharger, or both. Leaks of all kinds have been common. Coolant leaks at the oil cooler, mounted on the filter adaptor (see Photo 3) and water pump, are common.

Since VW doesn’t specify a clear change interval for the timing belt on these engines (only vague references are given about inspection and replacement, if necessary), we see these cars with relatively high mileage come in without belt replacement. The rotational demands of a single belt turning two camshafts, a timing chain against hydraulic tension and 20 valve springs should be a clue that Murphy would be ­invoked earlier rather than later.

Case in point is the subject of some of the photos used in this article. A 2003 New Beetle Convertible with 89,000 miles had almost made it to the top of the hill our shop is located on (two miles of steep climb from 20 ft. to nearly 500 ft. in elevation). Since there was a small amount of ice and snow on the road, the slipping and gripping of the tires probably just snapped the belt as the tires grabbed (see Photo 4).

The damage was obvious, as the engine had no compression when cranked. As a second-owner vehicle, it was out of warranty. A call to the owner’s ­insurance company indicated that the damage would be covered, but after removing the valve cover to verify the damage, the cost of the repair exceeded the ­allowed coverage.

Rather than go into a step-by-step repair process in this article (the appropriate service manual or online repair information should be available to do this job properly), I will instead focus on things to look out for in the repair process.

1. There are some obvious things to take into ­account before any disassembly. Since space is at a premium in both engine layouts, either the radiator carrier (see Photo 5) needs to be moved forward, or the right-side engine mounts need to be removed to ­access the front of the engine to ­replace the timing belt. Depending on the year and engine code, there will be one, or as many as three, accessory belts and respective pulleys to remove. Other obvious things to do include draining the coolant and oil and removing the air filter, housing and intake connections.

2. Depending on the year and code, remove the plastic engine covers, top and bottom. On most of these cars, the intake manifolds can be unbolted after removing electrical harnesses and brackets, leaving the injectors in place and simply pulled out of the way and secured to allow the head to come off. There are a lot of vacuum hoses, secondary air hoses and breather connections (see Photo 6), so take your time to disconnect and save as many as possible.

3. The rear of the engine (flywheel end) will be a challenge as there are connections for coolant, EGR/secondary air and vacuum tightly grouped and hidden.

4. The exhaust manifold can be removed without removing the turbocharger. Though some of the fasteners have tight clearances, with patience (use a slight tighten then quick break to loosen the fasteners) and the correct wrench, the various brackets can be moved out of the way. On New Beetle and TT models, remove the turbo heat socks and carefully work the boots loose, as they will probably be brittle and tear easily.

5. You will need the special socket for the cylinder head bolts (poly drive) to work around the camshafts and lifters; the best ones are several inches long. ­Depending on the type of tensioner, a holder (grenade pin or flat bar-type) will be needed during reassembly. If the timing belt was broken or stripped of teeth, there is no compelling need to set the engine to TDC at this point (it’s too late). After removing the head bolts, pull the head with the camshafts and other components in place.

1. Bent valves will be obvious (see Photo 7). You will also be able to figure out where they hit the pistons (see Photo 8). Take time to turn the crankshaft to TDC for each pair of cylinders and check for evidence of a bent connecting rod. Better to find it now rather than after the new head is on.

It’s more important to check the position of the crankshaft timing marks (front or rear) in relation to TDC (see Photo 9). If there is any obvious sign that the marks don’t line up, plan to pull the crankshaft sprocket to see that it is still keyed to the crankshaft once the front covers and belt are off.

2. After removing the front covers, pull the water pump off for inspection if it is the type driven by the timing belt. Since these pumps fail often (even before the timing belt), they should be replaced any time the belt is replaced. I would recommend a pump with a metal impeller for a lasting repair. A close look at the pumps with plastic impellers will usually show tiny cracks near the shaft from the pressing process, even when they’re new.

3. Cleanup of the block is important for the new head gasket to seal properly since it is a multi-layer steel embossed-type and the sealing surfaces have to be clean, dry and flat to seal properly. Do not use any kind of sealer on the gasket, head or block surface.

4. At this point, I would set the replacement head next to the old head (see Photo 10) and do a visual crosscheck of ports, mounting tabs, drilled holes, plugs, number of valves and camshaft components to verify the interchangeability of the heads. If you are reusing the head after machine work, make sure you have carefully laid out the removed components (sensors, tensioners, studs and housings), and cleaned up any dirty or damaged threads.

Refer to a repair manual and remove the camshafts, sensors and chain tensioner, and keep everything in order to be sure the parts are reassembled correctly. You should be able to read all of the camshaft cap markings from the intake side of the head. Pay close attention to the dowel pin sleeves. Transfer or remove missing parts and remove duplicates.

1. Before reassembly, there are some steps you should take to prevent immediate failure of the camshafts and valves. I put the lifters in an oil bath and use a socket extension to purge them of as much air as possible. This takes a little time, but does reduce the death rattle on startup that ­always makes me cringe.

2. Read through the assembly ­instructions in a service manual or online to familiarize yourself with the proper sequence and tightening torque for the camshafts. The delicate castings for the camshaft caps are very easy to break or distort, and the bearing surfaces need to be lubricated with oil or assembly fluid during installation.

The chain tensioner housing and front double bearing cap need to be coated with sealant, along with the special sealing gasket at the tensioner that is positioned with a dowel sleeve. Do not use silicone sealer for these surfaces, but instead use the special VW sealant or a similar ­alternative made for sealing machined surfaces. The tightening torque for bearing caps and housings is only 7 ft.-lbs. (10 Nm), so use a torque wrench capable of measuring that low. More torque could pull threads out of the head, again causing premature failure.

3. Set the crankshaft at TDC for cylinder one, then turn the engine backward just enough to allow space in all cylinders for any valves that might be open during reassembly. Clean the head surface of any oil from the lifter installation and clean the mating surface of the block before setting the new head gasket in place.

4. Double-check your chain and cam alignment and then reassemble the engine in the reverse order of disassembly. Before the engine is cranked, turn the engine over by hand at least two full turns to verify correct timing, and precharge the oil system to prevent a dry start.

Advertisement
In this article:Timing Belts, VW