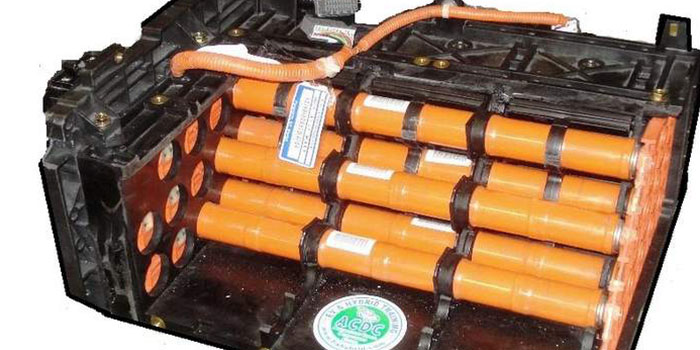 The nickel metal hydride (NiMH) battery is the best and most common hybrid battery so far, and the sheer volume of them is staggering. NiHM batteries have been in use for well over 15 years, and out of the more than 7 million hybrid cars on the road worldwide, 90% have NiMH battery packs.

A NiMH battery left at 100% state of charge (SOC) will discharge at a faster rate than one at 40% SOC.

The nickel metal hydride (NiMH) battery is the best and most common hybrid battery so far, and the sheer volume of them is staggering. NiHM batteries have been in use for well over 15 years, and out of the more than 7 million hybrid cars on the road worldwide, 90% have NiMH battery packs.

Then, consider the cells. Older Honda Insights and Civics had 120 cells per battery pack, and the Ford Escape had 250. Toyota is in the mid-range with about 168 cells in a 2005 Prius, 228 for 2001 Prius, and others falling somewhere in between.

So, if we use 200 cells as an average per pack. For every 1 million hybrids, there are 200 million individual NiMH cells. Multiply that by seven, and the world has a supply of 1.4 billion cells in use. And we are adding over 250 million cells per year.

Hybrid car batteries consist of many cells that are connected in series and packed into a container (plastic or metal). These are called modules, cassettes or sticks depending on the manufacturer. Many modules are packaged into “packs,” and many subsystems support the pack. Cooling, heating, voltage and amperage management, high voltage leak detection and relays are added to ensure a long, safe life.

Used Battery Packs — What To Do?

What should customers do when a battery pack has seen the end of its life? Should they buy a new hybrid and move on? Maybe. Get it fixed at dealership? Sure, if it is under warranty, otherwise the customer will pay a premium because the battery pack is the most expensive part on the vehicle.

What about the local shop down the street? This is the dilemma: The local, friendly shop may not know what to do or — worst yet — may be afraid of the high voltage system and will send the customer elsewhere.

So what do you do with a used NiMH? A lot has changed if you haven’t kept up with “what’s new.” Dorman Products bought a battery rebuilding company named Re-InVolt Technologies a few years ago, and other well-known companies are getting into the aftermarket hybrid parts business. These companies and some recycling companies are buying up the cores, and they are valuable enough for these companies to turn a profit. 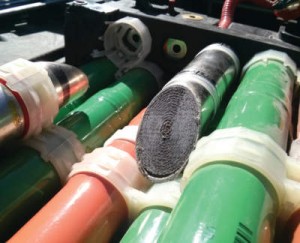 The inside core of a hybrid battery cell.

There is a new trend of “reconditioning” a worn out pack. This is a relatively new process offered by a few independent repair shops. ACDC, my company, has been asked about this many times. We started teaching “reconditioning” in 2003, a few years before Re-InVolt had reconditioned batteries for sale. Re-InVolt, started by David Taylor, started hybrid training with ACDC, and we have watched him grow.

In 2006, we started to dig deeper into battery problems because the 2001 Prius was having issues with the NiMH pack and dealerships were the only route. Used packs, of course, had the same problems. Many students (shop owners and techs) had some great ideas, but it was David Taylor that did the work and came up with a workable solution.

We still teach the theory and have $14,000 worth of Midtronics equipment to use during a 6-day-long Hybrid-EV training, but by the end of the class, some students realize that the success rate is poor and a three-year warranty from a battery supplier might make more business sense.

Consider this: a remanufactured HV battery was a salvage yard part to start with. The reman company has thousands of modules (grouping of 4-8 cells typically) to choose from as they buy up hundreds of cores. In simple terms, you need a lot of modules to make the process work. 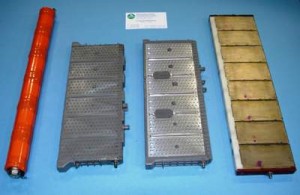 Cells can be packaged round or flat.

Here is the process that a remanufactured NiMH pack should go through:

Step one: Physically inspect the used parts and separate the good from and bad, as in any re-manufacturing process.
Step two: Initiate a proprietary stress test to find the weak cell(s). Step three: Once we have established the good modules, the modules must be “matched.” Some packs have 12 modules or as many as 40.

Think about fuel injectors for a minute. A new injector replaced in a car with seven original injectors most often flows more or less fuel than the other 7. Without “matched” injectors, the fuel flows at different rates and problems occur. Electrons must flow as well, so matching the modules is key to keeping the hybrid light off. Each used module has a different cycle life. The battery ECU will pick up an unmatched module after a road test, so this is risky business unless you have access to hundreds of used modules.

Step four: Assembling and replacing any other parts that are not acceptable, like bus bars, fasteners, etc.

Will shops try fixing a pack with one bad cell? Of course, but maybe only once. Will the used / rebuilt / reconditioned pack last? A great question, and by now you know the answer: Maybe.

Advertisement
In this article:hybrid battery, Hybrids

What To Do With Used Hybrid Batteries