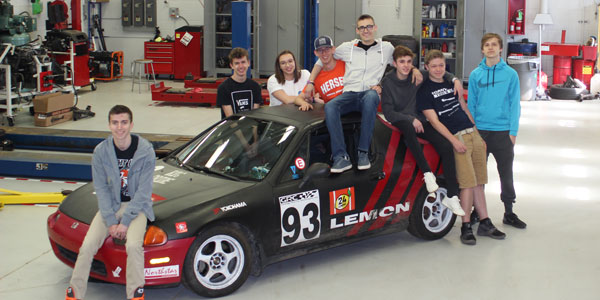 Think you need to modify a fancy race car to get racing experience? Think again.

24 Hours of Lemons is an endurance car racing series dedicated to racing $500 cars on road courses. It all started with the clever name. The idea was officially born when the founder of the 24 Hours of Lemons, Jay Lamm, bet his friend and organizer for the California Mille – a road rally for high-dollar vintage cars – that a $500 car could keep up.

“Jay proposed that a $500 Toyota could do 500 miles with fewer problems than the multimillion-dollar exotics on the Mille,” says Nick Pon, associate perpetrator (yes, that’s his real title) for 24 Hours of Lemons. “And the Double 500 – a 500-mile road rally for $500 cars – was born. Turns out that $500 Toyota could do 500 miles pretty easily, so we upped the ante and put the same idea on the racetrack.”

“Since then, the goal has evolved to create a place where both casual car enthusiasts and experienced drivers can enjoy fairly low-stakes wheel-to-wheel racing,” adds Pon. “Lemons hopefully provides the fun of ‘real’ racing without the high cost, licensing requirements, and serious attitudes.”

Hersey Automotive Instructor Jim Van Bladel started the school’s Lemons journey when he purchased a 1993 Honda Del Sol in 2018 for a mere $300. The car had a blown head gasket and had been sitting in a backyard next to a barn for about three years.

The students got to work and replaced the head gasket, water pump and timing kit with cheap parts found on Amazon. To adhere to safety standards set by the race, they also put in a roll cage and installed a racing seat and harness.

The students also installed the quick disconnect steering wheel. Under the car they went through and replaced the front pads and rotors as well as the rear drums and bled the system. Everything on the car was completely stock in the beginning.

The first race at the Autobahn Country Club in April 2018 was a learning experience. At first, nothing was going right. April showers and bad driving full of spinning and penalties posed a challenge. But, on the second day, they took home a win.

“I’m a huge motor sport fan, especially with Formula One. So being able to work on a race car and going and watching it race is just insane for me. It just made me so happy,” says auto student Colin McElmeel.

The team used a 2nd generation DSM t25 turbo charger fitted to an exhaust manifold made for another turbo by hacking off the flange and welding on a different one. The students mounted an OE 1st generation DSM sidemount intercooler into the fender and drilled a hole in the bumper for air flow.

“Everything lined up surprisingly well. With the turbo setup, the car made 170whp and 185 wtq, more than doubling the factory HP the 1.5l SOHC Honda motor made in ’93,” Van Bladel adds.

With the car ready to race with more power under the hood, the students gave the car a new look inspired by the 90s Honda race cars. Paying homage to the Yokohama Advan, they measured and masked the car using a picture from the internet and painted the car.

Auto and graphic arts students Adrian Florek and Cassy Thiel created all of the graphics on the car.

“The part that I probably enjoyed the most was just seeing the car go through all those different stages after seeing where it came from,” says auto student Adrian Florek.

After a race in November 2018, the students got back to work after the car started to croak in the last 13 minutes of a more than 15 hour race. The vibrations from the exhaust tore the collector on the header in two, dropping the turbo and down pipe onto the race track. It was only being held up by the oil line.

In under a week the students had everything gutted and spent the next month fixing an already cobbled together header, making a new down pipe, and adding extra support for the exhaust as well as a flex pipe. They also found two broken coil springs and three leaking dampers.

A rule update for the 2019 Lemon season also prompted the students to install a fire suppression system with nozzles pointing both at the driver as well as common fire points under the hood. They ran one at the fuel rail and the other at the turbo oil feed line.

“It really gave us the opportunity to work in different parts of the car so one day we will be doing engines and then the next day we’d do full custom exhaust and fire suppression systems. It’s cool because it allows us to work on different race car things that you don’t get to do working on the cars in the shop,” says auto student Ryan Buch.

Once A Lemon, Always A Lemon

And then, the motor died. As if nothing else could go wrong, four laps into an April 2019 race the connecting rod of cylinder 2 punched a hole in the oil pan on the main straight with a dramatic bang and cloud of smoke.

“The positive part of that event was Colin, Cassy, and Ryan all volunteered to work with Lemons of Love, a local charity that builds and sends care packages to pediatric cancer patients undergoing chemotherapy and creates support groups for adults going though and after treatment,” says Van Bladel. “They spent the weekend collecting donations and doing what needed to be done for the charity staff. They got to walk up and down the pits to see all of the carnage and it was the first time any of them had ever been to a race track.”

The motor wasn’t salvageable after that race so the team found a junkyard motor from a Honda CR-V and swapped the engines in less than a week.

As for the car today? It’s still a hunk of junk. With a few more races under it belts and a lot more repairs, the car is forever a work in progress.

“Seeing what it’s become now has been really interesting and being able to be a part of that is special,” says auto student Cassy Thiel. “I’ve learned so much helping out on this project, and I can’t wait to continue working on my own projects in the future. I enjoyed doing this a lot, so I hope to participate in my own road race events in the future.”