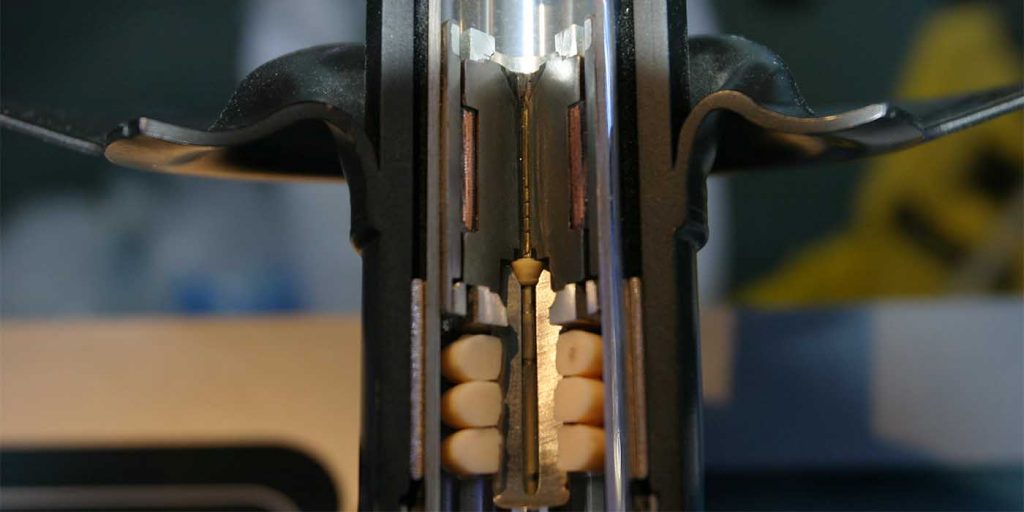 In the 1990s, adjustable valve shocks and struts were all the rage (yes, we actually said that in the ‘90s). These systems had two or three comfort and sport settings that could be changed with buttons on the dash. They also played the role of firming up the suspension if the driver wanted a sporty feel while driving. Adjustable valve shocks and struts have since evolved to the point where they can actively change dampening characteristics in milliseconds.

Active dampening or suspension control systems can be found on luxury Asian and European vehicles. But, some of the larger mainstream SUVs and minivans augment the stability control system, as some of these systems work in conjunction with air ride.

These systems usually go unnoticed until there is a problem or when a message is sent to the instrument cluster, indicating there is a fault with the system. Swapping parts on these systems and using guesswork to diagnose a problem will usually result in an angry customer and an annoyed parts supplier. The key to servicing these systems is proper information and understanding precisely how these systems operate.

On old, electronically adjustable systems, there was typically a small stepper motor on top or on the side of the shock or strut that changed the size of the orifices in the piston or at the base. The compression and rebound were not independently adjustable.

Most new systems use coils and/or magnets to adjust rebound and compression in real time, which are sometimes called actuators or pulse motors. The internal components are non-serviceable. But, on some units, the pulse motor or actuator is serviceable. Do not replace an actuator in the hope of resolving an issue. Take the time to check the actuator and the connector with a meter to see if there is an open or short circuit, or if the signal voltage is present.

When the valves are actuated, the orifice changes size to control fluid flow under a variety of conditions including bumps or body roll. MagnaRide units used on Land Rover, Acura and other import models use electricity to change the viscosity of the fluid. MagnaRide has no mechanical valves or small moving parts that can wear out (but the seals can go bad).

The dampers are filled with magnetorheological fluid, a mixture of easily magnetized iron particles in a synthetic hydrocarbon oil. In each of the monotube dampers is a piston containing two electromagnetic coils and two small fluid passages through the piston. The electromagnets are able to create a variable magnetic field across the fluid passages.

Just like normal shocks and struts, they can develop leaks around the shaft seal, and the piston seal can wear. But physical damage is the main destroyer of active dampeners.

And, like conventional shocks and struts, the springs and bushings must be in good condition for the unit to perform to its full potential.

Most electronic suspension control systems with active dampeners independently control the four units in order to change the vehicle’s ride characteristics and overall stability. Most active ride control systems have their own module that might also control the air ride system. This module will reside on one of the higher speed serial data buses so it can work with the stability control module.

Systems need information like vehicle speed, steering angle and readings from the yaw and accelerometer to measure the spring mass. The stability control module typically shares this information over a serial data network.

If there is an issue with the network and the modules can’t communicate, you may have codes from the ride control system along with communication codes. And, your scan tool might not be able to see or talk to the modules.

For an electronically controlled active damping system to work, it must be able to read the road. Most systems use a Hall effect sensor that measures suspension displacement. Some more advanced systems use accelerometers mounted on top of the strut or shock tower, often known as vertical G sensors.

These sensors can help the system interpret body motion and bumps and translate them into changes in the dampening. The sensors and other information can determine if the suspension movement is just the body leaning, or is the result of the vehicle hitting a pothole.

It is up to the control module to analyze and filter the information to determine the proper dampener setting in real time. Like all modern automotive systems, these sensors can fail, set codes and will require calibration if replaced.

The most common complaint from customers who are experiencing active ride control issues is nose-dive during braking. Some may notice a harsh ride. But a warning message is what will bring them into the shop.

The problem with most systems is that the modules do not have set monitors that can set and produce hard codes. The system will clear the code on the next key cycle, or after the vehicle has been turned off after a specific amount of time. However, the light will stay on if a sensor or actuator is open, shorted or out of range.

There are aftermarket replacement options for active ride control units as well as sensors and modules. If the value of the vehicle does not warrant the cost of an expensive repair, passive units are also available.

The GM full-sized SUVs (Tahoe, Escalade and Avalanche) are the choice of soccer moms, diplomats and celebrities. What made these vehicles so popular was how the vehicles handle suburban and city roads. The key to this is the GM Autoride rear air suspension.

The ESC module has the ability to store DTCs as current or history codes. The system uses an ignition cycling diagnostic approach in order to reduce the occurrence of false or intermittent DTCs that do not affect the functionality of the system. This allows for the fail-soft actions to be taken whenever a malfunction condition is current, but requires the malfunction to be current for a certain number of ignition cycles before the corresponding malfunction code and message will be stored or displayed. The Automatic Level Control (ALC) system maintains a desired rear suspension position under all types of towing, hauling and loading conditions. The system uses the Electronic Suspension Control Module (ESCM) and the serial data circuit to perform the system functions. When the vehicle is unloaded, the rear suspension is at a desired position, which is monitored by the ESCM using the position sensor inputs. As weight is added to the rear of the vehicle, the position sensor’s signal voltage inputs change.

The system also performs a self-test on each ignition ON cycle in which the ESCM commands the ELC relay ON, activating the compressor for 4 seconds, then monitors the position sensor’s signal voltage inputs to verify the compressor is functioning and the system is holding air pressure.