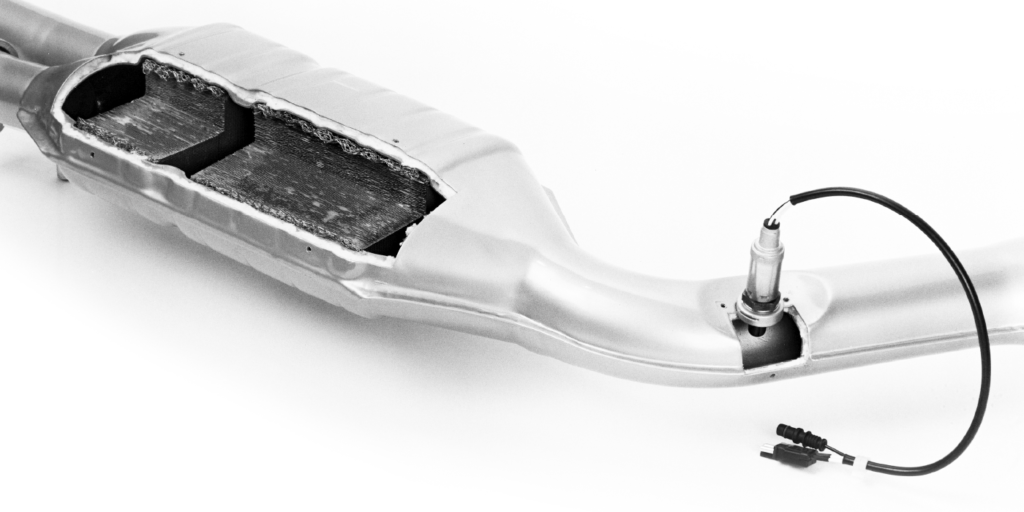 No matter if it is a traditional oxygen sensor or air/fuel ratio sensor it measures the difference in oxygen levels between the outside air and the exhaust gases. By knowing the amount of oxygen in the exhaust gases, the engine management can control the amount of fuel injected into the engine for the best possible power, efficiency and emissions.

This is not a perfect process. The engine management module is always hunting for the best injector opening time. The oxygen concentration is always swinging between rich and lean. The more sensitive the oxygen sensor and accurate fuel injectors are, the swings between rich and lean are smaller. Newer air/fuel ratio or wide-band sensors can detect a wide range of fuel conditions. Also, these types of sensors warm up to operating temperatures faster.

The information from the oxygen sensor or air/fuel ratio sensor allows the engine management system to trim the fuel injectors open times. While there is the perfect Lambda number of 14.7 parts air to one part fuel for the best possible combustion, many engines will operate outside of these ranges. But, at the limits of Lambda, oxygen and fuel can combine with nitrogen, hydrogen and carbon to form compounds that are not good for the environment.

The catalyst efficiency monitor verifies the catalytic converter is operating at a high enough efficiency rating to keep exhaust emissions within the predetermined values. The PCM compares the signals from the upstream and downstream oxygen sensors to determine the state of the converter. These “tests” are called the readiness monitors.

Converter efficiency can be checked with a scan tool as well as watching the O2 switching between rich and lean. Lab scopes can also be used to monitor the switching. Once the efficiency drops below a specified level and other criteria are met, an efficiency code will be set.

Most converters start out at about 99 percent efficiency when new, and quickly taper off to about 95 percent. As long as the efficiency doesn’t drop off more than a few more percentage points, the converter will do a great job of cleaning up the exhaust. But if efficiency drops below 92 percent, it will usually turn on the MIL lamp.

Newer vehicles have to meet an even tougher Low Emission Vehicle (LEV) requirement. Now, there’s even less room for leeway. A drop in converter efficiency of only 3 percent can cause emissions to exceed federal limits. The LEV standard allows only 0.225 grams per mile of hydrocarbons.

Some OEMs have updated calibrations for the catalyst monitors. The new calibration can then be re-flashed into the PCM. If the vehicle already has a damaged converter, the re-flash will do nothing at all for it. But if the converter is near the threshold limit, the re-flash may extend the life of the converter and prevent the light from coming on for another 10,000 or even up to 80,000 miles.

Some operations can be either continuous, non-continuous or both, and can be checked during both types of monitors: such as a misfire or fuel system issues. Non-continuous monitors will differ between gas and diesel engines as well.

A newer vehicle can report its emission monitor status during its current driving cycle. These monitors start from the beginning whenever the monitoring cycle meets the criteria to run a readiness test. Older cars might not support this feature. Because the monitors are a self-check routine that the driver does not have to initiate, the best way to get them ready to perform a self-test is to drive the vehicle. Still, driving alone won’t meet all the needed conditions. There are a few requirements that vary from manufacturer to manufacturer.

A vehicle has to complete a “drive cycle.” The drive cycle is to let the car run its on-board diagnostics. This allows the readiness monitors to go through their preset diagnostic routine.

For the exact requirements of the vehicle you’re working on check the manufacturer’s specifications for a drive cycle. However, the following generic drive cycle usually works on most vehicles.

Pre-plan a route that will allow you to bring the vehicle up to highway speeds and allow you to slow the vehicle down on a long coast. Be sure to have at least 51% in the fuel tank, and the outside ambient temperature is not below freezing or above 110 degrees.

Most drive cycles begin with a cold start, meaning the coolant and air temperatures are within 10 degrees of each another (this condition can be achieved by letting the car to sit overnight). The ignition key must be in the OFF position before the cold start. Otherwise, the heated oxygen sensor diagnostic may not run. Start the engine and let it idle for about 2 to 5 minutes, with the A/C and rear defroster on (if equipped).

Keep in mind, the non-continuous monitors may not catch a problem until the vehicle has been driven several times and the conditions are right to detect the fault. Consequently, any time you’re troubleshooting a catalyst efficiency problem, it’s very important to use a scan tool that can tell you if all the monitor readiness have run or not.

If one or more monitors are not ready, the vehicle will have to be driven under the correct conditions to make the monitor set. Then, and only then, will you get an accurate diagnosis.