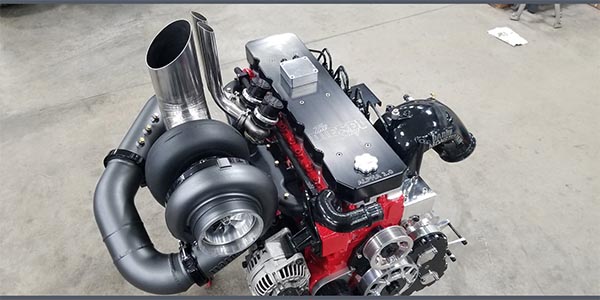 The Diesel Shop pulled out all the stops on this compound turbo 6.4L Cummins build.

Mike Wysowski always liked the idea of beating Mustangs, Camaros and Corvettes with a truck that weighed three times as much as those vehicles. That idea intrigued him enough to get into the diesel industry. “I wanted to start building trucks that were faster than normal,” Wysowski says.

At the age of 18, Mike began picking up knowledge and experience anywhere he could. He started working on larger trucks and pickup trucks. He got a job working on garbage trucks and on heavy equipment. Soon, Mike and a buddy, Scott Strong, started toying with the idea of starting their own side gig.

“We opened a shop working almost full time after another full-time job,” Wysowski says. “We started working on stuff on the side after leaving a full-time job as technicians for heavy equipment, trucks, moving vehicles, stuff like that. We would do that job for eight or 10 hours and then go and work on the side for probably eight hours, seven days a week. We were working over 100 hours a week for a good few years.”

About a year into that, an opportunity arose to rent a bigger building that would cost four times the amount they were paying at the time and would require an even bigger commitment.

With a bigger space and more work to get done, Mike and Scott hired their first employee, which Mike says was one of the scariest things he’s ever done.

“We hired one guy and it was probably the hardest thing we had to do because paying one more guy on top of paying ourselves was probably the scariest thing we’ve ever done,” he says. “It ended up turning out all right. We hired this guy named Mike who’s been working with us going on four years now.”

Today, The Diesel Shop, located in Avon, NY, has 10 full-time employees and an 8,000 sq.-ft. facility. Wysowski says he’s been trying to give other employees more responsibility so he can become less hands-on with the business.

“I’ve been trying to mold other people into managing roles and get myself away from the business a little bit more than what it used be because I was going insane pouring my heart and soul into everything, every day, all day,” he says. “I moved away a little bit and got my partner up to speed on managing the business and we kind of just all do the pieces we’re good at to keep the business rolling.”

The Diesel Shop does a wide array of engine work – essentially anything diesel related is fair game.

“We work on just about everything,” he says. “I don’t turn anything down. We originally started working with performance because there was nobody around here in our area doing performance. Then we started doing more heavy equipment, construction equipment, tractors, trailers, and dump trucks. There’s a salt mine down the road from here in Mount Morris. We go 1,200 feet underground and work on their equipment underground. We’ve done work for the Coast Guard on their diesel boats. We work on generators and air compressors. We’re also certified to work on propane-powered vehicles, so we do a lot of school buses as well as fire trucks and ambulances.

“I would say 85% of everything we do is trucks. We’re big Cummins fans here, but I like all of it. I would say there’s more issues with Powerstrokes and Duramax than Cummins, but there isn’t one that we see more than the other.”

The Diesel Shop does a lot of its work in-house, but its machine work is sent out to TW Automotive and Machine, which is Mike’s uncle’s machine shop.

“I always send everything over to my uncle Tom who has a machine shop,” he says. “We do disassembly and assembly in-house.”

One of The Diesel Shop’s more impressive performance builds was a 6.7L Cummins engine they built for the shop’s race truck. Mike bought a 2006 Dodge Ram four door short bed that had a 5.9L Cummins engine with 300,000 miles on it.

“I bought it from a kid who kept pretty good care of it,” Wysowski says. “It had a manual transmission. It started off as my daily driver. I ended up lifting it six inches, put 37-inch tires on it and we put on compound turbos, injectors, a clutch and some other stuff. I rolled around with that for a while and it started with 450 horse. We did some work and brought it up to about 750 hp and then brought it up to 850 hp and then it was at about 1,000 hp before I turned it into a race truck. I could do a rolling burnout at 75 mph in fifth gear on the highway.”

Once The Diesel Shop decided to turn it into a race truck, they yanked the 5.9L Cummins engine out and Mike purchased a 2014 Cummins 6.7L from a wrecked truck as a core. The goal with this 6.7L Cummins was to make the truck an Ultimate Callout Challenge contender.

“We built it to race locally and get our name out there,” he says. “We also wanted to compete in the Ultimate Callout Challenge, so that’s basically why we built the truck. We tore that engine apart and found that the pistons were broken half, so we took it over to my uncle’s machine shop, TW Automotive and Machine, tore it all the way down and built it all the way up with a deck plate.

“We put a Wagler deck plate on it. We bored and sleeved it. We changed the rod angle by adding a 1˝ deck plate, so we had Wagler’s 1˝ longer rods with Wagler’s 1˝ longer pushrods. We actually changed the size of the bore, so it really isn’t a 6.7L anymore. When we sleeved it, we sleeved with a tighter housing, so we put more meat into the sleeve rather than having the thin walls you would have had with a larger bore. It is technically a 6.4L now.

“We did some serious turbo and injector work using a Garrett compound turbo setup that was built by HSP. We ran a factory crank that was just basically ground and polished, which lasted well with all the power. We also still had coolant running through it, so it wasn’t a solid block.

“We had a ported head on there from D&J Precision. I took them a bare head basically and they ported it and then my uncle finished the machining. My uncle put bronze guides in it, which nobody was doing at the time.

“The engine also had Manley valves in it and a 14mm Gorilla girdle on there. Freedom Racing Engines helped us out with the upper valvetrain assembly, so they gave us some trunnions that were made by Trend and some other stuff. The pistons were Diamond coated pistons and the wrist pins were from Diamond.

“We also had to clearance the bottom of the cylinders for the extra rod size. We had a Hamilton cam and Hamilton lifters. We upgraded to Cummins stock rocker arms that had the steel tappet on the end. Hamilton springs were also in it.”

Wysowski admits, “that was a pretty kick ass set up.” He said it lasted three seasons and probably got about 80 passes out of it at full bore without having to do anything with it.

“For the race truck we use AMSOIL,” he says. “I always religiously ran AMSOIL in my race truck. I’ve been very happy with it. I’ve used it for the whole life of that truck, and it ran three seasons with no hiccups. It had a lot of power and took a lot of abuse. We pulled the injectors out of it and checked the sleeves and there were no issues. It’s still running today and she’s kicking ass.”

The compound turbo 6.4L Cummins ended up cranking out 2,100 horsepower and 3,160 ft.-lbs. of torque. To top it off, The Diesel Shop brought the truck to the 2019 UCC event and won first place in the overall qualifiers in their first appearance.

“We built it to the point where we can compete in that competition by putting in a quick release pulling set up, a drag set up and a dyno set up,” he says. “We also put a little nitrous through it. We didn’t do a lot compared to what the other teams were doing. We did some quick changes and then we won it. We just fed the engine with a lot of fuel and a lot of air, and then we added some nitrous to it and the thing is just killer.”