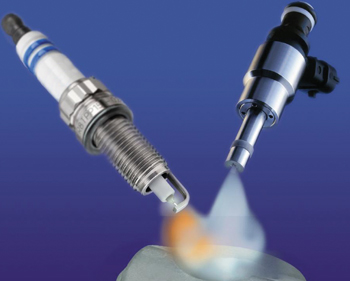 For the engine to start and run smoothly with no stalling, hesitation or misfiring, the injectors have to deliver the proper amount of fuel with every squirt. This is especially important on late-model engines with sequential fuel injection.

One bad injector will cause a noticeable misfire and usually set a P030X misfire code (where X represents the cylinder that is misfiring).

On older engines where the injectors are all fired simultaneously, the good injectors can often compensate for one or two bad injectors. Even so, for the engine to run right, fuel pressure to the injectors is critical as is the volume of fuel delivered by each injector when it fires.

If fuel pressure is low, disconnect the vacuum hose to the regulator. You should see an increase in pressure if the regulator is not leaking. No change would indicate a bad regulator. 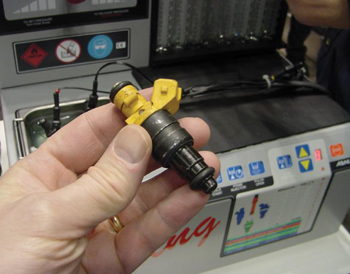 If fuel pressure is less than specifications, the regulator may be leaking. You can pinch or block the return line temporarily to see if pressure goes up. If it does, it means the regulator needs to be replaced. If there is no change, the problem is a weak fuel pump or a restriction in the fuel line such as a plugged fuel filter.

Getting Dirty
Another common problem with fuel injectors is the buildup of fuel varnish deposits in the nozzle that restrict fuel flow or disrupt the injector’s spray pattern. On many late-model engines, the shape and direction of the spray pattern is critical for clean combustion and good performance. If the injector nozzle is dirty, the pattern may be distorted or deflected to one side, causing a lean spot in the combustion chamber that can cause misfire, or even preignition or detonation. 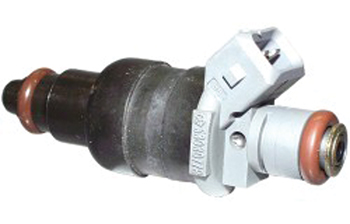 Gasoline is supposed to contain enough detergent to prevent these deposits from sticking and accumulating in the injectors. But guess what? Not all gasoline is the same. Some brands contain much lower levels of detergent than others. Consequently, filling up with the cheapest gas one can find may not be the best idea in the long run — especially for short trip, stop-and-go city driving that causes deposits to form at a much faster rate.

The cure for dirty injectors is to clean them (on-car or off-car with special injector cleaning machine), or to replace them if cleaning fails to restore a normal flow rate and nozzle pattern. 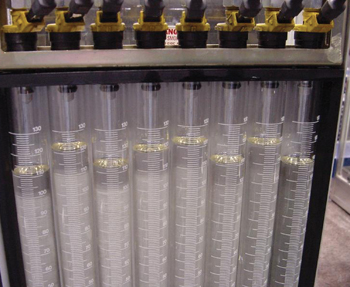 Typically, when injectors fail, the solenoids often short internally causing a drop in resistance. If the specification calls for 3 ohms, for example, and an injector measures only 1 ohm, it will pull more current than the other injectors. Too much current flow to an injector may cause the PCM injector driver
circuit to shut down, killing any other injectors that also share that same driver circuit.

One way to check the injectors is with an ohmmeter (key off). Disconnect the wiring connector from each injector, and measure the resistance between the injector’s terminals. Look up the specifications, rather than guess. Some specs may call for 2 to 3 ohms of ­resistance (typical for “peak and hold” injectors), while others require 12 to 16 ohms of resistance (“high-resistance” injectors). The specs are fairly narrow, and with good reason.

So if the factory specifications call for 12 to 16 ohms of resistance, and you find several injectors that are only a few ohms higher or lower, the injectors should probably be replaced.  And if the injector resistance readings are significantly higher or lower than specifications, there’s no question they need to be replaced.
Another method for finding weak injectors if you don’t have specs is to measure and compare the ­resistance of all the injectors. If you find one or two that are noticeably lower or different than the others, they probably need to be replaced.

Scoping the Circuit
If you have an oscilloscope with a low-amp probe, you can also observe the current flow through the injectors with the engine running. You don’t have to unplug anything. Just clamp the amp probe around one of the injector connector wires.

When the PCM energizes the injector, current starts to flow through the circuit. This causes the waveform on the scope to ramp up. When current reaches about 70% of maximum, the injector usually opens, creating a bump in the pattern. When the PCM opens the ground circuit to turn off the injector, the pattern drops back to zero.

On engines that have low-resistance peak-and-hold style injectors, the scope will typically show a pattern with a sharp peak that drops to a plateau until the injector turns off, then it spikes again (two peaks total in the pattern). The peak is typically at 4 amps and the hold (plateau portion of the pattern) is at 1 amp. 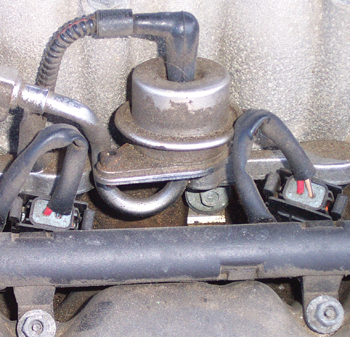 On high-resistance injectors, a shorted injector that fails to open won’t produce a bump in the pattern. And if you see a sharp vertical rise in the current pattern, it means the injector is bad.

On most vehicles, the injectors receive battery voltage when the ignition is on, and the PCM driver circuit provides the ground connection to turn the injectors on and off. Therefore, if you have a dead injector, one of the first things to check would be voltage at the injector terminal. If it’s less than battery voltage, there may be high resistance in the connector or wiring harness. If more than one injector is getting low voltage, the fault may be a bad injector power supply relay.

When the PCM energizes (grounds) the injector circuit, the voltage reading on the supply side should drop to zero as long as the injector is energized. This verifies the PCM ground drive circuit is working and that current is flowing through the injector.

Flow Matching
If you have an injector-cleaning machine with graduated cylinders, you can flow match injectors for optimum performance. New OE injectors may show as much as 4 to 5% from one another. Once flow rates start to vary more than about 5%, you can get noticeable driveability problems on many late-model engines.
For best performance, most experts recommend flow matching all of the injectors to within 2% of each other.

Under the Hood: Feeling the Pressure

How To Install Struts