Bosch is celebrating the 30th anniversary of the pioneering automotive anti-lock braking system (ABS), a landmark contribution to driving safety. Developed by Bosch and first introduced in 1978, ABS has been a major step forward for motorists and the automotive industry worldwide, and paved the way for electronic stability control systems. 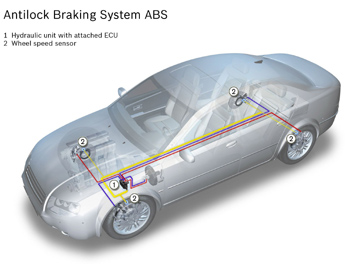 Since Bosch introduced electronically controlled ABS to the automotive market, this groundbreaking technology has become the basis for all modern brake regulating systems. Today, nearly 75 percent of vehicles are fitted with ABS. Bosch systems such as the Electronic Stability Program (ESP) and the Traction Control System (TCS) that are based on ABS are now successfully embraced by the world’s motorists.

Today, Bosch is the largest supplier of ABS systems to the world’s vehicle manufacturers.

"A car fitted with ABS will brake effectively without locking the brakes and possibly skidding, allowing the driver to steer and keep the car under control even in sharp braking. The vehicle remains stable, and ABS really improves the way we drive."

Bosch provides comprehensive technical and marketing support on ABS to installers, and the Bosch technical hotline used in conjunction with Bosch Diagnostics helps ensure that the vehicle receives expert attention and care.

"The electronically controlled ABS has been a truly revolutionary advance for motorists around the world. And Bosch is proud to have brought it to the automotive marketplace and to support it," Backode said.