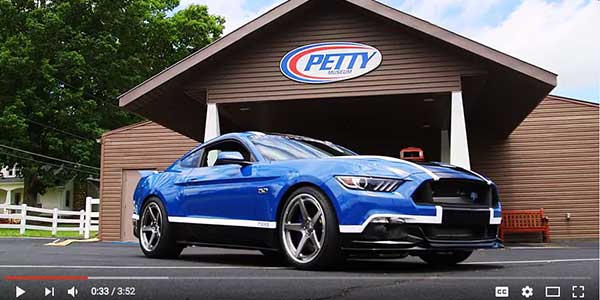 The video goes into extensive detail about the build-out of the twin-turbo engine, using the stock Ford Coyote engine block, but with a number of significant upgrades, utilizing MAHLE Motorsport, MAHLE Original and Clevite Performance components.

The second video of the “MAHLE Mustang Build” series, highlighting the build-out of the twin-turbo engine utilizing MAHLE and Clevite components, has been posted to the MAHLE North America YouTube channel. The MAHLE Ford Mustang was constructed by the team at Petty’s Garage in Level Cross, North Carolina, as the grand prize in the MAHLE “Drive with the Original” Technician Promotion.

The video goes into extensive detail about the build-out of the twin-turbo engine, using the stock Ford Coyote engine block, but with a number of significant upgrades, utilizing MAHLE Motorsport, MAHLE Original and Clevite Performance components. It is available for viewing at the MAHLE Aftermarket YouTube channel.

“I was able to visit Petty’s Garage and see first hand how their team of technicians have worked so hard on putting this incredible machine together,” said Jon Douglas, president of MAHLE Aftermarket Inc. “We are proud, and extremely excited at the same time, that the engine for this beast will be generating phenomenal horsepower thanks to the quality and reliability of MAHLE components.”

Future episodes in the video series will provide additional highlights of the Mustang build, including the final installment where viewers will get a glimpse of the dyno testing of the vehicle.

The “Drive with the Original” promotion runs through Oct. 1. Four finalists will be randomly selected from all entries to receive an all-expense paid trip for two to the 2017 AAPEX in Las Vegas, taking place from Oct. 31 to Nov. 2. The “Original,” Richard Petty, will be present when the finalists select a key fob, one of which will start the engine of the customized, twin-turbo 1,000 HP Grand Prize MAHLE Ford Mustang from Petty’s Garage.

Complete information about the “Drive with the Original” promotion, including official rules, terms and conditions, can be found at drivewiththeoriginal.com. Information to participate in the promotion also is available on specially marked MAHLE Original gasket boxes.

For more information about MAHLE Aftermarket and its brands, visit mahle-aftermarket.com or contact a local sales representative.