Have you ever seen the inside of an aluminum water pump that was not adequately protected by the corrosion inhibitors in the coolant? Or a radiator or heater core that failed from the inside out because of internal corrosion? 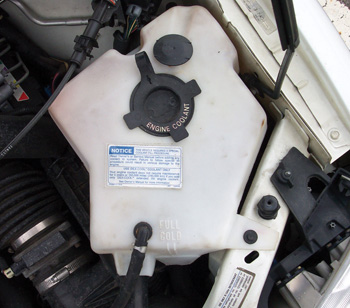 These kinds of parts failures are all too common. Yet they can be easily prevented by using the “right” coolant and changing the coolant before trouble starts to heat up.

All types of antifreeze contain corrosion-inhibiting chemicals to protect bare metal surfaces from electrolytic attack. Though automakers disagree on which chemical additives work best in their vehicles, essentially any kind of antifreeze will work in any vehicle. But, how well will it protect the cooling system? And, for how long? And will it void the OEM warranty? These are important questions that need to be answered before choosing an antifreeze for a particular vehicle application.

Of course, always refer to the repair manual before performing coolant service or even topping off your customers’ vehicles. But that information isn’t always readily available.

Creating Confusion
What makes choosing the right coolant so confusing today is that the automakers themselves can’t agree on what type of coolant chemistry is best for their vehicles. Some vehicle manufacturers prefer one type of corrosion inhibitors in their coolants, while other  vehicle manufacturers may insist on a different type.

The fact is, all types of antifreeze contain additives to protect the cooling system against corrosion. So you wouldn’t think it would make any difference which one a customer actually decided to use. But some corrosion inhibitors are not compatible with others, and if the chemistries differ too much it can reduce the coolant’s ability to prevent corrosion as the coolant ages.

To distinguish one type of coolant from another, vehicle manufacturers add colored dye to their coolants. Unfortunately, the colors they use are not necessarily standardized and do not always conform to the same chemical specifications.

Because of this, two different coolants may use the same color dye, or two similar coolants may use different colored dyes. Most standard formula antifreeze is dyed green, but there are also some standard formula coolants that are yellow. Long-life coolants are typically orange or yellow, but some may also be red, pink, blue, purple or
even green. Go figure. Consequently, the idea of matching colors when choosing a coolant doesn’t always guarantee success.

The Standard Green
Standard green formula antifreeze is the type that most North American vehicles used until the introduction of extended-life coolants back in the mid-1990s. This type of coolant contains fast-acting silicate and phosphate corrosion inhibitors that protect cast iron engines, bi-metal (cast iron/aluminum) engines, and copper/brass and aluminum radiators.

“IAT” (Inorganic Acid Technology) is the traditional “green” formula antifreeze. This is the stuff General Motors used until 1996, Chrysler used until 2001, and Ford used until 2002 in its trucks and 2003 in its passenger cars. The green additive package contains phosphate and silicates, and provides good protection for cast iron and aluminum engine parts, as well as copper/brass radiators in older vehicles and aluminum radiators in newer vehicles.

The corrosion-fighting chemicals are fast-acting, but wear out after two to three years or 36,000 miles of average use, so green coolant needs to be changed periodically to minimize the risk of corrosion damage.

While this type of coolant is primarily for older vehicles (pre-1996), it can also be used in virtually any vehicle application (domestic, Asian or European) regardless of year — provided all of the old coolant is completely flushed and replaced with new.

Extended Life OAT Formula
Antifreeze that is dyed orange typically contains “Organic Acid Technology” (OAT) corrosion inhibitors such as sebacate, 2-ethylhexanoic acid (2-EHA) and other organic acids, but no silicates or phosphates. The most familiar OAT-based product is Dex-Cool, which General Motors has used since 1996. Orange formula coolant is also used in the Mercury Cougar, and 2003 and up Saabs. Similar formulas include a pink-colored coolant in late-model Audi and Volkswagen vehicles and a dark green coolant in Hondas.

The corrosion inhibitors in OAT coolants are slower acting than standard green formula coolant, but last much longer. The service life for this type of coolant is five years or 150,000 miles — which seems like a long time, but it is not a lifetime coolant. Eventually the corrosion inhibitors wear out and the coolant needs to be changed. Many people don’t know this and falsely assume they never have to change the coolant. So they don’t, and six or seven years down the road the radiator or heater core rots out because of internal corrosion.

Extended Life Hybrid Coolants
Silicated Hybrid Organic Acid Technology (HOAT) antifreezes, which are sometimes referred to as “G-05” formula coolants, contain organic acids in combination with one or more inorganic inhibitors. The most common inhibitor is silicate. The addition of silicates increases corrosion protection for aluminum engines, radiators and heater cores, and helps protect the water pump against erosion wear. Silicated hybrid OAT coolants are specified for 2001 and up DaimlerChrysler vehicles, 2002 and up Ford trucks and SUVs, 2003 and up Ford passenger cars, and 1985 and up Mercedes, BMWs, Volvos and Mini Coopers.

Coolant Flow:
Just remember that no coolant is a lifetime coolant. The coolant may last a long time, but, eventually, the corrosion inhibitors wear out. Many motorists don’t know this and falsely assume they never need a coolant change. Consequently, when they neglect the coolant, they can experience radiator, heater core and freeze plug failures from internal corrosion.

Universal Formulations
Universal formula antifreezes are marketed as being suitable for all passenger cars and light trucks, regardless of year, make or model, or the type of coolant that’s already in the cooling system. Some of these claims have been challenged in court on the basis that no single additive package can match the conflicting requirements of different OEM coolants. Even so, the makers of universal coolant say their products can be used in any vehicle, whether it matches the original coolant chemistry or not.

The universal coolants use OAT-based corrosion inhibitors with proprietary organic acids to provide broad spectrum protection. The coolant may be dyed yellow or amber (yellow-orange).

The service life of most universal formula products is typically five years or 150,000 miles — with one exception. When used to top off a cooling system in an older vehicle that contains standard green formula coolant, the service life of the product is reduced to that of the original coolant, which is two to three years or 30,000 miles.

The main advantages of a universal coolant is that it simplifies the selection process to a single product, and it eliminates the need to carry three different types of coolant (green, orange and yellow hybrid) to cover the market.

Those who are opposed to universal coolants say one product cannot match the conflicting coolant requirements of all the different vehicle manufacturers, and that it is safer to offer three different types of coolants that meet these specifications. Consequently, many parts stores carry not only the three basic types of coolant just described (often in several different brands) but also a universal coolant for customers who prefer that type of product.

When choosing a coolant, therefore, refer to the vehicle owner’s manual for the type recommended (or the label on the coolant reservoir under the hood) to find a coolant that meets the OEM requirements. Or, you may want to choose an acceptable universal coolant.