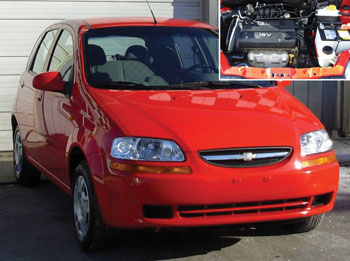 As a rule, General Motors uses timing chains rather than timing belts on most of its engines. Timing chains are long-lived and reliable, and do not have a recommended replacement interval. Not so with timing belts.

One GM engine that does use a rubber timing belt is the 1.6L E-TECH II engine in the 2004 and up Chevrolet Aveo. The Aveo is an entry-level economy car made in South Korea for Chevrolet by Daewoo Motors (which General Motors purchased several years ago after Daewoo filed for bankruptcy).

The Aveo’s engine is a dual overhead cam design with a single timing belt on the front.
The layout is fairly conventional with an idler pulley and a tensioner keeping the belt in place, and a belt-driven water pump on the front of the block. The timing belt is hidden under a two-piece cover.

The factory recommended “inspection” interval for the timing belt on this particular engine is 30,000 miles, and the recommended replacement interval is 60,000 miles.

Many motorists are unaware of these recommendations and typically do nothing until the timing belt fails — which is bad news because the 1.6L E-TECH II engine is an interference engine. If the timing belt breaks, one or more valves will hit the pistons and damage the engine. The repair may require replacing one or more valves, possibly a piston or two, and maybe even the entire cylinder head. The repair bill can easily total $1,600 to $2,000 for parts and labor.

To make matters worse, some of the OEM timing belts on these engines have not even made it to the 60,000-mile mark. There have been numerous reports of timing belts failing at 40,000 to 50,000 miles.

In October 2006, General Motors issued a technical service bulletin (TSB 06-06-01-021) offering motorists a free “goodwill” replacement timing belt (parts only, labor not included) for vehicles with 30,000 to 55,000 miles on the odometer that still have the original timing belt. GM said they wanted to examine the original belts for possible defects.

The free belt offer is for a limited time only, and does not apply to vehicles with more than 55,000 miles on the original belt. GM says it is the vehicle owner’s responsibility to maintain their vehicle properly, and to have the timing belt inspected at 30,000 miles and replaced at 60,000 miles. Consequently, if the belt has never been replaced and it breaks, so sad too bad.

If the shop you are employed at has a customer who drives an Aveo, or you know someone with that car, you should make it a point to see if the timing belt has ever been inspected or replaced. If the car has more than 60,000 miles on it and the belt has never been changed, you should advise your customer the belt needs to be replaced — and the sooner the better.

Replacement belts for this engine cost about the same as other engines (GM’s list price is around $90 for a new belt, P/N 96417177). Aftermarket prices for a replacement belt may range from under $30 to $65 or more. 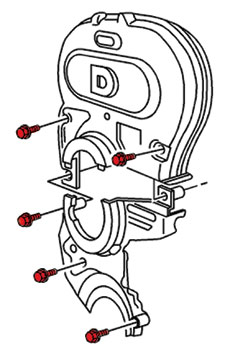 The labor to replace the belt, pulleys and water pump is around two hours, so with parts the total repair bill may be $400 to $600 — which is a lot cheaper than pulling the head to repair the damage caused by a broken timing chain. Even so, it can be a tough sell because the people who buy these cars are trying to save money, not spend money. But trying to get by as cheaply as possible by scrimping on recommended maintenance can be very costly on this particular car.

Timing Belt R&R
Like all timing belt replacement jobs, the timing belt cover on the front of the engine will have to come off. But first you have to get some other parts out of the way. Start by disconnecting the battery.

Then remove the intake air temperature (IAT) sensor connector, the air intake tube from the throttle body, the breather tube from the valve cover, and the air filter housing. Next, remove the right front wheel so you can remove the splash shield behind it.

Next, you can remove the upper timing belt cover, then the lower cover. See Figure 1.
The power steering pump bolts will also have to come out. 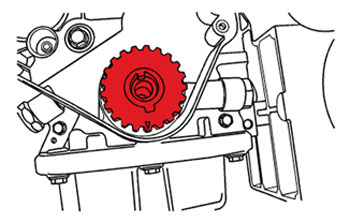 Now you can loosen the water pump bolts and rotate the pump counterclockwise with special tool J42492-A (KM-421-A) to relieve tension on the belt. The timing belt can now be slipped off. Don’t disturb the position of the crankshaft or camshaft pulleys until the new belt is in place.

As we said earlier, it’s a good idea to go ahead and replace the water pump, idler and tensioner pulleys at this time, too. 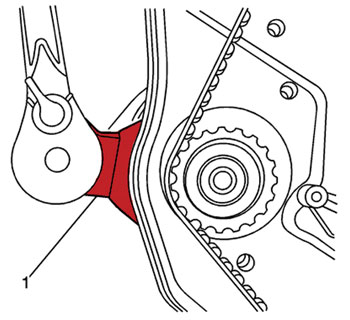 Once the new parts have been installed, use the J42492-A tool to rotate the water pump clockwise to tension the timing belt. See Figure 3.

Continue rotating the water pump clockwise until the adjuster arm pointer on the automatic timing belt tensioner aligns with the notch in the tensioner bracket. You can now tighten the water pump bolts. 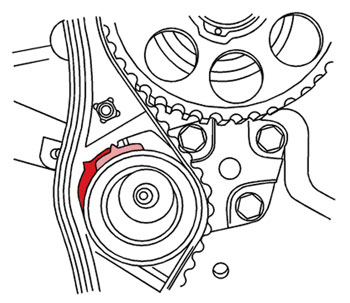 You don’t want a loose tensioner because it might allow the belt to slip and jump time. You also don’t want the belt too tight because that can shorten the life of the water pump shaft bearings and seal as well as the timing belt.

Once the belt has been properly tensioned and double-checked to make sure the timing marks are correctly aligned, you can put everything back in the reverse order it was taken apart. The recommended torque for the crankshaft pulley bolt is 70 ft.-lbs. (95 Nm) plus and angle turn of 30° followed by a final turn of an additional 15° (use a torque wrench and angle gauge to be accurate).

Also, when you remount the right front wheel on the car, use a torque wrench on the lug nuts.

Finally, advise your customer to have the timing belt inspected again when another 30,000 miles have elapsed, and to have it replaced a second time at 120,000 miles‚ and every 60,000 miles thereafter for as long as the vehicle remains on the road.
For more on servicing the timing belt on compact Ecotec engines, see the Step-by-Step process that follows this article.

The engine of the Opel Vectra B 1.6i 16 V and other GM-designed Ecotec engines with similar displacement are installed in vehicles in the U.S. and throughout the world. Usually, changing the timing belt is not problematic, even for techs who are not practiced in changing such belts. Nevertheless, serious mistakes are often made when adjusting the tensioner pulley. Here are some easy-to-understand installation tips to ensure that the belt change proceeds as smoothly as possible.

Tip: Each time a timing belt is changed, the oil pump should be checked for cracks where the tensioner pulley is attached. 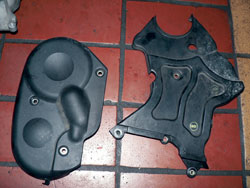 5. Release tension from the V-ribbed belt clockwise and remove.
6. Remove the right front wheel, dismantle the wheel well panel and remove the vibration damper/belt pulley. See Photo 2.
7. Now remove the lower belt cover. See Photo 1, right side.
8. Turn the engine to the top dead-center position (TDC). The TDC position has been reached when the crankshaft mark points down vertically at the housing mark  and the camshaft pulley markings point toward each other horizontally. See Photo 3.
9. Here, the locking tool is positioned between the camshaft pulleys.
10. Now loosen the tensioner pulley bolt and remove the slackened timing belt. See Photo 4. 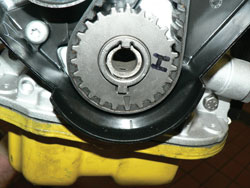 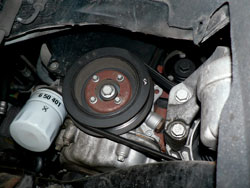 TORX bolt provided. The pointer on the tensioner pulley should now be on the right stop.

This is extremely important, since otherwise the belt drive will start making noise in a short time due to insufficient tension.
The engine is now rotated by hand in the running direction at least twice. Be certain to first remove the locking tool.

2. Loosen the fastening bolt of the tensioner pulley and position the pointer tip on the notch. See Photo 6. 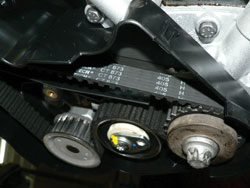 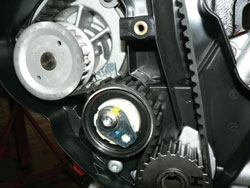 Rotate the engine drive twice once again, check the setting again and readjust if required.

Tip: Make sure that the tensioner pulley does not touch the impeller of the water pump, especially if the water pump has been replaced at the same time. Make certain that the water pump is positioned correctly (off-center installation).
See Photo 7.

4. Now mount the lower cover of the timing belt, the vibration damper (tightening torque: 95 Nm +30° +15°) and a new V-ribbed belt. Turn the tensioner pulley, thus tensioning the belt (tightening torque: 20 Nm). Next, mount the front right wheel. Let the vehicle down and mount the upper timing belt cover. Make certain that the air filter housing and the plug for the air mass sensor sit properly. 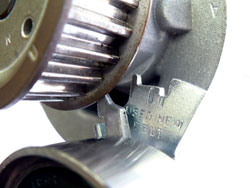 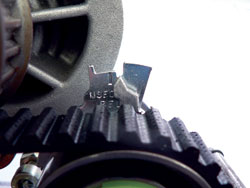