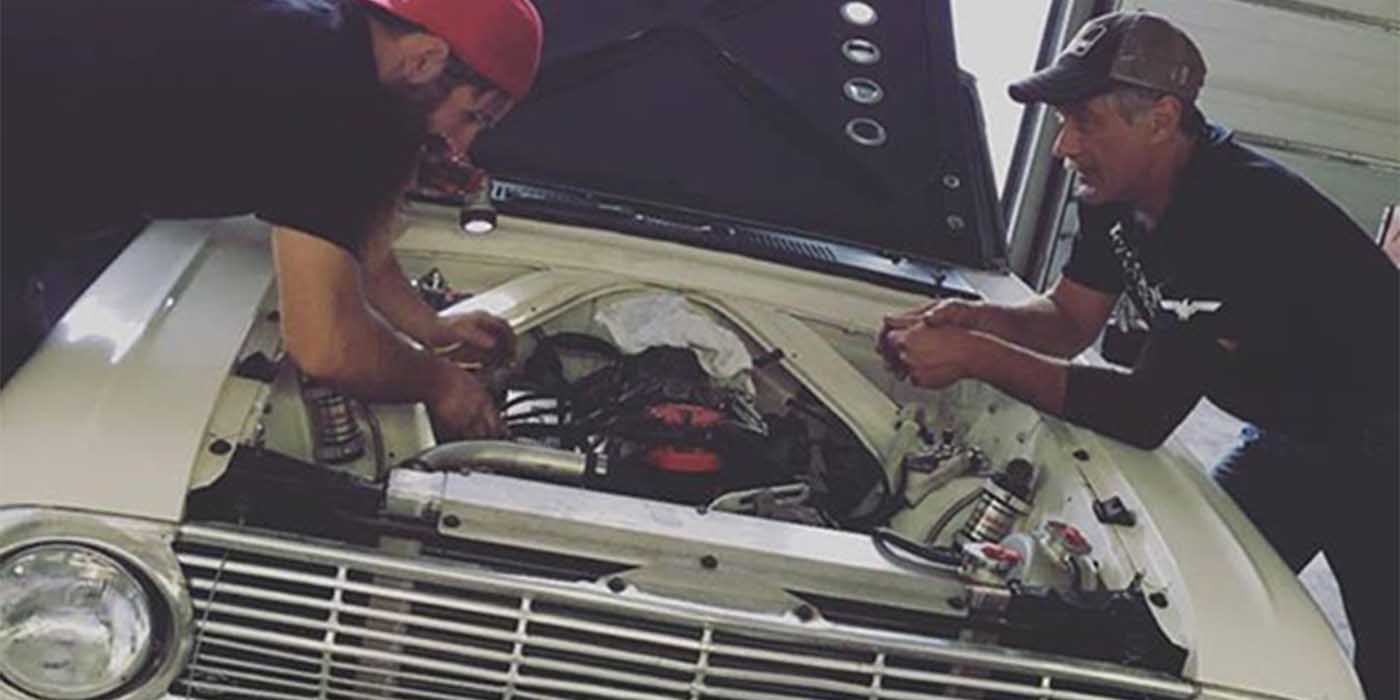 When you think about diesel engine building profit potential you may consider the on-track activities of boosted turbo diesels like the 6.6L Duramax, the 5.9L Cummins or the 6.0L Power Stroke. Impressive engines, and it’s really no surprise to see sub-11 second runs from trucks

that often double as daily delivery vehicles at drag strips across America.

For one Ohio engine builder, however, thousands of high performance diesel builds start at 6 cylinders and go rapidly up from there.

Robert Ball, a recovery process engineer with the Detroit Diesel Remanufacturing Facility in Byesville, OH, has been wringing more performance out of even the biggest diesels for a long time now – and sees no reason to pull the parachute just yet.

“Just about anything that’s got to do with a big truck and going fast, we’ve been involved in, it seems like the past dozen years or so,” says Ball.

He says he was raised around diesel engines and spent his formative years with his uncles and cousins, learning about equipment and how to make it run better. “Our family had a limestone mine and we were always down there, tinkering around. What really did it for me was a friend’s pulling tractor – it had an 8V92 Detroit Diesel engine with four turbos and I always thought it was just too cool. I wanted to know how do we make it go a little quicker?”

Blame the instructors at Ohio Diesel Tech (now the Ohio Technical College) in Cleveland for answering that question and putting him on the path of always trying to make diesels do far more than they’re supposed to do.

“That was back in 1984, and by 1987, I was working at Detroit Diesel. I didn’t get a chance to get into the performance too much until a few years later, when we put in the Series 60 remanufacturing line and added the dynos. Our plant manager said to me, ‘You know, we have a 1,000 horsepower dyno but none of the engines we build are over 500 horse. You think you’re pretty smart – why don’t you put one of these things through its paces on the dyno – see what it can do. Stress test this dyno.’ Challenge accepted.”

Ball says he pored over the blueprints and timing tables and looked at all of the engine parameters on the computer. “I said, ‘Alright, we’re gonna try this.’ We hooked it up to the dyno and started cranking it. He said, ‘Well, it’s only putting out 500.’ And I said, ‘Well, are you ready?’ He was pretty skeptical, until I slid it from what was about half throttle up to about 80 percent. At that point it was reading 1,100 hp. So I slid it back and asked my manager, ‘Good

Ball says he learned what so many others have about diesel engines: the potential to double the horsepower is already there, hidden in the computer, the turbocharger and the turbo maps. “We just need to marry those up to the rpm and engine airflow just like anything. We changed the compression down so that I could pack it with more air without lifting the cylinder head off.”

A recovery process engineer with Detroit, Ball explains that the 350-400 heavy-duty engines travel the assembly line each month – 60 Series and DD Series engines destined as replacement engines or for installation into one of the popular glider kits serving the trucking industry. In addition, Ball anticipates that a new production line will be coming online soon.

Frequently called upon to be a “fixer,” both for the in-facility operations and outside engine activities, Ball says keeping the factory on track is important – but going beyond is where the fun is.

As part of the team of engineers responsible for pro racer and stuntman Mike Ryan’s Pikes Peak Hill Climb efforts, Ball has had factory support to push an engine beyond its limits.

The 60 Series in Mike’s Freightliner Cascadia has gone through many different configurations over the past several years, says Ball.

“We’ve changed the camshafts, shaved the pistons and changed the compression on it a little bit,” Ball admits.

The engine uses modified OEM parts and Ball and crew have had to contend with issues ranging from ego to altitude, weather and wrecks. The course at Pikes Peak climbs almost a mile in elevation over a 12½-mile road with 156 turns and no guardrails. Experts say the air is so thin that engines are 30 percent less efficient at the summit than at the start of the run. Engine tuning is key.

In 2014, Ball heard about some guy who needed help tuning his carburetor for a run up the mountain. “Some guy” turned out to be Aaron Kaufman, celebrity automotive expert and star of Shifting Gears and other shows.

“Guys were saying ‘Don’t you know who he is?’” says Ball. “Yeah, I knew, but at that time he was just a guy trying to get his car ready for a race. He asked me for some help, so I called my friend Bob Boileau who owns Pikes Peak International Raceway. I said, ‘Any chance I could bring a vehicle down there and do some testing?’ I explained to him what was going on. So we went down there and just kept tweaking and dialing in and got him to where he wanted it. Aaron was comfortable with it and since then we’ve had some chances to work together.”

Ball is being modest – he has been involved with several “Shifting Gears” episodes, has built an engine for Kaufman and even got him involved in semi-truck racing in the Bandit Racing Series. Ball, part of one of the original Champ Truck Racing Series teams and one of the founders of the Bandit Series (see Engine Builder, March 2018), was able to bring Aaron to a race at Greenville/Pickens Speedway in the series’ inaugural season.

“We got with some sponsors to get Aaron to race and that place was packed – people were so excited,” Ball says. “Then my son Justin ran him clear over at the end of the first lap.”

Ball says inexperience caused the problems. “Aaron got all squirrely, got sideways, two trucks wrecked behind him and Justin dove underneath them all, because being one of the fastest trucks, he started at the back of the heat. He ducked down to pass, Aaron let off the brakes at the most inopportune time and drifted right down in front of him. Justin was still on the throttle.” It did make for a spectacular show, Ball admits.

Another spectacular show occurs annually on the Salt Flats of Bonneville, when vehicles of all size, shape and engine configuration meet to compete for land speed records. To get to the salt, Ball says he first took a trip to the woods.

“I have a friend in Washington who supplies our remanufactured engines in various types of heavy equipment to the logging industry – he’ll regularly ask me to configure an engine for a totally different application. ‘Whip me up something,’ he’ll say. So I have to configure an engine to put out 600 hp and fit into this nice little package, make sure everything’s going to cool correctly and run in extreme environments all over the world.”

When this same friend revealed he is part of the Joint Venture Racing Team, which repeatedly sets and breaks records at Bonneville, Ball was impressed. When he admitted the team was configuring an engine that was NOT a Detroit Diesel, Ball was intrigued. And when he asked for help to help solve the engine issues, Ball was on the next flight from Columbus, OH to Salt Lake City.

“The team was talking back and forth with MTU when they said to me, ‘MTU is giving us an engine. How would you configure it?’ I told them, in all honesty, the 16V2000 isn’t even an engine I know!”

Still, after the late nights and all the research, Ball says he gave the team an engine build recipe he was confident would exceed their expectations. “They were able to do most of what I recommended, except for the pistons, which meant the calibration wasn’t quite right.

“Unfortunately, it melted the pistons right there on the Salt Flats,” Ball says. “I made a phone call to my buddy from MTU, who was willing to give us core parts to put it back together. So we got our team to get the engine apart to see what the damage was like. We proceeded to tear this 32-liter engine down on the Salt Flats with hand tools. Friends came by and asked, ‘What do you need us to do?’ It was like ‘game on’ – there were 20 people working on that thing. Guys tearing it apart over here, guys over there cleaning it.”

The next morning, team owner Don Lemmons and Ball took off for the Detroit Diesel Remanufacturing West facility in Tooele, UT. “We needed the cylinder kits and some cylinder heads so several of us tore down a donor engine and were back on the highway in less than two hours. The team started putting it all back together, until the Bonneville officials threw us out of there around 7:30 or 8:00. For safety, you’re not allowed out on the salt at night.”

Ball says the next morning the team was up with the sun, buttoning up the engine and preparing to fire it up. The team replaced 16 sleeves and pistons as well as some of the cylinder heads. “We had to do that,” says Ball, “because parts of some of the pistons had literally melted into the head.”

Ball says 2017 marked his second trip to Bonneville and was memorable – almost in a record-setting way. “The record for that class is 228.804 mph (set and held by this team in 2006). We almost had the world record last year but we had some water lines separate underneath the truck, and it basically created a five-mile burn out for the truck. And it still went out the back door at 229 miles an hour. Unfortunately, the team had to back it up with a repeat run in the same mile coming back.”

“I told ‘em, the cuffs are off this year. I’ve had ideas I’ve been unable to do. This year I’m concentrating on two trucks and I know there are a lot of things I can do with coating technology, anti-friction additives and some great aftermarket products.”

However, concentrating on two trucks doesn’t mean Ball will be bored. “If it has something to do with a semi truck, I’ll probably be involved somehow. They just had a big diesel drag race with bobtail tractors in Onaway, MI. I had to help tune a truck across the internet. And everyone around my personal shop knows if they have a diagnostic question they can just pop in.”